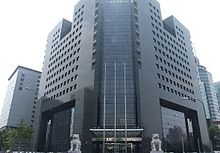 China Construction Bank (CCB; simplified Chinese: 中国建设银行; traditional Chinese: 中國建設銀行; pinyin: Zhōngguó Jiànshè Yínháng; often abbreviated as 建行; SSE: 601939, SEHK: 0939) is one of the 'big four' banks in the People's Republic of China. To date, it is ranked as the nation's second largest[2] and the second largest bank in the world by market capitalization and 12th largest company in the world[3][4]. The bank has approximately 13,629 domestic branches. In addition, it maintains overseas branches in Frankfurt, Hong Kong, Johannesburg, New York, Seoul, Singapore, Tokyo, and Sydney, and a wholly owned subsidiary in London. Its total assets reached 8.7 trillion RMB in 2009.[5]

CCB was founded on 1 October 1954 under the name of "People's Construction Bank of China" (Chinese: 中国人民建设银行; pinyin: Zhōngguó Rénmín Jiànshè Yínháng), and later changed to "China Construction Bank" on 26 March 1996.

In January 2002, CCB Chairman Wang Xuebing resigned from the bank after being charged with accepting bribes while he was employed with Bank of China. He was later sentenced to 12 years in prison for the crimes. In March 2005, his successor, Zhang Enzhao, resigned for "personal reasons." Just prior to his resignation, he had been charged in a lawsuit with accepting a $1 million bribe. He was later sentenced to 15 years in jail in connection with the case.[6][7]

China Construction Bank Corporation was formed as a joint-stock commercial bank in September 2004 as a result of a separation procedure undertaken by its predecessor, China Construction Bank, under the PRC Company Law. Following the China Banking Regulatory Committee's approval on 14 September 2004, the next day the bank (Jianyin) became a separate legal entity, owned by the Chinese government holding company, Central Huijin Investment Company or simply Huijin.

Investment by Bank of America

In 2005, Bank of America acquired a 9% stake in China Construction Bank for $3 billion. It represented the company's largest foray into China's growing banking sector. Bank of America currently has offices in Hong Kong, Shanghai, and Guangzhou and sought to expand its Chinese business as a result of this deal.

In May 2009, speculation was raised that $7.3bn worth of CCB shares had been sold by BoA, to help bolster capital during stress testing.[9]

In 2006, CCB acquired Bank of America (Asia), which started in 1912 in Hong Kong as Bank of Canton, and had a subsidiary in Macao.

In 2008, CCB submitted an application to the NY State Banking Department and the Federal Reserve Board to establish a branch in New York City.[10][11] CCB officially opened its New York branch on 6 June 2009.

China Construction Bank is a member of the Global ATM Alliance, a joint venture of several major international banks that allows customers of the banks to use their ATM card or check card at another bank within the Global ATM Alliance with no transaction fees when traveling internationally. However, handling costs and VISA processing fees may be applied. Other participating banks are: