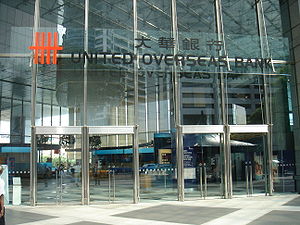 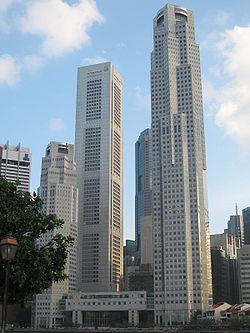 The two towers of the UOB Plaza, located on the southern bank of the Singapore River. OUB Building is in the background.

Singapore's United Overseas Bank is raising its stake in Indonesia's PT Bank Buana Indonesia. In a statement, UOB said its wholly owned subsidiary - United Overseas Bank International Investment (UOBII) - had entered into an agreement with P.T. Sari Dasa Karsa for the acquisition of 1,729,872,821 shares in P.T. Bank Buana Indonesia Tbk. The completion of the acquisition is conditional upon certain matters, including the execution of a definitive sale and purchase agreement, and obtaining regulatory consents. On 15 July 2005 , UOB requested trading in its shares to be halted pending an announcement. The company has requested the lifting of trading halt on 18 July 2005. UOB currently owns 23 percent of the issued common shares in Bank Buana. After completion of the acquisition, its shareholding will increase to 53 percent and Bank Buana will become a subsidiary of UOBII. Upon completion of the acquisition, UOB will conduct a tender offer for the rest of the shares in Bank Buana.

The total consideration for the sales is approximately S$285 million. UOB intends to fund the acquisition using internal resources. The Singapore lender bought a 23 percent stake in Bank Buana for S$196 million in 2004 [1]

United Overseas Bank has said it is selling 66 of its 67 Philippine branches to Banco de Oro Universal Bank, in a move aimed at rationalising its operations in the country. The deal is worth 600 million pesos, or S$11.1 million, and is subject to due diligence and regulatory approval. UOB Philippines was in the red to the tune of some S$21 million in 2004, due to a poor business environment. In 2003 it booked a loss of S$19.7 million. UOB said it was converting UOB Philippines into a thrift bank, focusing on wholesale banking and fee-based income. As such, it would not need a full branch network; hence, the sale to Banco De Oro.

The Philippine losses are relatively small compared with the S$1.45 billion in net profit that UOB earned in 2004. Looking at the bigger picture, analysts say the deal will allow UOB to focus instead on other more profitable overseas markets. Analysts expect UOB to post a 2005 full-year net profit of S$1.7 billion, up some 17 percent from last year, as contributions from these purchases kick in.

[1] UOB (China), a wholly owned subsidiary of United Overseas Bank Limited (“UOB”), was incorporated in the People’s Republic of China on 18 December 2007 with a registered capital of RMB3 billion. UOB (China) officially commenced business on 2 January 2008. UOB’s association with China goes back more than 20 years, when it set up its first representative office in Beijing in 1984. To date, UOB (China)’s network comprises 10 branches and sub-branches in Beijing, Shanghai, Guangzhou, Shenzhen, Xiamen, Chengdu, Shenyang and Tianjin. UOB (China) offers a comprehensive range of foreign currency and RMB banking services to all customer segments. It has also obtained the retail RMB licence to offer RMB banking services to local individuals. Banking services include deposits, loans, project and trade financing, guarantees and bills discounting, and foreign currency exchange. For more information, visit uobchina.com.cn. However, unlike some of its competitors, it has not gained the right to issue debit cards in China and thus remains at a disadvantage.