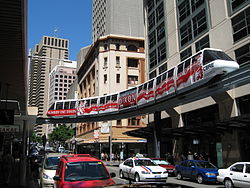 The Metro Monorail (formerly Sydney Monorail, and originally TNT Harbourlink) is a single-loop Von Roll MkIII monorail in the city of Sydney, Australia, that connects Darling Harbour, Chinatown and the Sydney central business and shopping districts. There are eight stations on 3.6 km of track, with four trains operating simultaneously. Major attractions and facilities such as the Powerhouse Museum, Sydney Aquarium and Sydney Convention and Exhibition Centre are served.

What was initially known as the Darling Harbour Monorail was first conceived in the mid 1980s as part of the redevelopment of 50 hectares of land at Darling Harbour, providing a passenger link with the Sydney CBD. The operators TNT Harbourlink (part of transport group TNT) hoped to have the monorail ready by the Australian Bicentenary celebrations of 26 January 1988, but the opening did not take place until 21 July 1988.[1] Nevertheless, the complete design and construction period of 26 months was an extraordinarily short one.[2] Test services commenced in May 1988.

The original operation hours were to be 6:00am to midnight, but after two years of operation patronage counts were half those expected, and planned stations at Market Street (to be named Casino, as part of the gaming venue planned to be built on the site) and Harbour Street (to be named Gardenside) were not built for some time.[1]

The monorail is now operated for Metro Transport Sydney by Veolia, who also operates the Sydney Metro Light Rail. 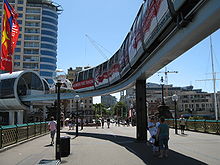 The track is a steel box girder of 940mm width, raised at a minimum height of 5.5 metres from ground level on steel columns 20 to 40 metres apart. The minimum curve radius is 20 metres and the maximum gradient is 4.4% uphill and 6.5% downhill.

Power is supplied at 500 V AC to power the train, via a sheathed conductor below the running plate of the track. A control rail is also provided for train control, and a generator is provided to clear trains from the track in emergencies. The train control and maintenance facility is located between Convention and Paddy's Market stations, where a traverser moves trains in and out of service.[1]

Each station stop takes 40 seconds, including the time to decelerate, board passengers, and accelerate again. A complete circuit of the route takes 12 minutes, and the total capacity of the system is 5000 passengers per hour. It was originally intended for the system to operate automatically, but after a number of breakdowns soon after opening, it was decided to retain drivers, who occupy the first car of each train.[1]

Delivered in 1987, the trains were built by Von Roll Habegger and are built to the "Type III" standard. There are six monorail trains, which each consist of seven carriages. Trains seat 48 passengers over six carriages, with the driver in the leading car, but were designed to seat 56, using all seven carriages.

The monorail trains run on rubber wheels, and each seven car train has six 37 kW traction motors, permitting a normal operating speed of 33 km/h. The doors of each car are automatic, and the floor level is self adjusting via an automatic suspension system. Each train is 32.12 metres long, 2.06 metres wide, and 2.6 metres high.[1]

Set 3 has been out of service for some time, possibly cannibalized for parts to keep the other five trains in service.

The Monorail above Market Street, Sydney

The monorail operates in a single loop with stops at the following stations (in order):

The six monorail units are maintained in a purpose-built facility located in Pyrmont Street, Pyrmont. A traverser is used to provide monorail trains with access to the standard track.

The facility also houses the Control Room (located above the maintenance area), as well as administration and staff amenities.

The decision to build the monorail over other forms of rail (e.g. light rail) was in the eyes of many a political decision. While a light rail would have been $20 million dollars cheaper to build, service more passengers per hour and cost 40% less for a ticket the monorail system prevailed.[11]

Recent studies[12] by a Sydney newspaper show that the Monorail is now one of the most expensive public transport systems in the world, with a $4.90 charge to travel a mere 150 metres between two stops in Pitt Street. When measured per kilometre, a journey on the monorail is more than a luxury cabin on the Orient Express from London to Venice.