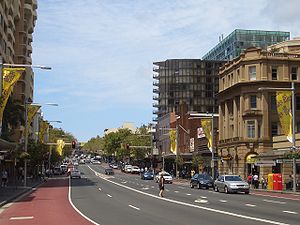 Oxford Street is a major thoroughfare in Sydney, Australia running from Whitlam Square on the south-east corner of Hyde Park in the central business district of Sydney to Bondi Junction in the Eastern Suburbs.[1] Close to the CBD in particular, the street is lined with numerous shops, bars and nightclubs. In recent years, Oxford Street has garnered a reputation as Sydney's primary nightclub strip, and has subsequently seen a large increase in the number of crimes committed in the area.

The western section, which runs through the suburb of Darlinghurst, is widely-recognised as Sydney's main gay district and Oxford Street is closed to traffic once a year in early March for the world famous Sydney Gay and Lesbian Mardi Gras. The section to the east of Taylor Square, running through the suburb of Paddington forms an upmarket shopping strip, noted for fashion, gifts and homewares, and represents the home of the new medical faculty of the University of Notre Dame Australia as well as the University of New South Wales' College of Fine Arts, Victoria Barracks, Paddington Bazaar and St Vincent's Hospital, Sydney amongst other locations.

In May 1909 the Sydney Council resolved to widen Oxford Street from 66 ft to 100 ft by resuming the entire north side of the street between Liverpool and Bourke Streets. The project was carried out in five stages between 1910 and 1914. The result was a new boulevard and the creation of a Federation streetscape which remains today largely intact.

Trams to Bondi and Bronte beaches travelled down Oxford Street until the line was closed in 1960, replaced by the current bus service. 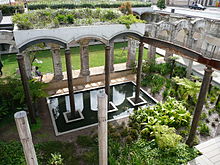 Located on the corner of Oatley Road and Oxford Street is the Paddington Reservoir, a water reservoir which provided water to the Botany Swamps pumping station for the provision of water to parts of Sydney between 1866 and 1899. In 2006 work began to restore and reuse the space of the then derelict Paddington Reservoir. The facility reopened in 2008 as a sunken garden known as the Paddington Reservoir Gardens or Walter Read Reserve, with a rooftop reserve located above the preserved eastern chamber. The facility integrates the remains of the original brick, timber and iron structure with modern elements of sculptural, structural and functional significance which provide access to the sunken garden via stairs and an elevator as well as ramped access to the rooftop reserve.

Victoria Barracks, located in Oxford Street, houses the Headquarters Land Command and Headquarters Training Command, as well as the Army Museum of NSW which is housed in the original District Military Prison, constructed in 1800. The barracks was constructed of Hawkesbury sandstone by way of convict labour between 1841 and 1846.

The Barracks were originally occupied by regiments of the British Army who vacated the sight in 1870 and was the premier military training site in Australia until 1901. For a brief period during the 1930s Victoria Barracks was home to the Royal Military College, Duntroon when the College was forced to close its buildings in Canberra and relocate to Sydney due to the economic downturn caused by the Great Depression.[2] 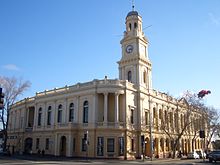 The following buildings are on the Register of the National Estate:[3]