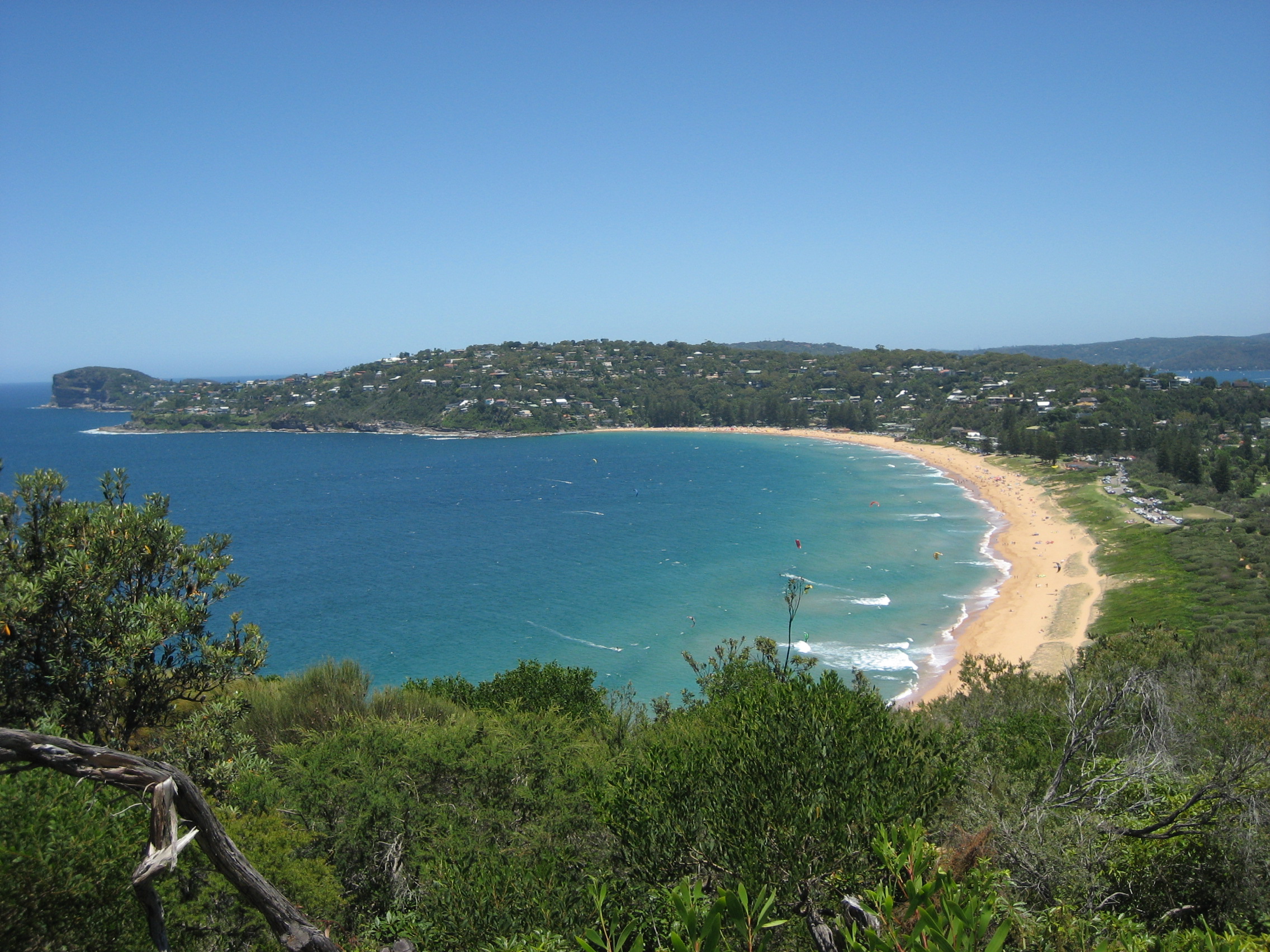 Palm Beach is used for exterior filming of soap opera , as the fictional town of .

Palm Beach is bounded by to the north, the (within the ) to the east, Whale Beach, Avalon and Clareville to the south, and to the west. Barrenjoey Headland, which is in the north of the , is part of . The headland at the northernmost point rises quite sharply from the beach to over 100 metres above sea level, and features an operational lighthouse. The narrow sand spit linking the south side of the headland to the rest of Palm beach had extensive fencing and shrub planting undertaken during the 1980s to combat sand erosion.

The southern end of the Palm Beach is marked as Cabbage Tree Boat Harbour on a map of 1832. Palm Beach was later named after the "livistona australis" that were near . The plant's species name gave origin to Livistona Lane, off Palm Beach Road.

and the , including Palm Beach, was the land of the and people, part of the group. These people lived in family groups and moved around the area. The coast provided an abundant food supply. Fish was the staple diet, including shellfish such as oysters, whelks, and mussels. Stranded whales were eaten, but not hunted directly. Men and women were highly skilled at fishing, both from the shore and from canoes using spears, lines with shell or bone hooks, and nets, with chewed shellfish or discarded fish for bait. Often a small fire was kept alight on a bed of seaweed in the canoe and the catch cooked on board. Other food sources were birds, reptiles, marsupials, as well as roots, fruits, berries, and nuts.

Initially Aborigines were hospitable towards an explorers, but misunderstanding and hostility developed. European settlement in 1788 brought disaster for the . Between April 1789 and 1790 many died of diseases, to which they had no immunity, such as and . Most of those who survived where moved away from the coast as Europeans colonised their territory competing for food and territory.

The Southern end of the ocean beach is marked as Cabbage Tree Boat Harbour on a of . Palm Beach was later named after the Cabbage Tree palms "livistona australis". Palm Beach, Barrenjoey and most of Whale Beach (400 s) was granted to James Napper in 1816. During the 19th century, a few Europeans and Chinese lived at Snapperman Beach catching and drying fish. [ "The Book of Sydney Suburbs", Compiled by Frances Pollen, Angus & Robertson Publishers, 1990, Published in Australia ISBN 0-207-14495-8, page 198]

In 1900 all land, except Barrenjoey Headland, which had been purchased by the government in 1881, was divided into 18 large blocks, listed as good grazing land, and offered for sale. None sold. In 1912, the land was offered again in smaller residential blocks, offering fishing, sailing, golf and rowing. Most houses were built from local sandstone, other materials were shipped in. Some were guest houses but most were second homes for those who could afford them.

Palm Beach wharf was the terminus reached by boat from Newport or Bayview. Horden and Wiltshire Parks and Mackay Reserve were donated by RJ Horden, who lived at Kalua, opposite the beach. Since the area has become more residential but still remains a secluded peninsula at the northern point of .

* Aboriginal inhabitants in area- Garigal clan of Guringai speaking people. Lands extended from Broken Bay to Port Jackson and to Lane Cove.
* 1770- Captain Cook names Broken bay.
* 1788-1789- area explored by Governor and Captain
* 1788- (1738 - 1814) 2 March 1788, named "Barrenjuee" (Little Kangaroo or Wallaby). Barrenjoey has had at least 9 different spellings.
* 1789- epidemic killed 50%-90% of local Aboriginal population.
* 1806- A sole ship wreck survivor is rescued by Aboriginals in Broken Bay.
* 1816 Land grant convert|400|acre|km2 to Surgeon James Napper RN by Governor Macquarie (1761 - 1824) - Headland to Whale Beach,8/- pa.
* 1804- Pat Flynn had a large garden below Observation Pt (facing Pittwater south of golf course) to supply passing ships.
* 1825- John Howard, an who arrived on the first fleet in 1788 lives at Barrenjoey in a cottage with two other fishermen.
* 1843- Customs Station set up under John B Howard. Near ranger's cottage. Constructed Smugglers Track. Smuggling of rum, brandy, tobacco. Today drugs & narcotics.
* 1840- Albert Black (1840-1890) becomes customs officer and adopted grandson of merchant famous in early Sydney.
* 1842- Four Convicts build a Customs House at Barrenjoey and build a track to the headland.
* 1855- A navigation light is established on the headland.
* 1863- A Chinese fishing settlement is established at Snappermans Beach.
* 1881- Government repurchased headland for £1250 from the Wentworth family.
* 1881- A stone lighthouse and three cottages are built according to the designs of Colonial Architect James Barnet.
* 1893- A school is established at Palm Beach.
* 1911- Palm Beach is subdivided and an extension to customs House is built.
* 1912- Telephone is connected to Palm Beach.
* 1916-1919 The oldest bungalows were built at Palm Beach during this period.
* 1976- burnt down.
* 1978- stars in the movie "Tim" filmed mostly at Barrenjoey Customs House (1911)
* 2004-2005- Construction of a Museum and a Public Toilet next to the lighthouse.

Facilities in Palm Beach, include a post office, a large RSL with a small cinema, a Police Station/Park Ranger Station, a Fire Station, a small clinic, a dental surgery, three schools and a number of cafes, restaurants and hotels.

operate services from Palm Beach to Rose Bay in Sydney's Eastern Suburbs, Cottage Point and Mooney Mooney. is located at the north end of Governor Phillip Drive and Golf Drive, just south of the headland.

The runs a service from a wharf in the town centre to Ettalong, Great Mackerel Beach, Currawong Beach, Coasters Retreat and The Basin.

Palm Beach features everything from cottages to grand estates, owned by some of the country's most affluent people. Many affluent and famous people can also be found holidaying at Palm Beach in summer.

Palm Beach has a number of parks, beaches, and sporting areas, including part of the , and the beach which gives the area its name. Careel Bay Ovals Sporting Complex includes facilities for rugby league, soccer and tennis.