The North Shore Line was opened on 1 January 1890 as a single track between Hornsby and St Leonards. The line was extended to the Sydney Harbour foreshore at Milsons Point on 1 May 1893. Transport between this original Milsons Point station and central Sydney was by ferry boat. Most of the North Shore line was duplicated between 1900 and 1909. In 1927 the line was converted to electric operation using a 1500 volt DC, overhead supply.

The construction works for the Sydney Harbour Bridge necessitated truncation of the southern terminus from Milsons Point to Lavender Bay. 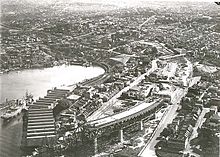 Aerial view of construction of the northern approach to the Sydney Harbour Bridge. The original railway alignment and construction work on the realignment for extension across the bridge can both be seen.

The North Shore Line is now a major commuter artery between the North Shore and central Sydney. In early years, Old Milsons Point, Bay Road, St Leonards, Chatswood, Lindfield, Gordon, Pymble, Turramurra, Wahroonga and Hornsby stations had goods yards. All but St Leonards, Chatswood and Hornsby yards had disappeared by mid-twentieth century, and the latter three did not survive into the late twentieth century.

The NSW Government Urban Transport Statement identifies capacity and service improvements for the North Shore Line with plans to add extra tracks between Gordon and Chatswood, and extra platforms at St Leonards by 2017.[1]

mean that a few trains on this pattern in peak hours may skip this station.

The current off-peak service pattern is as follows: (includes continuations onto Western Line)