Originally commissioned in 1815 as the stables for the proposed Government House of New South Wales, the oldest Conservatorium building was designed by the convict architect, Francis Greenway. A gothic structure with turrets, the building was described as a "palace for horses" and is a portrayal of the romantic vision of Governor Lachlan Macquarie and the British architectural trends of the time. The stables, located close to picturesque Sydney Harbour, reflect the building techniques and the range of materials and skills employed during the early settlement era.[citation needed] 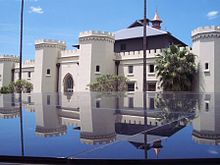 Origins of the Conservatorium

In 1915 the NSW Government under William Holman allocated £22,000 to the redevelopment of the stables into a music school. The NSW State Conservatorium of Music opened on 6 March 1916 under the directorship of the Belgian conductor and violinist Henri Verbrugghen, who was the only salaried staff member.[citation needed] The institution's stated aims of "providing tuition of a standard at least equal to that of the leading European Conservatoriums" and to "protect amateurs against the frequent waste of time and money arising from unsystematic tuition".[citation needed] The reference to European standards and the appointment of a European director was not uncontroversial at the time, but criticism soon subsided. By all accounts, Verbrugghen was hugely energetic: Joseph Post, later himself to be director, described him as "a regular dynamo, and the sort of man of whom you had to take notice the moment he entered the room".[citation needed] Enrolments in the first year were healthy with 320 "single-study" students and a small contingent of full-time students, the first diploma graduations occurring four years later. A specialist high school, the Conservatorium High School was established in 1918, establishing a model for music education across the secondary, tertiary, and community sectors which has survived to this day.[citation needed]

Verbrugghen's impact was incisive but briefer than had been hoped. When he put a request to the NSW Government that he be paid separate salaries for his artistic work as conductor of the orchestra (by then the NSW State Orchestra) and educational work as Director of the Conservatorium, the Government withdrew its subsidies for both the orchestra and the string quartet that Verbrugghen had installed. He resigned in 1921 after taking the Conservatorium Orchestra to Melbourne and to New Zealand.

The Conservatorium was home to Australia's first full-time orchestra, composed of both professional musicians and Conservatorium students. The orchestra remained Sydney's main orchestra for much of the 1920s, accompanying many artists brought to Australia by producer J. C. Williamson, including the legendary violinist Jascha Heifetz, who donated money to the Conservatorium library for orchestral parts. However, during the later part of the stewardship of Verbrugghen's successor, Dr W. Arundel Orchard (Director 1923–34), there were tensions with another emerging professional body, the "ABC Symphony Orchestra", later to become the Sydney Symphony Orchestra, driven by the young, ambitious and energetic Bernard Heinze, Director-General of Music for the Federal Government's new Australian Broadcasting Commission.

In 1935, under Edgar Bainton (Director 1934–48), the Conservatorium Opera School was founded, later performing works such as Giuseppe Verdi's Falstaff and Othello, Richard Wagner's Die Meistersinger von Nürnberg and Die Walküre, and Claude Debussy's Pelléas et Mélisande, among others. Under Sir Eugene Goossens (Director 1948–55), opera at the Conservatorium made a major contribution to what researcher Roger Covell has described as " the most seminal years in the history of locally produced opera...". Although the most prominent musician to have held the post of Director, Goossens' tenure was not without controversy. Apart from the international scandal surrounding his departure in 1956, Goossens was said during his directorship to have channelled the best players in the Conservatorium Orchestra into the Sydney Symphony Orchestra (of which he was concurrently Chief Conductor),[citation needed] leaving only a student group for the Conservatorium. He disbanded the choir and several chamber ensembles and, some claimed, tended to ignore administrative matters.[citation needed] Richard Bonynge, however, who graduated in 1950, felt that it was Goossens who turned the Conservatorium into a world-class institution, lifting standards and exposing students to sophisticated 20th-century scores (particularly those of Debussy and Ravel).[citation needed] 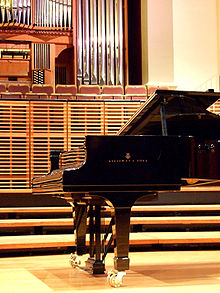 Verbrugghen Hall, named after the first director of the Conservatorium

Under the direction of Rex Hobcroft (1972–82), the Conservatorium adopted the modern educational profile recognised today. Hobcroft’s vision of a "Music University" was realised, in which specialised musical disciplines including both classical and jazz performance, music education, composition and musicology enriched each other.

In 1990, as part of the Dawkins Reforms, the Conservatorium amalgamated with the University of Sydney, and was renamed the Sydney Conservatorium of Music.

As in 1916, a wide range of sites were considered, many of them controversial. In May 1997, 180 years after Governor Macquarie laid the foundation stone for the Greenway Building, State Premier Bob Carr announced a major upgrade of the Conservatorium, with the ultimate goal of creating a music education facility equal to or better than anything in the world. A team was assembled to work to that brief, resulting in a complex collaboration between various government departments (notably the Department of Education and Training and the Department of Public Works and Services), the Government Architect, US-based acoustic consultants Kirkegaard Associates, Daryl Jackson Robin Dyke Architects, the key users represented by the Principal and Dean of the Sydney Conservatorium of Music, and the Principal of the Conservatorium High School, the Royal Botanic Gardens and Domain Trust and many others.

The building process saw the temporary relocation of the Conservatorium’s performance activities, and the Conservatorium High School to the Australian Technology Park from 1998–2001. With the Conservatorium's Composition, Music Education and Musicology Units housed in an office building in Pitt Street, the challenges (which had existed since the 1970s) of a split campus connected only by a railway line from Redfern to Wynyard became acute.

By the time of the relocation, the historic Greenway building, Governor Macquarie's stables, had housed music students for longer than it had housed horses. Nevertheless heritage was a sensitive issue. The redevelopment has restored Greenway's historic castellated building, removing newer additions to discreetly complement, enhance and enlarge the public green space of the Royal Botanic Gardens. For the city of Sydney it makes a major step towards the completion of the vision first enunciated by the then Conservatorium Director Eugene Goossens in 1947 when he lobbied Joe Cahill (Minister for Local Government, later Premier) for an Opera House on Bennelong Point to create a music precinct in the lower end of Macquarie Street. For the Conservatorium, it provides facilities of outstanding acoustic and architectural quality in which to serve the music and wider communities, and to educate future generations of performers, musicologists, composers and music educators.

To mark the centenary of the Conservatorium in 2015, it is commissioning 101 new works, the spread designed to represent those who have shaped music over the past 100 years. The first work in the series was John Corigliano's Mr Tambourine Man, based on the poetry of Bob Dylan, which was presented on 11 September 2009.[1]

Heads of the Conservatorium 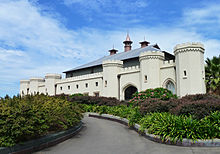 Professor Kim Walker has been Dean of the Sydney Conservatorium since 2004. The past directors, principals and deans were:[2]