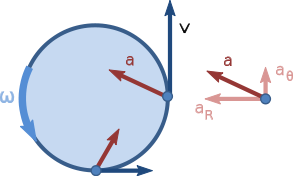 Non-uniform circular motion is any case in which an object moving in a circular path has a varying speed. Some examples of non-uniform circular motion include a roller coaster, a vertical pendulum, and a car riding over a hill. All of these situations include an object traveling at different speeds in a circular path. For the roller coaster, its cars travel faster during its trip down than its trip up. The pendulum’s mass swings in a semicircle in which its trip up slows down to 0 m/s and comes back down. A car riding over a hill will experience different speeds at different points of the hill.

towards the center of the circle. In non-uniform circular motion, the radial acceleration is the same and equal to

towards the center of the circle. What is different is the tangential acceleration, since speed is non-zero and changing.

Since there is a non-zero tangential acceleration, there are forces that act on an object in addition to its centripetal force (composed of the mass and radial acceleration). These forces on the object include forces such as weight, normal force, and other forces acted on the object due to the environment it is in such as friction.

An interesting characteristic of the additional forces that non-uniform circular motion takes into account is that they do not always follow traditional force concepts. For example, in many situations weight is countered by its normal force. When weight points down, normal force points up. In non-uniform circular motion, normal force does not always point in the opposite direction of weight. Here is an example with an object traveling in a straight path then loops a loop back into a straight path again. 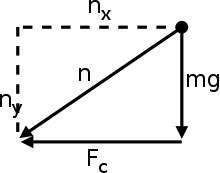 The reason why the object does not fall down when subjected to only downward forces is a simple one. Think about what keeps an object up after it is thrown. Once an object is thrown into the air, there is only the downward force of earth’s gravity that acts on the object. That does not mean that once an object is thrown in the air, it will fall instantly. What keeps that object up in the air is its velocity. The first of Newton's laws of motion states that an object’s inertia keeps it in motion, and since the object in the air has a velocity, it will tend to keep moving in that direction.

, we can draw free body diagrams to list all the forces acting on an object then set it equal to

. Afterwards, we can solve for what ever is unknown (this can be mass, velocity, radius of curvature, coefficient of friction, normal force, etc.). For example, the visual above showing an object at the top of a semicircle would be expressed as

Radial acceleration is always equal to

. The tangential acceleration is simply the derivative of the velocity at the given point.