In mechanics, the normal force

(occasionally N) is the component, perpendicular to the surface of contact, of the contact force exerted on an object by, for example, the surface of a floor or wall, preventing the object from penetrating the surface. 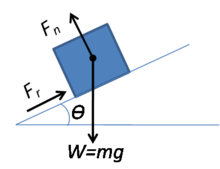 where N is the normal force, m is the mass of the object, g is the gravitational field strength, and θ is the angle of the inclined surface measured from the horizontal.

The normal force is one of several forces which act on the object. In the simple situations so far considered, the most important other forces acting on it are friction and the force of gravity.

Or, in indicial notation,

The static coefficient of friction for an object on an inclined plane can be calculated as follows:[1]

When we define upward to be the positive direction, constructing Newton's second law and solving for the normal force on a passenger yields the following equation:

In Lagrangian Mechanics, the normal force plays an important part in its formalization. Suppose a smooth surface,Σ , is defined by the explicit equation f(x,y,z) = 0. Furthermore, suppose a particle must move along this surface. The equation of motion would be given by

is the acceleration of the particle,