In mechanics, a couple is a system of forces with a resultant (a.k.a. net, or sum) moment but no resultant force.[1] Another term for a couple is a pure moment. Its effect is to create rotation without translation, or more generally without any acceleration of the centre of mass.

The resultant moment of a couple is called a torque. This is not to be confused with the term torque as it is used in physics, where it is merely a synonym of moment.[2] Instead, torque is a special case of moment. Torque has special properties that moment does not have, in particular the property of being independent of reference point, as described below.

The simplest kind of couple consists of two equal and opposite forces whose lines of action do not coincide. This is called a "simple couple".[1] The forces have a turning effect or moment called a torque about an axis which is normal to the plane of the forces. The SI unit for the torque of the couple is newton metre.

If the two forces are F and −F, then the magnitude of the torque is given by the following formula:

τ is the torque
F is the magnitude of one of the forces
d is the perpendicular distance between the forces, sometimes called the arm of the couple

, which is perpendicular to the plane containing the two forces. When d is taken as a vector between the points of action of the forces, then the couple is the cross product of d and F.

The moment of a force is only defined with respect to a certain point P (it is said to be the "moment about P"), and in general when P is changed, the moment changes. However, the moment (torque) of a couple is independent of the reference point P: Any point will give the same moment.[1] In other words, a torque vector, unlike any other moment vector, is a "free vector".

The proof of this claim is as follows: Suppose there are a set of force vectors F1, F2, etc. that form a couple, with position vectors (about some origin P) r1, r2, etc., respectively. The moment about P is

Now we pick a new reference point P' that differs from P by the vector r. The new moment is

Now the distributive property of the cross product implies

However, the definition of a force couple means that

This proves that the moment is independent of reference point, which is proof that a couple is a free vector. 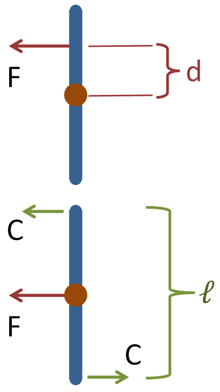 Any couple can be replaced by another in the same plane of the same direction and moment, having any desired force or any desired arm.[4]

Couples are very important in mechanical engineering and the physical sciences. A few examples are:

In a liquid crystal it is the rotation of an optic axis called the director that produces the functionality of these compounds. As Jerald Ericksen explained

At first glance, it may seem that it is optics or electronics which is involved, rather than mechanics. Actually, the changes in optical behavior, etc. are associated with changes in orientation. In turn, these are produced by couples. Very roughly, it is similar to bending a wire, by applying couples.[5]