Cleveland Hopkins International Airport (IATA: CLE, ICAO: KCLE, FAA LID: CLE) is a public airport located nine miles (14 km) southwest of the central business district of Cleveland, a city in Cuyahoga County, Ohio, United States.[1] The airport lies just within the city limits of Cleveland. It is the largest airport in the state of Ohio and as of 2009 is the 39th largest airport in North America.[3]

The airport was founded in 1925, making it the first municipally owned airport in the United States.[4] The airport has been the site of many other airport firsts: the first air traffic control tower, ground to air radio control and the first airfield lighting system, all in 1930, and the first U.S. airport to be directly connected to a local or regional rail transit system, in 1968. The airport was named after its founder, former city manager William R. Hopkins, on his 82nd birthday in 1951.

The airport handled 9,492,455 passengers in 2010, representing a 2.3% decrease compared to 2009;[2] the passenger decline at Hopkins was 5th steepest among the 50 largest airports in the USA in 2009.[5] There were 192,863 operations (takeoffs and landings) in 2010.[2] The airport handles more than 325 daily nonstop flights to over 85 destinations. It is the third largest hub for Continental Airlines and its regional carriers ExpressJet, Chautauqua, Colgan Air, CommutAir, and Gulfstream International Airlines. Following Continental's merger with United Airlines, the airport will become the smallest of the combined airline's eight mainland U.S. hubs in terms of passenger boardings (though busier than Guam).[6] Cleveland Hopkins International Airport, along with Cleveland Burke Lakefront Airport comprise the Cleveland Airport System operated by the city of Cleveland's Department of Port Control.

In 2006, Cleveland Hopkins International Airport unveiled a new marketing and branding campaign. The slogan, "CLE Going Places", is said to depict the airport's pursuit of improving passengers' experience as they upgrade the airport facility and negotiate additional air services.[citation needed] Improvements include upgrades to the restaurant and store concessions program, taxi service, on-site parking, customer service areas, and the attraction of additional flights to new destinations with the airport's new air service development program (begun in 2007). 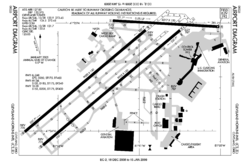 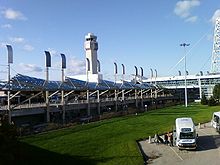 An outside view of the terminal

Satellite view of the airport

The older parallel runway, formerly Runway 6C/24C, was 7,096 x 150 ft. (2163 x 46 m). It has been decommissioned as an active runway, its width narrowed, and is now designated as Taxiway C. The centerfield taxiway C has the word "TAXI" inscribed in large yellow letters on either end to ensure approaching aircraft do not mistakenly use it as a runway.

Currently underway is a project to move both thresholds of Runway 10/28 330 feet to the east, thus allowing for the addition of EMAS (Engineered Materials Arresting System) at both ends. As part of this project, some turnouts will be rebuilt, also. 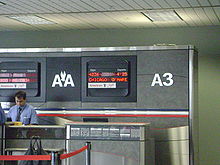 An American Eagle counter at gate A3 in concourse A 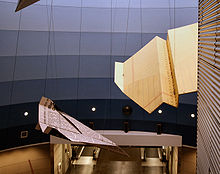 Hopkins airport is known for its fanciful giant "paper" airplane sculptures located in the underground walkway between Concourses C and D.

Cleveland Airport consists of one passenger terminal which is divided into four concourses: 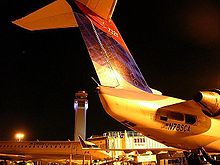 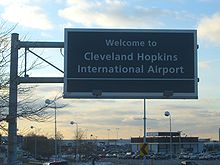 In 1998, Hopkins moved rental car operations off the airport grounds to a new consolidated rental car facility. The facility has drawn mixed reviews from travelers because of its distance from the airport, inconsistent bus service and long bus rides, only partial canopy coverage for vehicles, and fees and taxes that are very high relative to those of other airports; the charges cover costs of not only operating the center but also supporting other local projects, such as the Cleveland Browns stadium.[22]

Relationship with Continental Airlines and the Post-Merger United Airlines

Continental Airlines, the largest tenant at Cleveland Hopkins, handles roughly 60% of all passenger traffic through the airport. Continental and Hopkins have both made substantial investments in support of Continental's presence at the airport, including the 1999 construction of Concourse D, primarily to accommodate Continental Express flights. However, Cleveland clearly has remained the airline's third-tier hub behind George Bush Intercontinental Airport and Newark Liberty International Airport.[24]

The airport, Cleveland community, and Continental have had something of an uneasy relationship for several years. In 2003, Continental CEO Gordon Bethune publicly scolded the Cleveland business community and encouraged business flyers to support Hopkins rather than to take cheaper fights from neighboring Akron-Canton Airport, which advertises itself as the "preferred alternative" to Hopkins and "a better way to go,"[25] and which is undertaking an ambitious expansion in response to substantial increases in enplanements while Hopkins boardings have declined.[24][26] Shortly thereafter, Continental reduced the size of its board of directors by halving the number of representatives from the Cleveland area, began to closely scrutinize local passenger traffic volume, and closed its four off-airport ticket offices in the Greater Cleveland area (while maintaining offices near its Houston and Newark hubs).[27][28] In March 2009, Continental CEO Larry Kellner omitted Cleveland but referenced Newark and Houston when commenting on the carrier's strengths: "We are strong in the Atlantic, we are strong in Latin America, we are strong in New York, we're strong in Houston."[29]

Unlike Continental's other hubs (EWR, IAH, GUM) or those of merger partner United Airlines (ORD, LAX, SFO, IAD, DEN, NRT), Continental's Cleveland operation has only a handful of flights to any international cities (in Mexico and Canada), has not been able to sustain year-round service from the airport to Europe or other trans-oceanic destinations, handles an overwhelming majority (81% as of May 2011[update]) of its traffic via Continental Express regional jet or propeller-driven/turboprop aircraft rather than mainline jets (e.g., in Continental's case, its Boeing jets), and does not serve the airport with any twin-aisle, wide-body aircraft (e.g., in the case of Continental, its Boeing 767 or Boeing 777 planes).[24][30]

On September 14, 2007, Continental announced what was at the time called a "major expansion" at Hopkins that would have increased the hub's capacity by some 40% over a two-year period. The expansion would have entailed some 20 new destinations served primarily on regional aircraft, followed later by a dozen new destinations served on mainline aircraft. This expansion was to have created 700 jobs, and the state of Ohio offered a $16 million incentive package to help make the service increase happen.[31] However, when record-high fuel prices forced Continental to cut capacity in the summer of 2008, the airline reduced its workforce, eliminated service between Cleveland and 24 cities (including 12 cities that were part of Phase I of its hub expansion program), and reduced the frequency of its flights to a number of others; the service cuts in Cleveland were deeper as a percentage of overall flight volume than concurrent cuts at Continental's Houston and Newark hubs.[32] In March 2009, Continental indicated that it would continue to make capacity cuts in response to reduced demand for seats.[33] Continental passenger boardings in Cleveland have declined 22% since the year 2000.[34]

On July 10, 2009, the US Department of Transportation approved Continental's membership in Star Alliance (it had been a member of SkyTeam with Northwest Airlines and Delta Air Lines) and most aspects of the code-share agreement it had requested with United and other Star Alliance members (e.g. Lufthansa).[35] Then, on October 1, 2010, United and Continental officially completed the legal aspects of a full merger.[36] The merger only heightened ongoing concerns within the greater Cleveland area about the potential effect on Cleveland air service; Continental's previous merger talks with Star Alliance founding partner United were viewed in some circles as a serious threat to Continental's future at Hopkins.[37][38] When the 2010 United/Continental tie-up was initially announced, it prompted Cleveland politicians to propose hearings to investigate the potential impact of the marriage on the community; these investigations ultimately had no effect on the companies' efforts to combine.

There are ongoing concerns that a post-merger United will reduce or eliminate direct service from Cleveland to a number of cities and instead route passengers through United's hubs in Chicago (315 miles west by air) and Washington (287 air miles east by air).[39][40] The new company, United Continental Holdings, Inc., signed a letter of agreement with Cleveland officials stipulating what service levels will be maintained at Hopkins for five years, but it has been criticized as weak, vague, and having loopholes that the airline can exploit if it chooses to reduce service before the agreement expires. For example, the agreement dictates a certain number of flights but does not stipulate the type of aircraft used to operate them, which would allow the company potentially to substitute mainline Boeing jets with propeller-driven aircraft such as the Saab 340 (with 34 seats) or the Beechcraft 1900 (with 19 seats).[41] Moreover, the agreement hinges largely on United's profitability on routes to and from Cleveland, which might be subject to variation depending on how United assigns costs. Finally, the potential $20 million penalty for violating the agreement is a relatively minor amount for a company the size of United Continental Holdings, with 2010 revenue of $29 billion.[42] Terms of the agreement are as follows:

During the remainder of the five year agreement (i.e. until October 1, 2015):

These and other factors, such as the cost of operations at Hopkins, have led to speculation in news reports that the airport's hub status might eventually be further diminished or lost altogether, as has been the case with each of the metropolitan airports closest to Cleveland (with the exception of Detroit):

The Wall Street Journal noted the declines on September 28, 2011, stating, "Cities such as Cleveland, Pittsburgh and St. Louis are dealing with a deep retrenchment in flights, as airlines have cut costs in the wake of consolidation. Since 2005, the number of flights from Cleveland's Hopkins International airport are off 23%; Pittsburgh's are down 49% and St. Louis's are 36% lower."[43]

If Continental de-hubbed in Cleveland, it would not be the airline's first experience radically scaling back in a hub city; Continental abandoned its hub at Stapleton International Airport in Denver when Denver International Airport was built. It would also not be the first time that Cleveland lost an airline hub; ironically, United maintained a substantial hub at Hopkins before relocating it to Washington Dulles International Airport in the late 1980s as Cleveland's prominence as a business center began a more precipitous decline. Should the new United elect to close its Cleveland hub, Cleveland would have the dubious distinction of being the only U.S. airport to be "de-hubbed" twice by the same airline.

In an article about the Continental-United merger, the Wall Street Journal reported on May 3, 2010, that "One city that could feel the pinch from the latest consolidation is Cleveland, a small Continental hub. Analysts say that a combined United-Continental could shift more connecting traffic to Chicago, United's largest hub. Delta has continued to scale back flights at its small Cincinnati hub since it acquired Northwest, which had hubs in nearby Memphis and Detroit." [44]

Continental CEO Jeff Smisek stated in a speech in Cleveland on November 10, 2010 that "Cleveland needs to earn its hub status every day" and added that overall profitability would be the determining factor in whether the new United kept or shuttered the Cleveland operation.[45]