Punta Cana International Airport (IATA: PUJ, ICAO: MDPC) is a privately owned commercial airport in Punta Cana, eastern Dominican Republic. The airport is built in a traditional Dominican style with open-air terminals with their roofs covered in palm fronds. Grupo PuntaCana built the Punta Cana International Airport in 1984. A number of scheduled and charter airlines fly to Punta Cana. In 2009, 3,811,946 passengers passed through Punta Cana, making it the busiest airport in the country.[1] The operators of the airport, Grupo Punta Cana, are planning to expand the airport, by adding a new Control Tower, a new terminal with more gates, as well as another runway.

The airport has three terminals: Terminal 1 is used for international flights, whilst Terminal 3 is used for domestic flights and private jets. In February 2009, the new Terminal 2 was opened. Punta Cana International Airport currently serves as a destination for 53 different airlines. 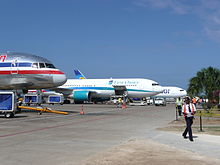 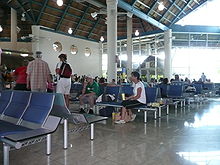 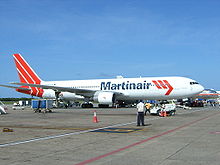 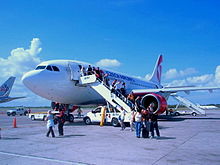 Punta Cana's airport is the leading point of entry in number of arriving passengers in the Dominican Republic. It is also the fastest growing airport with almost a 20% increase in traffic yearly, which indicates that in less than 5 years the aircraft movements will double. At the moment the airport counts on two international terminals, one VIP, domestics and an FBO, a main incline with 12 positions.

The Punta Cana's Airport operators have planned an ambitious airport expansion project. The project consists of a new larger runway, expansion of the existing taxiway, construction of a new taxiway, a new control tower, the installation of the ILS, new frequencies of radio and the expansion of the Terminals 1 and 2. It also includes the construction of a New Terminal 3, that will be located between the two runways. As Of Right now the expansion of the old taxi ways is complete, as well as the construction of the new taxiways and new runway 08/26. The New control tower is complete and workers have already began to clear the trees out between the two runways in order to make room for the new terminal, scheduled to be complete in September 2013.

Plans were underway for a U.S. immigration and customs preclearance station to be opened at the airport by the end of summer 2009, however, as of June 2011 the facility has not opened yet.[5]