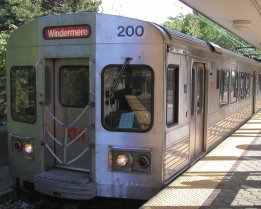 image_width = 250px
caption = GCRTA Red Line
type =
system =
status =
locale = Cleveland, Cuyahoga County,
start = Cleveland Hopkins International Airport
end =
stations = 18 Total: The Red Line (Route 66X) is a line of the in , running from northeast to Tower City in , then east and northeast to Windermere. 2.6 miles (4.2 km) of track, including two stations (East 34th-Campus and East 55th), are shared with the Blue and Green Lines; the stations have high platforms for the Red Line and low platforms for the Blue and Green Lines. The whole Red Line is built next to current or former freight or intercity passenger railroads. It uses and pantographs to draw power.

The corridor along which the Red Line runs had been planned for use since before 1930, when the opened. The first short section, between East 34th and East 55th Streets, was in use by the in 1920, and in 1930 the line between East 34th and the Union Terminal was completed. It was not until , that the eastern half of the Red Line opened, from the existing line near East 55th northeast next to the (Nickel Plate Road) to Windermere. The line from downtown southwest to West 117th Street opened ; this line ran next to the Nickel Plate to the crossing of the near West 101st Street, and then next to the New York Central. On , , an extension to West Park opened, and the final section, continuing to Cleveland Hopkins International Airport, opened in 1968, the first in North America.

The Red Line runs from approximately 4:00 a.m. to 1:00 a.m. daily. Trains run about every 15 minutes during most times, with extra service provided between Brookpark and Tower City during rush hours. [ [http://riderta.com/schedules/rt66wk.html Route 66X Weekday: Red Line] . Schedule from "RTA Website". Retrieved 2007-06-13.] (Service to Cleveland Hopkins International Airport is provided by # 22 buses between 1:00 a.m. and 4:00 a.m.)

Effective , , the one-way cash fare on the RTA Rapid Transit is $1.75. A five-trip fare card can be purchased for $8.75. An All-Day pass, allowing unlimited riding on the rapid transit as well as on RTA buses is $4.00 ($1.75 for children). Weekly and monthly passes are also available, and there are discounted fares for seniors and disabled.

Only major stations have a secure turnstile system. In most stations, a station agent booth is located either in a station house or on the platform. In this booth is a bus-like farebox in which passengers pay their fares. While the passenger flow is often light enough to have a secure system, in a busy station some passengers may choose to bypass the step. In that case, the system doesn't have a proof of payment system, in which random checks are performed to make sure everyone paid their fares.

The Red Line uses a fleet of 60 stainless-steel subway-type cars manufactured by and delivered to RTA between 1984 and September 1985.

, the current fleet of Red Line cars is undergoing a in-house rehabilitation under the direction of former director of rail Michael Couse. The fleet will be pared down from 60 to 40 cars, with the remaining 20 being scrapped.Fact|date=May 2008 The cars will be overhauled over the course of 3-5 years using federal grant money. Cars will receive new pantographs and controllers, along with rebuilt trucks, traction motors, resistor banks, and air conditioning systems. Fewer than 30 of the 60 cars are in running condition.Fact|date=May 2008

The current cars represent the third generation of cars that have been used on the line. The line opened using a fleet of shorter cars manufactured by the in 1954 and 1955. The cars were 48½ feet (14.8 m) long with blue and gray exteriors and are often referred to as "Blue Birds." They were virtually identical to the cars built by St. Louis Car at the same time for 's Blue Line. Twelve cars were operable as single units with cabs at each end, and 56 cars operable as pairs. The single units were numbered as 101–112, and the paired units as 201–256. Additional cars in this fleet were purchased in 1958 when the line was extended to West Park. These comprised six additional single unit cars (numbers 113–118) and 14 additional double unit cars (numbers 257–270).

When the extension to Hopkins Airport was being built in 1967, a fleet of 20 longer cars was purchased to supplement and replace the Blue Birds. These second generation cars, numbered as 151–170, were 72 feet (22 m) long and were built by Pullman-Standard Car Manufacturing Company. The cars, which had a stainless steel exterior with red and white trim and featured interior luggage racks, were promoted as "Airporters." The Airporters supplanted the Blue Birds, except during rush hour when extra cars were needed. In 1970, ten additional Airporters were purchased, numbered as 171–180. With the purchase of the Tokyu cars in 1985, all Airporters and Blue Birds were retired.

The Red Line is prominently featured in the final scenes of the film "Proximity", starring and . The finale involves a hostage on a Red Line train and a gunfight and chase scene through the Tower City station.

The Red Line makes the following station stops from west to east (stations are listed along with indications of their accessibility, availability of free parking, travel time to Tower City, and opening date for Red Line service):