United Continental Holdings, Inc. (NYSE: UAL), is a publicly traded airline holding company, incorporated in Delaware with headquarters in the United Building in Chicago, Illinois.[3] UCH owns and operates United Airlines, Inc. and Continental Airlines, Inc. both of which use the trade name United Airlines. The company is the successor of UAL Corporation, which agreed to change its name to United Continental Holdings in May 2010, when a merger agreement was reached between the airlines. Its stock trades under the UAL symbol. To effect the merger, Continental shareholders received 1.05 shares of UAL stock for each Continental share; at the time of closing, it was estimated that United shareholders owned 55% of the merged entity and Continental shareholders owned 45%.[4] The company or its subsidiary airlines also have several other subsidiaries. United, when it is completely combined, will be the world's largest airline, as measured by revenue passenger miles. United is a founding member of the Star Alliance.[5]

UCH plans to use Continental's operating certificate and United's repair station certificate. UCH plans to dissolve its Continental Airlines, Inc. subsidiary by the end of 2011 and operate under a single brand name United Air Lines, Inc. 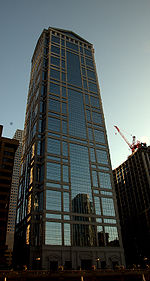 Early in February 2008, UAL Corporation and Continental Airlines began advanced stages of merger negotiations and were expected to announce their decision in the immediate aftermath of a definitive merger agreement between rival Delta Air Lines and Northwest Airlines.[6] The timing of the events was notable because Northwest's golden shares in Continental (that gave Northwest veto authority against any merger involving Continental) could be redeemed, freeing Continental to pursue a marriage with United. On April 27, 2008, Continental broke off merger negotiations with United and stated it was going to stand alone.[7] Despite ending merger talks, Continental announced that it will join United in the Star Alliance.[8]

United and US Airways were in advanced merger talks in late April 2008, following the announcement that Continental had broken off talks with United.[9] In June 2008, CEOs of both United Airlines and Continental Airlines signed an alliance pact presaging their eventual merger. The alliance is an agreement to link international networks and share technology and passenger perks. This agreement is basically a "virtual merger" that includes many of the benefits of a merger without the actual costs and restructuring involved. The alliance took effect about a year after Delta Air Lines and Northwest Airlines completed their merger, as that released Continental from the SkyTeam contract and allowed for the required nine-month notice. Additionally, Continental joined the Star Alliance, as Delta and Northwest merged.[10]

United Airlines was reported to be in serious merger discussion with US Airways in early April 2010. A New York Times report indicated that a deal was close. Union consent was cited as a major hurdle for negotiators to clear.[11] On April 22, 2010, United announced that it would not pursue a merger with US Airways.[12]

The Board of Directors at Continental and United airlines approved a stock-swap deal that would combine them into the world's largest airline on Sunday, May 2, 2010. The airlines publicly announced the deal the next day.[13] The new airline will take on the United Airlines name and be based in United's hometown of Chicago. It will be run by Continental's CEO, Jeff Smisek. UAL's CEO, Glenn Tilton, will be non-executive chairman. The deal will still need final approval from labor unions and antitrust regulators before being allowed to go forward.[14] This would re-unite Walter Varney's airlines, which offspring includes Continental and United.[15]

Both airlines have taken losses in the recession and expect the merger to generate savings of more than $1 billion a year.[16] Combined, they fly to some 370 destinations in 59 countries from their ten hubs,[17] and carry 144 million passengers a year.[16] Combined revenues will be about $29 billion.[18]

In July, the merger of the two airlines was approved by the European Union.[19]

On August 27, 2010, the U.S. Department of Justice approved the $3 billion merger[20] and shareholders of both the companies approved the merger on September 17, 2010.[21][22] On October 1, 2010, UAL Corporation (the parent company of United Airlines) completed its acquisition of Continental Airlines and changed its name to United Continental Holdings, Inc. Although the two airlines remain separate until the operational integration is completed (by mid-2012), as of this day both airlines are corporately controlled by the same leadership.

When United Airlines and Continental Airlines announced their merger in May 2010 they introduced their new corporate branding. It featured the words "United Airlines" in the then-current Continental typeface, and Continental's globe-like logo. United updated their branding once again in August 2010, replacing the words "United Airlines" with the single word UNITED and changing the font to United's traditional upper-case sans-serif font.[23] United's new CEO Jeff Smisek, who previously served as Continental's chairman, helped design the new font, integrating it with the existing Lippincott-designed Continental graphics. He has noted that he has received over 15,000 emails with suggestions for a new livery.[24]

A Continental Airlines Boeing 737-900ER series aircraft (N53442) was the first aircraft to be painted into the new livery for the combined company.

As of late 2010, George Gershwin's 1924 "Rhapsody in Blue" will remain as the new United's theme song, the song has since been featured on new safety videos on United and Continental aircraft.

It was announced February 2011 that United aircraft will retain the United P.S.

The first United 747 featuring the new livery was painted in February 2011. Re-painting and branding is said to be "accelerated" beginning mid-2011.[25] 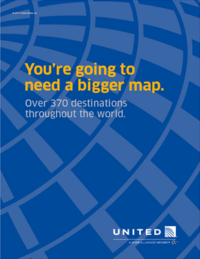 On March 1, 2011, United unveiled an "interim" marketing campaign replacing the previous "It's Time to Fly" campaign, which included fingerpaint ads and television spots created by Fallon. On the same date, United removed the iconic 38-year-old Saul Bass-designed "Tulip" logo from its website and all new advertisements will feature the former Continental globe logo. This new campaign will be used until 2012.[26] The newly released ads adopt the same concept of the former Continental ads which simply express a one-liner. As of now, United has no tagline, but will have a new one in 2012.[citation needed]

The combined airline serves up to 370 destinations, from the 10 hubs listed below. This may be subject to change due to future developments and decisions. Continental and United said that Houston's George Bush Intercontinental Airport will be the largest hub for the new airline, which is a primary gateway to Latin America.[27] The Chicago-O'Hare, Houston-Bush, and San Francisco hubs have completely rebranded. Hubs at Denver, Cleveland, Newark, Tokyo-Narita, and Washington-Dulles are currently being rebranded in phases. Guam is the only hub airport that have not rebranded.[28]

The new United will be the world's second largest airline in terms of fleet size, while Delta remains the largest. The combined airline houses a fleet of 709 aircraft, surpassing American Airlines' 621. There are also 116 aircraft on order, 50 from United, and 66 from Continental. The combined fleet features a mixture of Airbus and Boeing aircraft: Airbus A319s, Airbus A320s, Boeing 737s, Boeing 747s, Boeing 757s, Boeing 767s, and Boeing 777s with orders of Airbus A350s and Boeing 787 Dreamliners.[29]