Schematic diagram of an avulsion fracture

An avulsion fracture is a bone fracture which occurs when a fragment of bone tears away from the main mass of bone as a result of physical trauma. This can occur at the ligament due to the application forces external to the body (such as a fall or pull) or at the tendon due to a muscular contraction that is stronger than the forces holding the bone together. Generally muscular avulsion is prevented due to the neurological limitations placed on muscle contractions. Highly trained athletes can overcome this neurological inhibition of strength and produce a much greater force output capable of breaking or avulsing a bone.

If the fracture is small, it is usually sufficient to treat with rest and support bandage, but in more severe cases surgery may be required. Ice may be used to relieve swelling.[1]

For displaced avulsion fractures, they are best managed by either open reduction and internal fixation or closed reduction and pinning.[2]

Traumatic complete displacement of a tooth from its socket in alveolar bone. It is a serious dental emergency in which prompt management (within 20–40 minutes of injury) affects the prognosis of the tooth.[3] 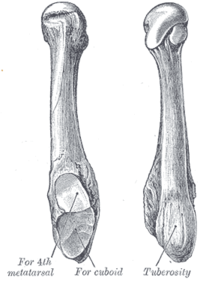 The tuberosity avulsion fracture (also known as pseduo-Jones fracture or dancer's fracture[4] is a common fracture of the fifth metatarsal (little toe).[5] This fracture is likely caused by the lateral band of the plantar aponeurosis (tendon).[6] Most of these fractures are treated with a hard-soled shoe or walking cast. This is needed until the pain goes away and then the patient can return to normal activities.[5] Healing is usually completed within eight weeks.[7]

A 2001 study found evidence of a tendon avulsion on the arm of Sue the T. rex.

In 2001, Bruce Rothschild and other paleontologists published a study examining evidence for tendon avulsions in theropod dinosaurs. Among the dinosaurs studied, Avulsion injuries were only noted among Tyrannosaurus and Allosaurus. Scars from these sorts of injuries were limited to the humerus and scapula. A divot on the humerus of Sue the T. rex was one such avulsion. The divot appears to be located at the origin of the deltoid or teres major muscles. The localization in theropod scapulae as evidenced by the tendon avulsion in Sue suggests that theropods may have had a musculature more complex and functionally different than those of their descendants, the birds.[8]