Mayo Clinic is a not-for-profit medical practice and medical research group specializing in treating difficult patients (tertiary care). Patients are referred to Mayo Clinic from across the U.S. and the world, and it is known for innovative and effective treatments. Mayo Clinic is known for being at the top of most accredited quality standard listings. For example, it has been near the top of the US News and World Report List of Best Hospitals for more than 20 years.[1] The practice is distinguished by integrated care, and a strong research presence is evidenced by the fact that over 40% of its resources are devoted towards research (rather than just medical practice).

Mayo Clinic has been on the list of America's "100 Best Companies to Work For" published by Fortune magazine for eight years in a row.[2][3] From its humble beginnings as a family venture between a father and his two sons, the practice later became America's first integrated group practice, a model that is now standard in the United States. The current-day Mayo Clinic is an integrated practice of more than 3,700 physicians and scientists, and a total employment including nurses, students, and allied health staff of more than 56,000 persons.[4] 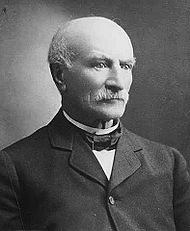 William Worrall Mayo, the founding father of what would become the Mayo Clinic.

In 1863, William Worrall Mayo (1819–1911) came to Rochester, Minnesota as part of his appointment as an examining surgeon for the military draft board during the Civil War. The city would be to his liking, and his wife and children would join him in early 1864. W.W. Mayo opened his medical practice after the war, and would also serve in several leadership roles in the community. Both of W.W. Mayo's sons, William James Mayo (1861–1939) and Charles Horace Mayo (1865–1939) would grow up in Rochester, and when old enough both attended medical school. William (Will) graduated in 1883 and joined his father's practice, with Charles (Charlie) joining after he completed his training in 1888. 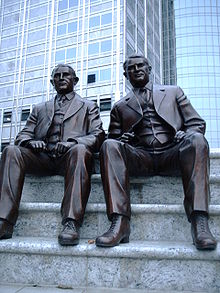 Bronze statue of the Mayo brothers, "Dr. Charlie" (left) and "Dr. Will" (right), in front of the Mayo Clinic Gonda Building in Rochester, Minnesota

On August 21, 1883, a tornado struck Rochester, causing at least 37 deaths in the area and over 200 injuries.[5] One-third of the town was destroyed, but the Mayo family escaped serious harm. The relief efforts began immediately with a temporary hospital being established at the city dance hall, and the doctors Mayo (W.W. and Will) were extensively involved in treating the injured who were brought there for help. Mother Alfred Moes and the Sisters of Saint Francis (a teaching order) were called in to act as nurses despite having been trained as teachers and with little if any medical experience.

After the crisis had subsided, Mother Alfred Moes approached W.W. Mayo about establishing a hospital in Rochester if he agreed to staff the hospital. On September 30, 1889, the dream became reality as Saint Marys Hospital opened its doors. Dr. W.W. Mayo (who by this time was 70 years of age) became the consulting physician and surgeon at the hospital, and his two sons began seeing patients and performing surgeries with the assistance of the Sisters of Saint Francis.[6]

In 1892, Dr. Augustus Stinchfield was asked to join the practice by W.W. Mayo, who considered him to be the best doctor in the small towns surrounding Rochester. After Dr. Stinchfield joined the practice, W.W. Mayo retired at the age of 73. The group practice would continue to grow, eventually adding other physicians considered today as the "founders" of the Mayo Clinic. The earliest members of the group included Mayo brothers Will and Charlie, Dr. Stinchfield, Dr. Graham, Dr. Henry Plummer, Dr. Millet, Dr. Judd, and Dr. Balfour. These early partners shared in the profits of the private group practice, while other staff hired by the partners were salaried. W.W. Mayo died in 1911, but the group practice continued strong with an ever increasing presence nationally as a cutting edge center, particularly in the area of surgery. In 1919, the group partners created the Mayo Properties Association, and their private practice became a not-for-profit entity. The Mayo Brothers, who had retained ownership of all Clinic properties and furnishings, gave everything to this newly formed association. The integrated practice model of the original partners created a foundation for what would grow into the Mayo Clinic.

The Group Practice continued steady growth throughout the 20th Century. The campus continued to grow to keep up with patient numbers and an increasing research focus of the Clinic's operations. In 1928, the Plummer Building was completed with considerable input from Clinic staff, and under the guidance of Dr. Henry Plummer (designed by John William Dawson and Ray Corwin from the architectural firm of Ellerbe & Round). At the time of its completion, it was the tallest building in Minnesota and remained so until the Foshay Tower was built finished in Minneapolis in 1929. It was added to the National Register of Historic Places in 1969, and has recently undergone a complete restoration of its bell tower. The Ellerbe firm is the architect of record for the 1914 Mayo "Red" building, the 1922 Mayo Institute of Experimental Medicine, the 1927 Plummer building (completed in 1928), the 1954 Mayo Clinic building, and the 2002 Gonda building. The historic 1914 "Red" Mayo Clinic building, a National Landmark listed on the National Register, was demolished by the Clinic in the 1980s to make way for the HGA designed Siebens building. Since 1986, the Mayo Clinic campus has formally included the Rochester Methodist Hospital and Saint Marys Hospital, as all operations were integrated under one governing board to more efficiently serve the needs of Mayo patients.[6] 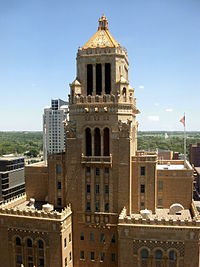 The Plummer Building in Rochester, Minnesota.

Mayo Clinic has a large presence in three U.S. metropolitan areas including Rochester, Minnesota, Jacksonville, Florida, and Scottsdale/Phoenix, Arizona. The Clinic employs more than 32,000 people at the main campus in Rochester, Minnesota.[4] The Arizona and Florida sites employ approximately 5,000 persons at each site. In addition, the Mayo Clinic owns and operates the Mayo Clinic Health System, which consists of more than 70 hospitals and clinics across Minnesota, Iowa, and Wisconsin with an employment of 14,000 persons. Mayo Clinic also operates several colleges of medicine, including Mayo Medical School, the Mayo Graduate School, and the Mayo School of Graduate Medical Education, Mayo School of Health Sciences.

As is evidenced by the Mayo Clinic logo, the institution has a three part focus. First and primary to the organization is the patient care practice, represented by the central shield. This is in accordance with the primary statement of the organization that "the needs of the patient always come first." The other two shields represent the ares of education and research, two areas of Mayo Clinic which have become more prominent over time.

Each year, more than 1 million patients from all 50 states and from more than 150 countries are seen at one of the Mayo Clinic facilities.[4] Mayo Clinic offers highly specialistic medical care, and a large portion of the patient population is referrals from smaller clinics and hospitals from across the upper Midwest and the United States as a whole. Mayo Clinic physicians are paid a fixed salary that is not linked to patient volume (relative value units) or income from fee-for-service payments. This practice is thought to decrease the monetary motivation to see patients in large numbers and increase the incentive to spend more time with individuals. Salaries are determined by the marketplace salaries for physicians in comparable large group practices.

Mayo Clinic researchers contribute to the understanding of disease processes, best clinical practices, and translation of findings from the laboratory to the clinical practice. Nearly 400 doctoral level physicians and research scientists are employed, with an additional 2,800 allied health personnel and students with appointments in research.[4] In 2010, more than 2,300 research protocols were reviewed by the Mayo Clinic Institutional review board and 8,000 ongoing human research studies. These research initiatives led to more than 5,000 research publications and review articles in peer-review journals.[4]

Dr. Henry Stanley Plummer became a partner in the Clinic practice in 1901. He is considered by many American physicians to be the "architect of the modern medical practice" and a primary reason for Mayo Clinic's early success. He designed many of the systems which are now universally used around the world today, such as a shared, individual dossier-style medical record and an interconnecting telephone system. While the Mayo brothers excelled as surgeons, Dr. Plummer is largely credited with establishing and developing the diagnostic and clinical aspects of the practice. Dr. Louis B. Wilson was hired by the Clinic in 1907—at Dr. Henry Plummer's urging—to establish research and diagnostic laboratories.

Since about the year 2000, Mayo Clinic has also become known for achieving high quality at low cost. One extensive study found that the cost paid by insurers to treat Medicare patients in their last three years of life (the most expensive years) was only 54% of comparable costs in nearby clinics and hospitals. Mayo Clinic has been researched and presented many times during the passing of the 2009 healthcare reform bills in US Congress as a model to reduce healthcare costs while increasing quality for the nation. However, Mayo Clinic issued an open letter stating the healthcare reform bills as written in July 2009 would not reduce costs or increase quality nationwide.[8]

After his retirement from Mayo in November 2009, Dr. Cortese became director of the Health Care Delivery and Policy Program at Arizona State University (ASU), Foundation Professor at ASU, and President of the Healthcare Transformation Institute. On July 29, 2010, EGHC, parent company of Essence Healthcare and other subsidiaries, announced that Dr. Cortese would join its Board of Directors.[11]