/ˈɡwɛlf/; Canada 2006 Census population 114,943)[1] is a city in Southwestern Ontario, Canada. Known as "The Royal City", Guelph is roughly 28 kilometres (17 mi) east of Waterloo and 100 kilometres (62 mi) west of downtown Toronto at the intersection of Highway 6 and Highway 7. It is the seat of Wellington County, but is politically independent of it. Because of its low crime rates, clean environment and generally high standard of living, Guelph is consistently rated as one of the country's best places to live.[3][4]. in October 2011, Guelph was noted as having the lowest unemployment rate in the country at 4.1%[5].

The name Guelph comes from the Italian Guelfo and the Bavarian-Germanic Welf. It is a reference to King George IV monarch at the time of its founding (whose family was from the House of Hanover, a younger branch of the House of Welf) and a tongue in cheek reference to the (then) ascendant German population in neighbouring Berlin. (Guelphs being the name given to the northern Italian factions who opposed the reign of the Holy Roman Empire, i.e. medieval Germany, in the 12th to 16th centuries).[6]

Before colonization, the area was considered by the surrounding indigenous communities to be a "neutral" zone. On selected dates members from these communities would meet and trade goods by the Speed River.[citation needed]

Guelph was selected as the headquarters of the Canada Company, a British development firm, by its Canadian superintendent John Galt, a popular Scottish novelist who designed the town to attract settlers to it and to the surrounding countryside.[7]

Galt designed the town to resemble a European city centre, complete with squares, broad main streets and narrow side streets, resulting in a variety of block sizes and shapes which is still in place today.[8] The street plan was designed to resemble a lady's fan, many of the streets forming triangles (the segments of the fan)[citation needed]. This technique had been used in other planned towns such as Buffalo, New York.[7]

John Galt, the first superintendent of the Canada Company, established Guelph in 1827 to serve as the company's headquarters during the development of the Huron Tract. The town later came into its own as a prosperous railway and industrial centre.[9] Guelph was founded on St. George's Day, April 23, 1827, the feast day of the patron saint of England.[8] The town was named to honour Britain's royal family, the Hanoverians, who were descended from the Guelfs, the ancestral family of George IV, the reigning British monarch; thus the nickname The Royal City. The directors of the Canada Company had actually wanted the city to be named Goderich, but reluctantly accepted the fait accompli.

Guelph is home to three National Historic Sites of Canada: the Church of Our Lady Immaculate, McCrae House and Old City Hall.[10]

Downtown Guelph is situated above the confluence of the Speed and Eramosa, which have numerous tributaries. The Speed River enters from the north and the Eramosa River from the east; the two rivers meet below downtown and continue southwest. There are also many creeks and rivers creating large tracts of densely forested ravines, and providing ideal sites for parks and recreational trails. The city is built on many drumlins and buried waterways, the most famous being an underground creek flowing below the Albion Hotel, once the source of water used to brew beer.

The weather and climate of that region of Ontario is moderate in both summer and winter.

Guelph boosts the economy from various sectors. This diversity has helped Guelph obtain the lowest unemployment rate in the country at 4.2%[12]

26.1% (90/345) of business in the manufacturing industry are categorized as Fabricated Metal Product Manufacturing businesses.[14]

Guelph is the fifth fastest growing city in Canada with a population growth rate of about 2% per year. Guelph's population according to the Ontario Places to Grow plan is projected to be about 144,500 by the year 2021. Population varies throughout the year because of variations in the University of Guelph student population.[17]

The 2001 census indicates 114,943 people residing in Guelph, of whom 49.1% were male and 50.9% were female. Children under five accounted for approximately 6.2% of the resident population of Guelph, whereas 12.2% of the resident population in Guelph were of retirement age. The average age is 35.7 years of age. In the five years between 1996 and 2001, the population of Guelph grew by 10.7%. Population density of Guelph averaged 310.1 people per square kilometre.

Now, some 10 percent of the resident population described themselves as visible minorities, predominantly South Asian mostly of Afghan, Indian and Pakistani origin: 2.43%, Chinese: 2.42%, Black Canadian/African Canadians: 1.25%, and many others including Filipino and Vietnamese. The city is mostly Christian: 74.17%, almost evenly split among Protestants and Roman Catholics. The largest non-Christian religion is Buddhism: 1.45%, followed by Hinduism.[18] 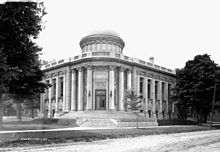 The original Carnegie library in Guelph.

Although a private library had existed since 1832, a public library did not exist in Guelph until 1882, when the Free Libraries Act allowed municipalities to operate libraries. After occupying premises near City Hall, it moved into an Andrew Carnegie-funded building in 1905,[19] which was eventually demolished in 1964. The current main branch building was opened in 1965.[20]

Guelph is served by a growing library system composed of a main branch located in the downtown core, five branches and a Bookmobile. It holds a membership of over 85,000, the Guelph Public Library system's goals include preserving and indexing public materials relating to the history of Guelph. Although no formal program has been developed, the library acquires municipal records of archival value from the City of Guelph.

The city is a single-tier municipality governed by a mayor-council system. The structure of the municipal government is stipulated by the Ontario Municipal Act of 2001. There are currently 12 councillors and a mayor, with 2 councillors representing each of the six wards.

The mayor and members of the city council serve four-year terms without term limits, with the next election in November 2010. Prior to the 2006 election, the mayor and city councillors served three-year terms.

Guelph City Council is responsible for policy and decision making, monitoring the operation and performance of the city, analyzing and approving budgets and determining spending priorities.

Guelph occupies a single provincial riding of the same name, and is currently represented in the Legislative Assembly of Ontario by Liz Sandals, a member of the ruling Ontario Liberal Party.

Guelph also occupies a federal riding of the same name, and has been represented in the House of Commons of the Parliament of Canada by Frank Valeriote of the Liberal Party of Canada since 2008. 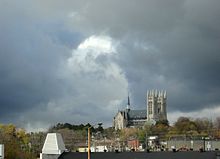 Church of Our Lady, above city 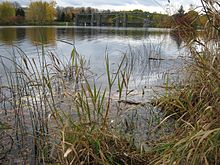 Most of the natural attractions of Guelph are located beside the two rivers which pass inside the city, Speed River and Eramosa River.

Music has always played a large part in the lives of people living in Guelph. From a Bell Organ factory to the opera singer Edward Johnson, Guelph has been a source of musical contribution. Today, Guelph is particularly notable for its indie rock scene, which has spawned some of Canada's more notable indie bands. Guelph is also home to the Hillside Festival, a hugely popular music festival held at nearby Guelph Lake during the summer, as well as the Guelph Jazz Festival.[21] 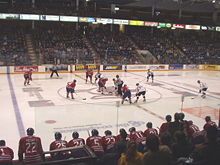 Guelph Transit provides local transportation around the city. On June 20, 2007, Guelph Transit launched a web-based system known as Next Bus.[22] Global positioning satellites (GPS) technology and advanced computer modelling provide riders via the Internet, handheld devices (including Palms, Blackberries, and Web-capable cellular phones), or their telephones to receive accurate, real-time arrival and departure information. Intercity connections are made at the Guelph Bus Terminal.

GO Transit also provides service to both the University and the city's bus station via rapid transit buses. 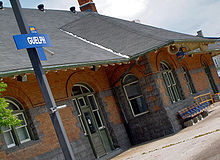 Guelph was the first municipality in Canada to have its own federally chartered railway, the Guelph Junction Railway. This 16-mile link to the CPR is still municipally owned.

The following is cited from the 2010 community profile:

"Guelph is also served by both the Canadian National Railway and the Canadian Pacific Railway. The City's own Guelph Junction Railway provides industry with freight handling facilities and connections to CNR and CPR. Via Rail provides inter‐city passenger rail service.  Plans are underway to bring Go Rail commuter service to Guelph."[23]