The 1954 FIFA World Cup Final was the final match of the 1954 FIFA World Cup, the fifth FIFA World Cup. The match was played at the Wankdorf Stadium in Bern, Switzerland, on 4 July 1954. The game saw the underdogs West Germany beat the largely favoured Hungary 3–2. In Germany, it is referred to as "Das Wunder von Bern" ("The Miracle of Bern"). The game was the subject of a 2003 German film of the same name. 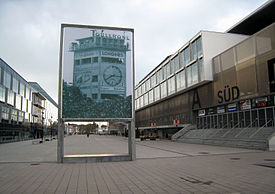 A well-known photograph of the 1954 final is installed in front of the Wankdorf's successor stadium, the Stade de Suisse.

Hungary were favourites to win the 1954 Tournament. In the five years prior to the World Cup 1954 they had remained unbeaten in 32 games, were reigning Olympic Champions and winners of the Central European International Cup in 1953. In 1953 they had defeated England 6–3, becoming the first non-UK team to beat them at Wembley Stadium, and had thrashed England 7-1 in Budapest just before the World Cup.

Hungary and West Germany had already met in the group stage, with Hungary winning 8–3. In the game, Hungarian captain Ferenc Puskás suffered a hairline fracture of the ankle and subsequently missed the next two games; even without him, Hungary beat Brazil (the previous World Cup runners-up) and Uruguay (the World Cup holders) in the quarter final and semi final respectively.

Puskas was still not fully recovered by the final, but manager Gustav Sebes selected him anyway.

The Hungarians' emphatic 8-3 victory over West Germany in the group stages was seen as a firm indication of the likely final scoreline.

After the Second World War, the three German states (West and East Germany and the Saar) were not allowed to compete in the 1950 World Cup; as a consequence, the qualification games for the 1954 World Cup were the first return of West Germany national squad to international competitions.

In the 8-3 group game defeat to Hungary, German coach Herberger fielded a reserve team. By not fielding his strongest eleven players, Herberger managed to obscure the real strength of the German team. 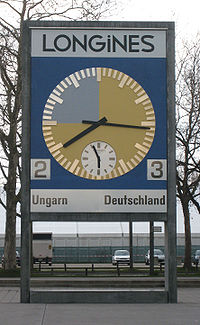 The restored match clock has been installed in front of the Stade de Suisse as a memorial.

The match was played in heavy rain, weather conditions the German side had christened "Fritz Walter-weather",[1] as the German team captain Fritz Walter was known for playing his best football under those conditions. In addition, the Germans were equipped with footwear supplied by adidas, which had produced a hitherto unheard of design of boot with exchangeable, screw-in studs that could be adapted to any weather. This enabled the German players to wear their regular boots despite the adverse weather.

Although he was not fully fit in time, Ferenc Puskás was back in the Hungarian lineup for the final match, and he put his team ahead after only six minutes. When Zoltán Czibor added the second goal for Hungary a mere two minutes later, the pre-tournament favourites seemed destined to ease to victory over Germany, just as they had in the group stages

However, Germany equalised quickly, with goals from Max Morlock (10') and Helmut Rahn (18'). Having leveled the scores, the Germans now looked a match for the Hungarians and managed to reach half time at 2–2, with both teams several promising chances to take the lead. In the second half, the Hungarians poured forward looking to retake the lead, but their attempts were repeatedly foiled by the German defence, with goalkeeper Toni Turek pulling off several fine saves.[2]

With six minutes left, German striker Helmut Rahn scored West Germany's third goal. Two minutes before the end, Puskás appeared to equalise once more, but he was ruled off-side by the Welsh linesman Benjamin Griffiths. The match and Hungary’s unbeaten run ended in one of the biggest upsets in the history of football.

Three controversial calls surround this final game, each favouring the German team. Firstly, Hungarian goalkeeper Grosics was allegedly interfered with in the goal area by Hans Schäfer for the second German goal; secondly, Puskás apparently equalised the match in the 89th minute but from an offside position; the third was an alleged foul on Kocsis in the penalty area in the final minute.

A study conducted by the University of Leipzig has revealed that the victorious German national squad may have been injected with methamphetamine prior to the match. The players believed they were being injected with Vitamin C. The study, entitled, "Doping in Germany" was sponsored by the German Olympic Committee. [3]

The unexpected win evoked a wave of euphoria throughout Germany, which was still suffering in the aftermath of World War II. This was also the first time since the Second World War that the German national anthem was played in public.[4] The 1954 victory is regarded as a turning point in post-war German history by German historians Arthur Heinrich and Joachim Fest.[citation needed]