A referee presides over a game of association football. The referee has "full authority to enforce the Laws of the Game in connection with the match to which he has been appointed" (Law 5), and the referee's decisions regarding facts connected with play are final, so far as the result of the game is concerned.

The referee is assisted by two assistant referees (formerly known as linesmen), and in some matches also by a fourth official or even a fifth official. The fifth official was first introduced by FIFA in 2006. The match officials utilise a positioning system known as the diagonal system of control. UEFA have also trialled the use of additional assistant referees who have jurisdiction over the goal areas and help interpret incidents in the immediate goal area or if the ball has crossed the goal line in the act of scoring a goal.[1]

The vast majority of referees are amateur, though they are usually paid a small fee and/or expenses for their services. However, in some countries a limited number of referees – who mainly officiate in their country's top league – are employed full-time by their national associations and receive a retainer at the start of every season plus match fees.

The referee's powers and duties are described by Law 5 of the Laws of the Game.[2] These include:

Referees use a whistle to indicate the commencement or restart of play, to stop or delay play due to an infringement or injury, or to indicate that time has expired in the half. The whistle is an important tool for the Referee along with verbal, body and eye communication. The use of whistles is not mandated by the Laws of the Game.

The whistle was not mentioned in the Laws of the Game (LOTG) until very recently. The LOTG simply mentions the referee should signal certain events. In 2007, when IFAB greatly expanded the LOTG Additional Instructions section, a full page of advice on how and when the whistle should be used as a communication and control mechanism by the referee became available.[3]

Before the introduction of the whistle, referees indicated their decisions by waving a handkerchief. The whistles that were first adopted by referees were made by Joseph Hudson at Mills Munitions in Birmingham, England. The ACME Whistle Company (based at Mills Munitions Factory) first began to mass produce pea whistles in the 1870s for the Metropolitan Police Service. It is frequently stated the referee's whistle was first used in a game between Nottingham Forest and Sheffield Norfolk in 1878; however no such fixture is known to have taken place between the two clubs in that year. 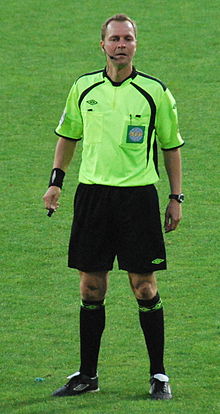 Modern day referees and their assistants wear a uniform consisting of a jersey, badge, shorts and socks: until the 1950s it was more common for a referee to wear a blazer than a jersey. Traditionally that uniform was almost always all black, unless one of the teams was wearing a very dark jersey in which case the referee would wear another colour of jersey (usually red) to distinguish himself from both teams. At the 1994 World Cup finals, new jerseys were introduced that gave officials a choice of burgundy, yellow or white, and at the same time the creation of the Premier League in England saw referees wear green jerseys: both changes were motivated by television considerations. Since then, most referees have worn either yellow or black, but the colours and styles adopted by individual associations vary greatly. For international contests under the supervision of FIFA, Adidas uniforms are worn because Adidas is the current sponsor. FIFA allows referees to wear five colours: black, red, yellow, green and blue. Along with the jersey, referees are required to wear black shorts, black socks (with white stripes in some cases), and black shoes. The badge, which displays the referee's license level and year of validity, is often affixed to the left chest pocket.

All referees carry a whistle, a watch, penalty cards, a data wallet with pen and paper, and a coin for determining who gets the first kick-off in each half. Most are encouraged to have more than one of each on them in case they drop a whistle or a pen runs out and so on. Often, referees utilize two watches so that they can use one to calculate time lost for stoppages for the purposes of added time. At the highest levels, referees wear a two-way radio to communicate between each other and assistant referees use electronic flags, which send a signal to the referee when the button is pushed. Specific guidelines concerning the use of technology are written by FIFA and IFAB to aid referees as to when they can and cannot (or should not) be used.

Referees in football are first described by Richard Mulcaster in 1581.[4] In this description of "foteball" he advocates the use of a "judge over the parties". In the modern era, referees are first advocated in English public school football games, notably Eton football in 1845.[5] A match report from Rochdale in 1842 shows their use in a football game between the Bodyguards Club and the Fearnought Club.[6]