Dall's porpoise (Phocoenoides dalli) is a species of porpoise found on the North Pacific. It came to worldwide attention in the 1970s when it was disclosed for the first time to the public that salmon fishing trawls were killing thousands of Dall's porpoises and other cetaceans each year by accidentally capturing them in their nets. The Dall's porpoise is the only member of the Phocoenoides genus. It was named after American naturalist W. H. Dall.

Dorsal view of a Dall's porpoise

The unique body shape of the Dall's porpoise makes it easily distinguishable from other cetacean species. The animal has a very thick body and a small head. The colouration is rather like that of a killer whale(orca); the main body of the porpoise is very dark grey to black creeper, with very demarcated white patches on the flank and belly. The dorsal fin is set just back from the middle of the back and sits up erect. The upper part of the dorsal fin has a white to light grey "frosting".

The fluke has a similar frosting. The adult fluke curves back towards the body of the animal, which is another distinguishing feature. It is larger than other porpoises, growing up to 2.3 metres (7 ft 7 in) in length and weighing between 130 and 200 kg. There is also sexual dimorphism in the species, with males being larger, having a deeper caudal peduncle and a pronounced hump behind the anus.[3] Young Dall's have a greyish tint and dark-colored flukes. 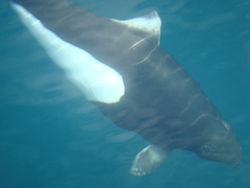 A Dall's porpoise on a calm day in the Shelikof Strait

The Dall’s porpoise ranges through much of the North Pacific and adjacent seas, such as the Bering and Okhotsk Seas and the Sea of Japan. The southernmost part of its range is southern Japan in the west and southern California in the east, while it is northernmost range is the central Bering Sea.[4] They do enter Scammon's Lagoon in Baja California, though, when the waters are unseasonably cold.[5] They also travel up to the Chukchi Sea, though very rarely.[4]

The Dall’s porpoise prefers cold waters more than 180 metres (590 ft) deep .[3] It is found over the continental shelf adjacent to the slopes and oceanic waters.[6] While it mostly lives in offshore waters, it does occur in deep nearshore and inshore waters on the west coast of North America.[4] There, it typically stays close to deep-water canyons.

Two consistent and well-defined colour morphs, the dalli-type and the truei-type, have been identified. The dalli-type is present throughout the porpoise’s range, while the truei-type is limited to the western Pacific between 35° N and 54° N.[3] These morphs have been considered different in colour pattern (the truei-type having a more extensive belly patch) and not separate subspecies.[5] However, some genetic evidences suggests that there statistically significant genetic differentiation was found between them.[7] They are believed to number around 104,000 off Japan, 554,000 in the Okhotsk Sea, 83,000 off Alaska and 100,000 off the continental US.[4]

Dall’s porpoises eat a variety of small fishes and cephalopods.[4] Schooling fish, such as herrings, anchovies, pilchards, mackerels, hake and sauries[3][4] are common prey, as well as mesopelagic fish such as myctophids and deep sea smelts.[4] They may also consume krill, but these are probably not important in their diet.[4] Dall’s porpoise are also deep divers. They have been recorded to dive to 94m.[8] Dall’s porpoise are prey to killer whales and white sharks. They also are susceptible to certain parasites. The trematode fluke Nastitrema, an internal parasite, is known to cause death and stranding of the porpoises.[4] External parasites of the porpoise are whale lice. 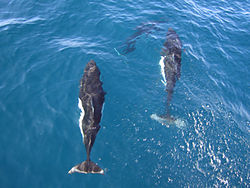 A group of Dall's porpoises near Point Reyes

Dall's porpoises are highly active creatures. They will often zigzag around at great speed on or just below the water surface, creating a spray called a "rooster tail". They may appear and disappear quite suddenly. The fastest of all small cetaceans, Dall's porpoises can swim at up to 55 km/h, almost as fast as the killer whale. The porpoises will approach boats and will bow- and stern-ride, but may lose interest, unless the boat is travelling quickly. They will also "snout ride" on bow waves pushed forward by the heads of large whales.[4] When they move more slowly, they roll at the surface in a subdued manner like other porpoises.[4] They rarely do aerial behaviours such as breaching and leaping.[4]

Dall’s porpoises live in small, fluid groups of two to 12.[3] Loosely associated groups can form feeding aggregations involving tens to hundreds, and rarely thousands, of individuals.[3] They have a polygynous mating system in which males will guard females in estrus.[9] During the mating season, a male will closely attend and defend a fertile female from other males to ensure his own paternity.[9] Males that are paired with females have agonistic interactions with other adult males, and associate with extra-pair individuals infrequently.[9] Guarding males tend to take shorter dives than nonguarding males, which suggests a trade-off between diving and gaurding.[9] The calving season for all studied populations is mostly in the summer.[4] Porpoise gestation lasts 10 to 11 months, and the lactation period lasts at least two months.[3] Females in their prime can give birth annually.[3] Dall's porpoises live for up to 15 years. 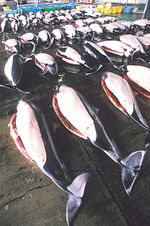 Dall's porpoises at market in Japan

One study[10] determined through DNA sequencing that a fetus found in British Columbia was an intergeneric hybrid of a Dall's porpoise and a harbour porpoise. This hybrid may not be rare— it may describe the origins of some atypically coloured individuals that otherwise appear to be Dall's porpoises spotted off the coast of Vancouver Island.

Many Dall's porpoises are killed each year as by-catch in fishing nets.[citation needed] A serious cause of concern is the hunting of the species by harpoon by Japanese hunters[citation needed]. The number of porpoise caught each year rose dramatically following the moratorium on hunting larger cetaceans introduced in the mid-1980s. The greatest number were caught in 1988, when more than 40,000 were taken. International attention to the hunt through a 1990 International Whaling Commission (IWC) resolution resulted in a reduction in numbers caught; however, around 15,000 animals are still caught each year, making it the largest direct hunt of any cetacean species in the world. The hunt has been repeatedly criticized by the IWC and its Scientific Committee, most recently in 2008.[11] A quota of just over 16,000 individuals per year is now in effect. In addition, unknown numbers of animals are struck and lost or caught as by catch. Despite these threats, the Dall's porpoise remains a fairly common species with productive populations.