Cetartiodactyla is the clade in which whales (including dolphins) and even-toed ungulates have currently been placed. The term was coined by merging the name for the two orders, Cetacea and Artiodactyla, into a single word. The term Cetartiodactyla reflects the idea that whales evolved within the artiodactyls. Under this definition their closest living land relative is thought to be the hippopotamus. The clade formed by uniting whales and hippos is called Whippomorpha. Alternatively, the term Cetartiodactyla is used to denote a clade where Cetacea evolved alongside Artiodactyla and not within it. Under this definition, all artiodactyls, including hippos, are more closely related to one another than any are to the whales.

This group has been proposed as a new order, but there is not sufficient evidence of the exact relationship between the two current orders to efficiently merge them.

Whales evolved from land mammals and appear to form a monophyletic group. It is well accepted that all whales evolved from a single ancestor. The most widely accepted hypothesis before the 1990s was that the closest relatives to whales were the fossil group Mesonychia. These were hooved, predominantly carnivorous, mammals that are known only from fossils. But today, few authorities still consider mesonychids to be more closely related to whales than artiodactyls. Instead, they are usually considered to be the closest relative of the Cetartiodactyla as a whole. 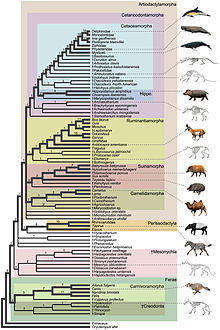 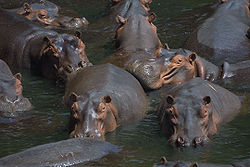 The idea that whales evolved from within the Artiodactyla is based on analysis of DNA sequences. In the initial molecular analyses, whales were shown to be more closely related to ruminants (such as cattle and deer) than ruminants are to pigs. In order for the order name to reflect a real evolutionary unit, the term Cetartiodactyla was coined.

Later molecular analyses included a wider sampling of artiodactyls and produced a more complete tale. Hippos were determined to be the closest relative of whales, ruminants were related to a whale/hippo clade, and pigs were more distant. In addition to producing the controversial whale/hippo clade, these analyses debunked the idea that hippos and pigs are closely related. This had been a popular taxonomic hypothesis (Suiformes) based on similarities in morphological (physical) characteristics.

In addition to DNA and protein sequences, researchers tracked the movement of transposons called SINEs in the genome (see the method at retrotransposon marker). A transposon is a DNA sequence that will occasionally make a copy of itself and insert that copy into another part of the genome. It is considered highly unlikely that SINEs will insert themselves into exactly the same part of a genome by chance. The data indicate that several transposons inserted themselves at the same point in the genomes of whales, ruminants and hippos (sometimes referred to as "pseudoruminants" because although they have four-chambered stomachs like true ruminants, they do not chew the cud). This insertion point is not shared with camels and pigs.

This hypothesis has been tested with DNA sequences from a host of genes: the complete mitochondrial genome (as well as several of its genes independently), beta-casein, kappa-casein, von Willebrand factor, breast cancer 1, recombination activating genes 1 and 2, cannabinoid receptor 1, and several others. These sequence data and the transposons converge on the same conclusion that hippos and whales are more closely related to one another than either is to other artiodactyls.

Sequences analyzed in combined analyses with morphological characters have also produced the same results as sequences alone. Some have argued that the sheer number of characters (one for each nucleotide) in sequences swamps out the effects of morphology. There have been a few morphology-based studies that have suggested (weakly) the same results as the molecular results, but overall most morphological studies have conflicted with the whale/hippo hypothesis of Cetartiodactyla.

An important exception is a recent study conducted by Boisserie et al. (2005). They examined 80 hard morphological characters of fossil and extant cetartiodactylan taxa. Their results suggest that hippopotamids evolved from within a clade of anthracotheres. That anthracothere/hippopotamid clade appears to be sister to the Cetacea and supports the molecular results.

The morphology and paleontology-based opinion of the relationship of whales to other mammals has also undergone considerable changes since the early 1990s. Fossils such as Rodhocetus, have been discovered that refute the notion that whales are derived from or are closely related to the mesonychids. Many morphologists[who?] and paleontologists support the notion of a clade called Cetartiodactyla that unites Cetacea + Artiodactyla. Many[who?] are not, however, in support of the hypothesis that Cetacea evolved from within the Artiodactyla. Under this definition, Artiodactyla remains a valid clade since artiodactyls evolved from a common ancestor separate from whales. Cetartiodactyla would represent a grandorder or superorder uniting the two orders.

The vast majority of phylogenetic analyses based on morphological characters have not uncovered a whale/hippo clade, but show Cetacea and Artiodactyla as distinct from one another.[citation needed] Features of the bones of the astragalus in the ankle region are cited as particular evidence for a monophyletic Artiodactyla. In any case, an origin of the Cetacea from within the Ungulata was proposed as early as 1900 by Frank Evers Beddard in A book of whales. But Beddard found the anatomical and fossil record at that time insufficient to rule out other possibilities, such as the notion that whales are a basal lineage among placental mammals, or the popular theory relating them to terrestrial carnivores. Because Beddard himself was not fully convinced, his bold proposal was largely forgotten.

Hippo fossils are not observed until the Miocene, but whale ancestors have been dated to the Eocene. The whale/hippo hypothesis imposes a gap of nearly 30 million years where no hippo ancestors are present. Certain anthracotheres have been proposed as hippo ancestors, but this concept has not garnered wide support among paleontologists. However, the most recent hypothesis into the origins of hippopotamids suggests that hippos and whales shared a common semi-aquatic ancestor that branched off from other Artiodactyls around 60 million years ago.[1][2] This hypothesized ancestral group likely split into two branches around 54 million years ago.[3] One branch would evolve into cetaceans, possibly beginning with the proto-whale Pakicetus from 52 million years ago with other early whale ancestors collectively known as Archaeoceti, which eventually underwent aquatic adaptation into the completely aquatic cetaceans.[4] Thus, Cetartiodactyla is supported as a monophyletic group.

The ancestral cetartiodactyl karyotype is 2n = 48.[5]