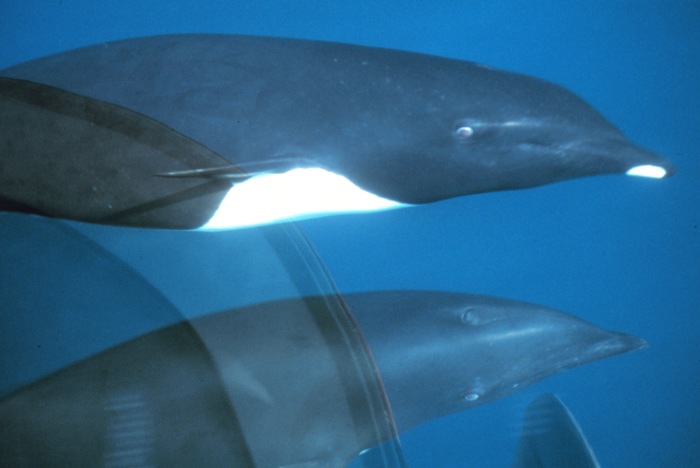 range_map_width = 250px
range_map_caption = Northern and Southern Right Whale Dolphin rangesThe right whale dolphins, the ("Lissodelphis borealis") and the ("Lissodelphis peronii"), are two of the easiest s to identify at sea. Both these s are coloured black and white and have no . Despite scientists being long acquainted with the species (the Northern species was identified by Peale in 1848 and the Southern even earlier - Lacépède, 1804) surprisingly little is known about them in terms of life history and behaviour.

Both species have slender bodies, small, pointed flippers and a small fluke. Conspicuously, neither species has a dorsal fin. The Northern Right Whale Dolphin is the only dolphin in the Pacific with this property. Similarly, the Southern is the only finless dolphin in the southern hemisphere. The two species can be readily distinguished (apart from the geographical separation in their ranges) by the extent of the whiteness on the body. Both have white bellies; however, the extent of white coloration on the Southern species is much more extensive - including the flanks, flippers, beak and forehead.

Northern males are about 220cm long at sexual maturity. Females are 200cm. Both sexes become mature at about 10 years. New-born Right Whale Dolphins are about half the length of their parents. The Southern species is typically larger (up to 250cm) and heavier (up to 100kg compared with the Northern's maximum of 80-90kg). The dolphins live for about 40 years.

The is widely distributed in the temperate North Pacific in a band running from Kamchatka and mainland in the west to down to the in the east. It is not known with certainty if they follow a migratory pattern. However, individuals have been observed close to the n shore following their main food source, , in winter and spring. Such sightings have not been recorded in summer. Otherwise these dolphins are pelagic. No global population estimates exist. There are an estimated 14,000 individuals close to the North American shoreline.

The has a circumpolar distribution running from about 40° to 55°. They are sighted in the in particular.

Both species are highly gregarious. They move in pods of several hundred individuals and sometimes congregate in groups of 3000 [4] . The groups may also contain s and s (in the south) and s (in the north). These dolphins are some of the fastest swimmers (in excess of 40km/h). They can by turns become very boisterous and breach and tail-slap or become very quiet and almost undetectable at sea. At high speed they can leap up to 7 metres across the ocean's surface in a graceful bouncing motion.

The species will generally avoid boats, but bow-riding has been recorded on occasion.

No strandings have been recorded for the Northern species. There has been one recorded instance of 77 Southern Right Whale Dolphins stranding on .

Neither species is hunted and the long-term survival of the species is currently assessed to be secure under present conditions. However tens of thousands of the northern species were killed in the 1980s due to them becoming caught in oceanic drift s introduced at that time. Gillnets were banned by the in 1993. Conservation campaigners work vigorously to try to ensure these bans are retained.