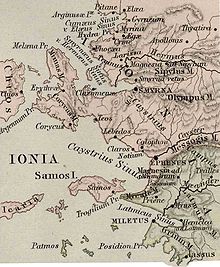 Colophon (Greek Κολοφών) was a city in the region of Lydia in antiquity dating from about the turn of the first millennium-BC. It was likely one the oldest of the twelve Ionian League cities, between Lebedos (120 stadia to the west) and Ephesus (to its south) and its ruins are in the eponymously named modern region of Ionia.

The city's name comes from the word κολοφών, 'summit', which is also the origin of the bibliographic term 'colophon', in the metaphorical sense of a 'crowning touch', as it was sited along a ridgeline. The term "colophony" for rosin comes from the term colophonia resina, that is, resin from the pine trees of Colophon, which was highly valued for the strings of musical instruments.

The ruins of the city are at the Castro of Ghiaour-Keui, a minor village in İzmir, Menderes.

In Greek antiquity two sons of Codrus, King of Athens, established a colony there. It was the birthplace of the philosopher Xenophanes and the poet Mimnermus.

Colophon was the strongest of the Ionian cities and renowned both for its cavalry and for the inhabitants' luxurious lifestyle, until Gyges of Lydia conquered it in the 7th century BC. Colophon then went into decline and was eclipsed by neighbouring Ephesus and by the rising naval power of Ionia, Miletus.

After the death of Alexander the Great, Perdiccas expelled the Athenian settlers on Samos to Colophon, including the family of Epicurus, who joined them there after completing his military service.

In the 3rd century BC, it was destroyed by Lysimachus—a Macedonian officer, one of the successors (Diadochi) of Alexander the Great, later a king (306 BCE) in Thrace and Asia Minor, during the same era when he nearly destroyed (and did depopulate by forced expulsion) the neighboring Ionian League city of Lebedos.

Notium served as the port, and in the neighbourhood was the village of Clarus, with its famous temple and oracle of Apollo Clarius, where Calchas vied with Mopsus in divinatory science.

In Roman times, after Lysimachus' conquest, Colophon failed to recover (unlike Lebedos) and lost its importance; actually, the name was transferred to the site of the port village of Notium, and the latter name disappeared between the Peloponnesian War and the time of Cicero (late 400s BC to 1st century BC).

Additionally, the city, as a major location on the Ionic mainland, was cited as a possible home or birthplace for Homer. In his True History, Lucian lists it as a possible birthplace along with the island of Khios and the city of Smyrna, though Lucian's Homer claims to be from Babylon.

The "Notitiae Episcopatuum" mentions Colophon or Colophone, as late as the 12th or 13th century, as a suffragan of Ephesus. Lequien (I, 723) gives the names of only four bishops:

It is a titular see of Asia Minor.