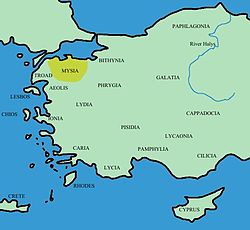 Cyzicus was a town of Mysia.

Cyzicus (Greek: Κύζικος, Kyzikos; Ottoman Turkish: آیدینجق, Aydıncıḳ) was an ancient town of Mysia in Anatolia in the current Balıkesir Province of Turkey. It was located on the shoreward side of the present Kapıdağ Peninsula (the classical Arctonnesus), a tombolo which is said to have originally been an island in the Sea of Marmara only to be connected to the mainland in historic times either by artificial means or an earthquake.

The site of Cyzicus, located on the Erdek and Bandırma roads, is protected by Turkey's Ministry of Culture.

The city was said to have been founded by Pelasgians from Thessaly, according to tradition at the coming of the Argonauts; later it received many colonies from Miletus, allegedly in 756 BC, but its importance began only after the Peloponnesian War, when the decay of Athens and Miletus set in. Alcibiades defeated the Lacedaemonians there (410 BC). The era of its Olympiads was reckoned from 135 or 139.

Owing to its advantageous position it speedily acquired commercial importance, and the gold staters of Cyzicus were a staple currency in the ancient world till they were superseded by those of Philip of Macedon. Its unique and characteristic coin, the cyzicenus, was worth 28 drachmae.

During the Peloponnesian War (431-404 BC) Cyzicus was subject to the Athenians and Lacedaemonians alternately. In the naval Battle of Cyzicus in 410 during the Peloponnesian War, an Athenian fleet routed and completely destroyed a Spartan fleet. At the peace of Antalcidas (387 BC), like the other Greek cities in Asia, it was made over to Persia. Alexander the Great later captured it from the Persians in 334 BC and was later claimed to be responsible for the land bridge connecting the island to the mainland.

The history of the town in Hellenistic times is closely connected with that of the Attalids of Pergamon, with whose extinction it came into direct relations with Rome. Cyzicus was held for the Romans against King Mithridates VI of Pontus who besieged it with 300,000 men in 74 BC, but it withstood him stoutly, and the siege was raised by Lucullus: the loyalty of the city was rewarded by an extension of territory and other privileges. The Romans favored it and recognized its municipal independence. Cyzicus was the leading city of Northern Mysia as far as Troas. 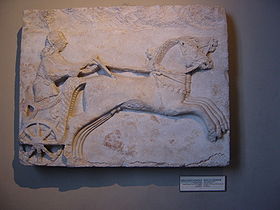 Under Tiberius, it was incorporated into the Roman Empire but remained the capital of Mysia (afterwards, Hellespontus) and became one of the great cities of the ancient world.

Cyzicus was captured temporarily by the Arabs in 675. It appears to have been ruined by a series of earthquakes since 443 with the last in AD 1063. It began to be largely deserted as early as the eleventh century and the population was transferred to Artaki at least as early as the 13th century, when the peninsula was occupied by the Crusaders.

In the Ottoman era, it was part of the kaza of Erdek in the province of Brusa.

A titular see of Asia Minor, metropolitan of the ancient ecclesiastical province of Hellespontus. As ecclesiastical metropolis of the Roman Hellespontus province, Cyzicus had a catalogue of bishops beginning with the first century; Michel Le Quien (I, 747) mentions fifty-nine. A more complete list is found in Nicodemos, in the Greek "Office of St. Emilian" (Constantinople, 1876), 34-36, which has eighty-five names. Of particular importance are the famous Arian; Eunomius of Cyzicus; Saint Dalmatius; Proclus of Constantinople and Germanus of Auxerre, who became Patriarchs of Constantinople; and Saint Emilian, a martyr in the eighth century. Another Saint who came from Cyzicus is Saint Tryphaena of Cyzicus. Tryphaena is the patron saint of the city. Gelasius, a historian of Arianism, who wrote about 475, was born at Cyzicus. Lequien (III, 941) mentions a Latin bishop in 1477.

Cyzicus is still a metropolitan title for the Greek Orthodox, the metropolitan residing at Artake (Erdek), a little port on the western shore of the peninsula. Opposite to Artake is another port, Peramos (Perama), where an Assumptionist Father founded a Greek parish. At Panormos (Panderma), another more important port nine miles (14 km) south-east of the ruins of Cyzicus (10,000 inhabitants), there is a Catholic Armenian parish. At the Dardanelles there is also a Latin parish. It remains a Catholic titular see.

The site amid the marshes of Balkiz Serai is known as Bal-Kiz and entirely uninhabited, though under cultivation. The principal extant ruins are the walls, dating from the fourth century, which are traceable for nearly their whole extent, and the substructures of the temple of Hadrian, the ruins of a Roman aqueduct and a theatre.

The picturesque amphitheatre, intersected by a stream, built in the third century B.C., was one of the largest in the world; its diameter was nearly 500 feet (150 m). Of this magnificent building, sometimes ranked among the seven wonders of the ancient world, thirty-one immense columns still stood erect in 1444. These have since been carried away piecemeal for building purposes.

Colossal foundations of a temple dedicated to the Emperor Hadrian are still visible: the columns were 21.35 metres high (about 70 feet), while the highest known elsewhere, those at Baalbek in Syria are only 19.35 metres (about 63 feet).

The monuments of Cyzicus were used by the Byzantine emperor Justinian as a quarry for the building of his Saint Sophia cathedral, and were still exploited by the Ottomans.