Coal mining in the United Kingdom

Coal mining in the United Kingdom 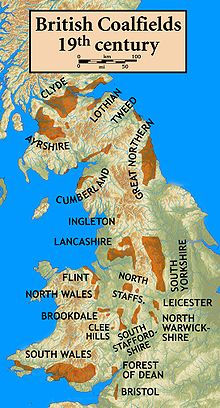 Coalfields of the United Kingdom in the 19th century.

Coal mining in the United Kingdom probably dates to Roman times and took place in many different parts of the country. Britain's coalfields are associated with Northumbria and Durham, North and South Wales, Yorkshire, Scotland, Lancashire, the East and West Midlands and Kent. During the 1980s and 1990s the industry was scaled back considerably. In 2011 there are deep mines at Kellingley Colliery in Yorkshire, and Daw Mill Colliery, Warwickshire both run by UK Coal. Maltby colliery is a deep mine near Rotherham owned and operated by Hargreaves Services PLC. There are numerous open cast mines in the UK.

It is probable that the Romans used outcropping coal when working iron or burning lime burning for building purposes. Evidence is mostly from ash discovered at excavations of Roman sites.[1] There is no mention of coal mining in the Domesday Book of 1086 though lead and iron mines are recorded.[2] In the 13th century there are records of coal digging in Durham[3] and Northumberland,[4] Nottinghamshire and Derbyshire, Staffordshire, Lancashire, the Forest of Dean and North[5] and South Wales. At this time coal was referred to as sea cole a reference to coal washed ashore on the north east coast of England from either the cliffs or undersea outcrops. The early mines would have been drift mines or adits where coal seams outcropped or by shallow bell pits where coal was close to the surface.[6] Shafts lined with tree trunks and branches have been found in Lancashire in workings dating from early 17th century and by 1750 brick lined shafts to 150 foot depth were common.

Coal production increased dramatically in the 19th century as the Industrial Revolution gathered pace, especially as a fuel for steam engines such as the Newcomen engine, and later, the Watt steam engine. A key development was the invention at Coalbrookdale in the early 18th century of coke which could be used to make pig iron in the blast furnace. The development of the steam locomotive by Trevithick early in the 19th century gave added impetus, and coal consumption grew rapidly as the railway network expanded through the Victorian period. Coal was widely used for domestic heating owing to its low cost and widespread availability. The manufacture of coke also provided coal gas, which could be used for heating and lighting.[citation needed]