Drax Group
For other uses of "Drax", see Drax (disambiguation). 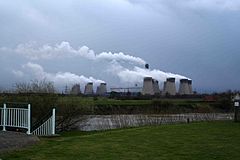 Drax Group plc (LSE: DRX) is a British electrical power generation company. The company's principal subsidiary is Drax Power Limited, owner of the Drax power station near Selby in North Yorkshire, the largest coal-fired power station in Europe which supplies about 7% of UK electrical consumption. The company is a constituent of the FTSE 250 Index as of 22 June 2009.[2]

The plant was troubled by the fall in wholesale energy prices and the collapse of TXU Europe into administration.[4] TXU had taken 60% of its output. AES abandoned the plant to its creditors in August 2003, leaving a total debt of around US$2 billion.[5] BHP Billiton, International Power, RWE and E.ON were all touted as potential buyers, although all reported bids were for less than US$200 million. These offers were rejected, and the subsequent rise in energy prices meant that by late 2005 the plant's owners were receiving offers in the region of £2 billion. However, negotiations were not concluded successfully and, in September 2005, Drax Power Ltd announced that the latest bid to buy Drax had failed.[6] On 15 December 2005 Drax Group plc floated its shares on the London Stock Exchange.[7]

The business of Drax Group is the sale of electricity to the wholesale market as well as the sale of products of power generation such as pulverised fuel ash. The Drax power station consists of 6 units of 660 MW each. Total capacity is around 4 GW which is equivalent to roughly 5% of total installed capacity in the UK. In 2009, the company produced 22.6 TWh of electricity or some 7% of all power production in the UK. Coal is the key fuel for the company and in 2009 it burnt some 8 million tons of coal. Part of the coal is coming from domestic sources, but the majority is from overseas suppliers. Next to coal, the company uses small amounts of biomass and petcoke as fuel.

Drax now supplies electricity directly to the market through its subsidiary Haven Power,[8] which the company acquired in 2009. Haven supplied some 0.7 TWh in 2009 to small and medium sized enterprises. Haven will also target the industrial and commercial market for direct electricity sales.