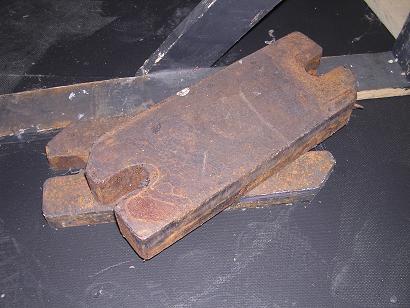 puddling process of smelting to make from pig iron, the right half of the illustration (not shown) displays men working a , "Tiangong Kaiwu" published in 1637, written by (-).]

Pig iron is the intermediate product of with coke, usually with as a flux. Pig iron has a very high content, typically 3.5 - 4.5%,

The traditional shape of the molds used for these was a branching structure formed in , with many individual ingots at right angles to a central channel or "runner." Such a configuration is similar in appearance to a litter of s suckling on a . When the metal had cooled and hardened, the smaller ingots (the "pigs") were simply broken from the much thinner runner (the "sow"), hence the name "pig iron". As pig iron is intended for remelting, the uneven size of the ingots and inclusion of small amounts of sand was insignificant compared to the ease of casting and of handling.

The Chinese were making pig iron by the later . In , the process did not become common until the .

Pig iron is typically poured directly out of the bottom of the through a into a ladle car for transfer to the steel plant in mostly liquid form, referred to as hot metal. The hot metal is then charged into a vessel to produce , typically with an or , by burning off the excess carbon in a controlled fashion and adjusting the composition. Earlier processes for this included the , , , and the .

Modern s and direct-reduction iron plants transfer the molten iron to a ladle for immediate use in the steel making furnaces or cast it into pigs on a pig casting machine for reuse or resale. Modern pig casting machines produce stick pigs, which break into smaller 4-10 kg pieces at discharge.

Pig iron can also be used to produce . This is achieved by remelting pig iron, often along with substantial quantities of iron, and removing undesirable contaminants, adding alloys, and adjusting the carbon content.

Pig iron is melted and a strong current of air is directed over it while it is being stirred or agitated. This causes the dissolved impurities (such as silicon) to be thoroughly oxidized. The metal is then cast into molds or used in other processes. This is known as refined pig iron, finers metal or refined iron.