The United Kingdom's Climate Change Programme was launched in November 2000 by the British government in response to its commitment agreed at the 1992 United Nations Conference on Environment and Development (UNCED). The 2000 programme [1] was updated in March 2006 following a review [2] launched in September 2004.

In 2008, the UK was the world's 9th greatest producer of man-made carbon emissions, producing around 1.8% of the global total generated from fossil fuels. 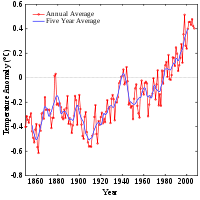 Global mean surface temperatures 1856 to 2007
See also: Energy use and conservation in the United Kingdom

When the original programme was published in 2000, it confirmed that UK emissions were already forecast to be around 15% lower by 2010.

As of March 2006, government projections were in line with the official energy policy of the United Kingdom) so that, by 2010, the UK will have reduced its carbon dioxide emissions by about 15-18% below 1990 levels, thus missing the government's internal target but achieving its Kyoto Protocol target, with a projected reduction of emissions from the basket of all greenhouse gases (including carbon dioxide) of about 23-25% from 1990 levels.[3]

The stated strategies of the 2000 programme were to:

The following are among the actions taken to implement the strategy:

On 26 November 2008, after cross-party pressure over several years, led by environmental groups, the Climate Change Act became law. The Act puts in place a framework to achieve a mandatory 80% cut in the UK's carbon emissions by 2050 (compared to 1990 levels), with an intermediate target of between 34% by 2020 which would have risen in the event of a strong deal at the UN Climate Change Conference in Copenhagen.

Introduced on 1 April 2002, the Renewables Obligation requires all electricity suppliers who supply electricity to end consumers to supply a set portion of their electricity from eligible renewables sources; a proportion that will increase each year until 2015 from a 3% requirement in 2002-2003, via 10.4% in 2010-2012 up to 15.4% by 2015-2016. The UK Government announced in the 2006 Energy Review an additional target of 20% by 2020-21. For each eligible megawatt hour of renewable energy generated, a tradable certificate called a renewables obligation certificate(ROC) is issued by OFGEM.

On or before 31 September following the RO year (1 Apr - 31 Mar) Suppliers can meet their Renewables Obligation by:

The renewables obligation also makes requirements about how the electricity can be generated. An example is that the co-firing of biomass with coal is to be phased out - and will not be eligible for Renewable Obligation Certificates after 2016 (although the government has announced its intention to revisit the co-firing rules as part of the 2006 Energy Review).

The renewables transport fuel obligation is a separate law, which although is not in force yet, is set to become law. It would require bio-ethanol and bio-diesel to be added to road fuel, up to a limit of 2 or 5.75%. The land required for this would be considerable. It has been estimated (by the NFU) that the biomass could be grown by using all of the UKs net wheat exports, and growing wheat on 1,200 square kilometres of land.
While this may look like a large amount, it is achievable.

Grants to assist with the installation of renewable energy sources in domestic properties and for community groups were made available through the Clear Skies organisation, and the Major Photovoltaics Demonstration programme. In 2006 these were replaced by the Low Carbon Buildings Programme (LCBP).

The CRC Energy Efficiency Scheme is a mandatory cap and trade scheme, announced in May 2007, that will apply to large non energy-intensive organisations in the public and private sectors, including hotel chains, supermarkets, banks, central government and large Local Authorities. It is anticipated that the scheme will have cut carbon emissions by 1.2 million tonnes of carbon per year by 2020.[4]

The CRC scheme will apply to organisations that have a mandatory half-hourly metered electricity consumption greater than 6,000 MWh per year. This roughly equates to an electricity bill above £500,000 (US$1,000,000), although it would apply to emissions from direct energy use as well as electricity purchased.[5]

Although not part of the central government programme, in local government, a growing number of councils have signed up to the Nottingham Declaration, launched on 25 October 2000, committing them to work towards reducing emissions.