The CRH380A is an electric high-speed train designed by China South Locomotive & Rolling Stock Corporation Limited (CSR) and manufactured by CSR Qingdao Sifang Locomotive & Rolling Stock Co., Ltd. A continuation of the CRH2-350 program it both replaces foreign technology in the CRH2 with Chinese developments and increases the top speed.[2] The CRH380A is designed to operate at a cruise speed of 350 km/h (217 mph) and a maximum of 380 km/h (236 mph) in commercial service. The original 8-car train-set recorded a top speed of 416.6 km/h (258.9 mph) during a trial run[3] and the longer 16-car train-set holds the world record for the fastest production train at 486.1 km/h (302.0 mph).[4]

CRH380A is one of the four Chinese train series which have been designed for the new standard operating speed of 380 km/h (236 mph) on newly constructed Chinese high-speed main lines. The other three are CRH380B, CRH380C and CRH380D. The CRH380B has been developed by China North Locomotive and Rolling Stock Industry (Group) Corporation (CNR) in cooperation with Siemens, and it is manufactured by Tangshan Railway Vehicle and Changchun Railway Vehicle. The CRH380C is based on the CRH380B. It incorporates a redesigned nose and electrical equipment from Hitachi. The CRH380D is Bombardier's Zefiro 380, which is a special design for China Railways, to be produced at Bombardier Sifang (Qingdao) Transportation Ltd, a joint venture by Bombadier and CSR Sifang. 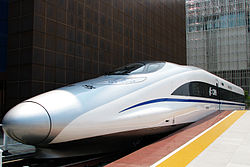 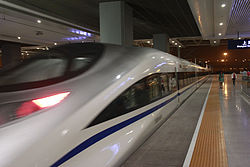 The development started in early 2008, during the research procedure of CRH2-300 (later CRH2C), the CSR conducted more than 1000 technical tests covering 17 specific areas such as dynamic performance, pantograph-catenary current collection, aerodynamics, and traction performance. CSR discovered the technology to increase the maximum speed. These research findings were fed into the design for the new-generation high-speed train.[2]

The original project was named "CRH2-350". On February 26, 2008,the Chinese Ministry of Science and Ministry of Railway signed the Agreement on Joint and Independent Innovations of China High-speed Trains, CRH2-350 is one of the most important projects of this plan, the purpose is to develop Chinese designed new-generation High Speed train with continuous operating speed to be 350 km/h (217 mph), and maximum operating speed up to 380 km/h (236 mph). The new generations of rolling stock are expected to be used on the Beijing-Shanghai High-Speed Railway. the project officially launched in 2009, and was included in the "Eleventh Five-Year Plan"'s National technology support program for key technology and equipment development of China' s high speed train.

The design work includes four categories: schematic, technical, construction, and experimentation/verification. based on the analysis of large amounts of data and experience from the operation of the Beijing-Tianjin high-speed rail. the MOR completed a series of initial system and optimized subsystem design, then provided CSR sifang with primary data and design. CSR presented more than 20 types of designs.[5] After further comparison, calculation, optimization, simulation and testwork, on April 12, 2010, the final design was published on the Official conference held by Sifang.The train model was exhibited in May at the China Railway Pavilion in the Shanghai World Expo Park (IRJ July p5).

On September 2009, the Ministry of Railways (MOR) for china had ordered 100 16-car and 40 eight-car new-generation high-speed trains from CSR Sifang Locomotive & Rolling Stock, the contract worth 45 billion RMB (US$ 6.64 billion).

The prototype vehicle was rolled off on April, 2010, the eight-car train was being tested on the China Academy of Railway Sciences experimental loop line (Beijing loop line) startes from April 26, 2010. and started trial runs on the Zhengzhou - Xi'an high-speed line on June 7, 2010.

The initial standard CRH380A trainsets was delivered on August 2010,[6] The first test on conventional rail, based on a daily-service mode, was conducted on September 28, 2010.

The test was held on the Shanghai–Hangzhou High-Speed Railway (also known as the Huhang high-speed railway, "Hu" stands for "Shanghai", "Hang" stands for Hangzhou; Hangzhou is the capital city of Zhejiang Province).[9] The trainset with series number CRH380A-6001 reached the maximum speed of 416.6 km/h (258.9 mph).[9]

CRH380A entered into daily service immediately after the test. Since September 30, 2010, it has been serving the Shanghai–Nanjing High-Speed Railway occasionally.

CRH380A started daily service at the Wuhan-Guangzhou High-Speed Railway as of December 3, 2010.[16]

Each CRH380A has eight coaches, Units with standard compartments were formed as follows: