The N700 series (N700系?) is a Japanese Shinkansen high-speed train with tilting capability developed jointly by JR Central and JR West for use on the Tōkaidō and Sanyō Shinkansen lines, and also operated by JR Kyushu on the Kyushu Shinkansen line.

All Nozomi through runs (over the full route between Tokyo and Hakata) were scheduled to use the N700 exclusively by 2009. By 2011, all regularly scheduled Nozomi services, including runs limited only to the Tokaido Shinkansen, will be operated by the N700.[3]

The N700 is also used on select Hikari services during the day, as well as some early-morning and late-night Kodama runs between Tokyo and Mishima/Hamamatsu.

Since March 2009, the N700 series trains have been equipped with wireless internet available for use between Tokyo and Shin-Osaka.[4]

The prototype 16-car train (Z0) was delivered in March 2005 for extensive testing and endurance running. Cars 1 to 4 were built by Hitachi Ltd., cars 5 to 14 were built by Nippon Sharyo, and cars 15 and 16 were built by Kawasaki Heavy Industries.[5]

The prototype set Z0 remains as a JR Central test train with cars numbered in the -9000 series, and is not used in revenue service. 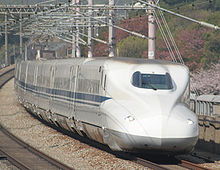 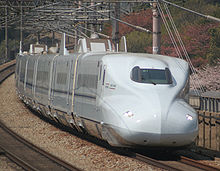 The N700-7000 series variant are 8-car sets operated by JR West on through-running Sakura and Mizuho services between Shin-Osaka and Kagoshima-Chūō on the Kyushu Shinkansen since 12 March 2011.[7] The pre-production set (S1) was delivered to Hakata Depot in October 2008. These trains do not feature the tilting mechanism of the earlier N700 trains, as they do not run on the Tōkaidō Shinkansen.[8]

Cars 2 and 7 each have one single-arm pantograph.

The N700-8000 series variant consists of ten 8-car sets operated by JR Kyushu alongside JR West N700-7000 series "S" sets on through-running Sakura and Mizuho services between Shin-Osaka and Kagoshima-Chūō on the Kyushu Shinkansen since 12 March 2011.[10]

JR Central announced on 30 May 2011 that a new version of the N700 series design would be introduced from 2012 with design improvements to replace older 700 series sets. The new version will be known as the "N700A" (with "A" standing for "Advanced") and classified as "N700-1000". Externally identical to the existing N700 series sets, the new design will include modified brake discs, bogie vibration detection, and ATC improvements. 6 sets are scheduled to be introduced during fiscal 2012, with 7 more sets introduced during fiscal 2013.[14]

This is a proposed export version of the N700 series design announced by JR Central Chairman Yoshiyuki Kasai at an international high-speed railway symposium held in Nagoya on 16 November 2009.[15] Nominally specified as an 8-car set with a maximum operating speed of 330 km/h (205 mph), the train can be configured in lengths from 6 to 15 cars to suit customer requirements.[16]

On 16 November 2009, JR Central conducted a late-night high-speed demonstration run using N700 series trainset Z0, recording a maximum speed of 332 km/h (206 mph) on the Tōkaidō Shinkansen between Maibara and Kyoto. The high-speed run was conducted as a demonstration for approximately 160 international guests attending a high-speed railway symposium in Nagoya.[17][18]