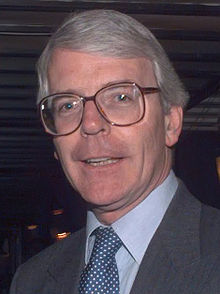 The 1995 Conservative leadership election was initiated when incumbent leader and Prime Minister John Major resigned as leader on 22 June 1995, in order to face down critics within his party. On 4 July 1995 he was re-elected, beating the only other candidate, former Secretary of State for Wales John Redwood.

For some years the Conservative Party had been deeply divided on the issue of the European Union and there had been much speculation each year that Major would be challenged for the leadership during the annual re-election of the leader each November. Many both within and without the party believed that the constant speculation was highly damaging and so Major took the dramatic step to force an early contest.

Under the rules at the time, introduced in 1965 and modified in 1975, there would be a series of ballots, conducted by the 1922 Committee, with that committee's chairman, Sir Marcus Fox, serving as Returning Officer.

Since the leadership was vacant, candidates required the nomination of only two MPs. In the first round a candidate needed to win the backing of an absolute majority of MPs. In addition they needed to have a margin over their nearest rival of 15% of the total electorate.

Had neither of these been achieved then a second ballot would take place the following week. Nominations would be re-opened and at this stage an absolute majority only would be required. If this did not happen then the top two candidates would go forward to a third round.

Because of this process, the first round was widely regarded as the expression of confidence or otherwise in Major. Many speculated that if he did not achieve outright victory then there would be further rounds, when various prominent Conservatives would stand, regarding a first round candidate as a "stalking horse".

Candidates and their platforms

John Major announced he would be a candidate for re-election from the outset and stood pledging continuity in office and the continuation of a broad based approach to government.

The only candidate to enter the race was John Redwood, who resigned from the Cabinet as Secretary of State for Wales. Redwood ran on a staunchly Eurosceptic Thatcherite manifesto.

Prominent Conservatives who did not stand

Interest was generated when it was reported that both Heseltine and Portillo had had a large number of telephone lines installed at offices, widely presumed (and, in Portillo's case, correctly)[1] to be a preparation for a second round bid. When this was raised during Prime Minister's Questions Major laughingly attributed this to the effect of telephone privatisation. During the voting Heseltine felt the need to publicly display his ballot paper to show that he had voted for Major.

The period between the launch of the election and polling was short. The main interest occurred when Michael Heseltine publicly and strongly endorsed Major, which many commentators felt reinforced his position. Redwood's leadership bid came under much fire. His campaign slogan was "No change, no chance". A poster was issued on his behalf, written by Redwood's campaign manager David Evans, which urged Conservatives to vote Redwood to "Save Your Seat, Save Your Party, and Save Your Country". At a personal level his nickname of "the Vulcan" reached prominence and much lampooning in the media, whilst his formal launch of his campaign was dismissed as a collection of all the mavericks on the right of the party, widely undermining his bid's credibility.

The first and only ballot

The first ballot was as follows:

Major had both an outright majority and the necessary 15% margin, but had received only three more votes than his private minimum target of 215. Had he polled lower he had made up his mind to resign outright.[2]

No further contested leadership election took place until after the Conservatives lost the 1997 general election. The party temporarily reunited. Michael Heseltine had given Major staunch support in the contest and as a result was promoted to the position of Deputy Prime Minister. However many believed that Heseltine had now missed his last chance to become Prime Minister, an analysis that Heseltine himself agreed with when his memoirs were published several years later.

Portillo's failure to stand was widely felt to have cost him dearly. Redwood emerged as a clear alternative leader of the right of the party whilst many argued Portillo had lacked the nerve to make a first round challenge and potentially allowed Major to survive.

William Hague, still aged only thirty-four at the time, was promoted to the Cabinet to Redwood's position as Welsh Secretary. When Major resigned as leader after losing the 1997 general election, Hague was thus in a position to stand for, and win, the leadership.