/kɒˈnɑrɡoʊ/) is a small rural town located in the Riverina region of New South Wales, Australia and is the seat of Conargo Shire. It is situated on the Billabong Creek, a tributary of the Murrumbidgee River. The nearest towns are Jerilderie and Deniliquin. At the 2006 census, Conargo had a population of 188 people.[1]

The Aboriginal name for the locality of Conargo was 'Gooriara', meaning "hopping" or "kangaroo ground".[3] The actual town itself is quite small, with only a pub, a convenience store that sells fuel and a small number of houses, however the Shire now covers an area of approximately 8830 square kilometres and has a population of 1806. There are five nearby villages - Blighty, Mayrung, Pretty Pine, Wanganella and Booroorban.[4]

The surrounding rural area consists of large sheep stations, including some Merino studs.

In 1859 William McKenzie opened the Conargo Inn there (named after the nearby "Conargo" pastoral run). A township at Conargo was laid out in 1860 by the surveyor McCulloch. During 1865 another hotel was built at the village - the Riverine Hotel (publican James McKeys). At about the same time the Conargo Inn, together with 320 acres (1.3 km2), was sold for £1,857 to T. Robertson. Conargo Post Office opened on 1 September 1864 and closed in 1988.[5] In 1866 Conargo was reported as having a population of thirty persons, with a post-office, a store, and two hotels.  In 1867 the Billabong Hotel was added to Conargo's hotels (with David Rogers as its first publican). In 1869 the Baker brothers built a store there. In 1872 Conargo was described as a small village with a store and three hotels.[6]

In February 1878 a correspondent to the Town and Country Journal said: "Conargo... was once - according to tradition - intended to be a town, which attempt finally diminished to a total failure". The writer added that the proprietor of the only store in the village had recently died after "a long and continued illness". Of the three hotels it was claimed the Conargo Hotel was the "better house", doing "a great deal more business than the other two combined".[7] 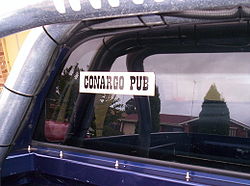 Conargo is famous amongst people who attend Ute Musters (who are known locally as Friggers) because of the humour in visiting a pub in such a remote location.

Ute enthusiasts often decorate their vehicles with bumper stickers, and to cash in on this market the Conargo Pub as it is known, offers stickers that read "CONARGO PUB" in black writing on a white backdrop. Since, Conargo's town is neighbouring Deniliquin which hosts the worlds largest Ute Muster, the popularity of the Conargo pub sticker has spread amongst the ute community and adorning their vehicle with one has developed into a status symbol among ute enthusiasts[citation needed].