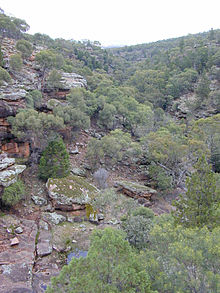 Cocoparra National Park is located 25 kilometres northwest of Griffith, in the Riverina region of south western New South Wales.[1] It includes a prominent range of hills such as Bingar Mountain, 455 metres above sea level and Brogden Mountain, 390 metres above sea level, in an otherwise largely flat landscape. Adjoining the national park to the north is Cocoparra Nature Reserve. The national park was gazetted in 1969 and has an area of 8358 hectares. The nature reserve was dedicated in 1963 with an area of 4647 hectares (Cocoparra National Park Plan of Management 1995). The Binya-Cocoparra area is classified by BirdLife International as an Important Bird Area because of its relatively large population (of up to 50 individuals) of the near threatened Painted Honeyeater, as well as the Diamond Firetail.[2]

The climate is semi arid. The vegetation communities reflect this, with wattles, orchids, ironbark and blue-tinged cypress pines.[1]

There are a number of day use (picnic) areas in the park and a campground at Woolshed Flat.