The U.S. partnership with the Netherlands is one of its oldest continuous relationships and dates back to the American Revolution. Starting in the late 16th century, the Dutch and other Europeans began to colonize the eastern coast of North America. The Dutch named their territory New Netherlands, which became a province of the Dutch Republic in 1624. The Dutch colonial settlement of New Amsterdam later became New York City. The present-day flag of New York City is based on the flag of Republic of the United Netherlands.[citation needed]

The United States and the Netherlands often have similar positions on issues and work together both bilaterally and multilaterally in such institutions as the United Nations and NATO. The Dutch have worked with the United States at the World Trade Organization, in the Organisation for Economic Co-operation and Development, as well as within the European Union to advance the shared U.S. goal of a more open and market-led world economy.

The United States and the Netherlands joined NATO as charter members in 1949. The Dutch were allies with the United States in the Korean War and the first Gulf War and have been active in global peacekeeping efforts in the former Yugoslavia, Afghanistan and Iraq. Netherlands also support and participate in NATO and EU training efforts in Iraq. Until August 1, 2010 they were active participants in the International Security Assistance Force and Operation Enduring Freedom in Afghanistan. 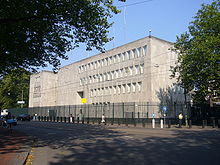 The American embassy in The Hague