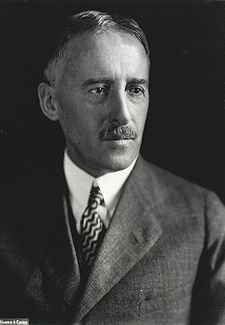 The Stimson Doctrine is a policy of the United States federal government, enunciated in a note of January 7, 1932, to Japan and China, of non-recognition of international territorial changes that were executed by force. The doctrine was an application of the principle of ex injuria jus non oritur.[1] While some analysts have applied the doctrine in opposition to governments established by revolution, this usage is not widespread, and its invocation usually involves treaty violations.[1]

Named after Henry L. Stimson, United States Secretary of State in the Hoover Administration (1929–1933), the policy followed Japan's unilateral seizure of Manchuria in northeastern China following action by Japanese soldiers at Mukden (now Shenyang), on September 18, 1931.[2] The doctrine was also invoked by U.S. Under-Secretary of State Sumner Welles in a declaration of July 23, 1940 that announced non-recognition of the Soviet annexation and incorporation of the three Baltic states—Estonia, Latvia, and Lithuania[3]—and remained the official U.S. position until the Baltic states gained formal international recognition as independent states in 1991.

It was not the first time that the U.S. had used non-recognition as a political tool or symbolic statement. President Woodrow Wilson had refused to recognise the Mexican Revolutionary governments in 1913 and Japan's 21 Demands upon China in 1915.[citation needed]

The Japanese invasion of Manchuria in late 1931 placed U.S. Secretary of State Henry M. Stimson in a difficult position. It was evident that appeals to the spirit of the Kellogg-Briand Pact had no impact on either the Chinese or the Japanese, and the secretary was further hampered by President Herbert Hoover’s clear indication that he would not support economic sanctions as a means to bring peace in the Far East.[4]

On January 7, 1932, Secretary Stimson sent identical notes to China and Japan that incorporated a diplomatic approach used by earlier secretaries facing crises in the Far East. Later known as the Stimson Doctrine, or sometimes the Hoover-Stimson Doctrine, the notes read in part as follows:

...the American Government deems it to be its duty to notify both the Imperial Japanese Government and the Government of the Chinese Republic that it cannot admit the legality of any situation de facto nor does it intend to recognize any treaty or agreement entered into between those Governments, or agents thereof, which may impair the treaty rights of the United States or its citizens in China, including those that relate to the sovereignty, the independence, or the territorial and administrative integrity of the Republic of China, or to the international policy relative to China, commonly known as the open door policy...[5]

Stimson had stated that the United States would not recognize any changes made in China that would curtail American treaty rights in the area and that the "open door" must be maintained. The declaration had few material effects on the Western world, which was burdened by the Great Depression, and Japan went on to bomb Shanghai.[4]

The doctrine was criticized on the grounds that it did no more than alienate the Japanese.[6]