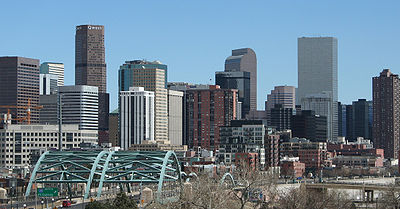 Skyline of Denver (Use cursor to identify buildings)

The history of skyscrapers in Denver began with the completion of the Equitable Building in 1892; this building, rising 143 feet (44 m) and nine floors, was the first high-rise in Denver.[4] The title of the city's "first skyscraper" is usually given to the Daniels & Fisher Tower, which rises 371 feet (113 m) and was completed in 1910.[5][6] The city went through a large building boom that lasted from the early 1970s to the mid 1980s. During this time, 21 of the city's 27 tallest buildings were constructed, including Republic Plaza, 1801 California Street, and the Wells Fargo Center. The city is the site of seven skyscrapers over 492 feet (150 m) in height, including two which rank among the tallest in the United States. Overall, the skyline of Denver is ranked (based upon existing and under construction buildings over 492 feet (150 m) tall) second in the Mountain States (after Las Vegas) and seventeenth in the United States.[A] As of June 2008[update], there are 190 completed high-rises in the city.[7]

The skyline of downtown Denver with Speer Boulevard in the foreground, facing east 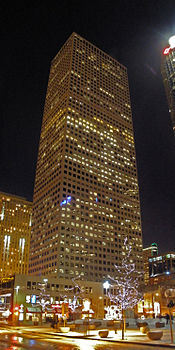 The Wells Fargo Center, the third-tallest building in Denver 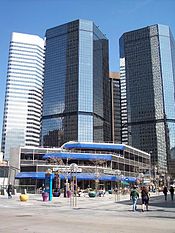 This lists ranks Denver skyscrapers that stand at least 350 feet (107 m) tall, based on standard height measurement. This includes spires and architectural details but does not include antenna masts. The "Year" column indicates the year in which a building was completed.

Tallest under construction and proposed

This lists skyscrapers that are under construction and proposed in Denver and planned to rise over 350 feet (107 m), but are not yet completed structures. A floor count of 40 stories is used as the cutoff in place of a height of 400 feet (122 m) for buildings whose heights have not yet been released by their developers.

* Table entry without text indicate that information regarding building height has not yet been released. 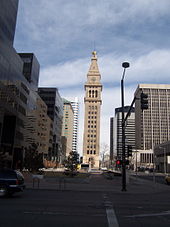 The Daniels & Fisher Tower stood as the tallest building in Denver from 1910 until 1957.

This lists buildings that once held the title of tallest building in Denver.