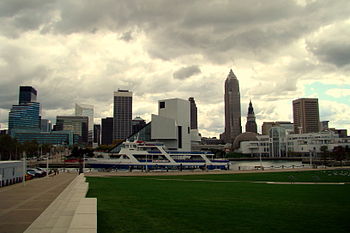 The history of skyscrapers in Cleveland began in 1889 with the construction of the Society for Savings Building, often regarded as the first skyscraper in the city.[3] Cleveland went through an early building boom in the late 1920s and early 1930s, during which several high-rise buildings, including the Terminal Tower, were constructed. The city experienced a second, much larger building boom that lasted from the early 1970s to early 1990s, during which time it saw the construction of over 15 skyscrapers, including the Key Tower and the BP Tower. Cleveland is the site of four skyscrapers that rise at least 492 feet (150 m) in height. Overall, the skyline of Cleveland is ranked (based upon existing and under construction buildings over 492 feet (150 m) tall) 5th in the Midwestern United States (after Chicago, Minneapolis, Detroit and Columbus) and 20th in the United States, after New York City, Chicago, Miami, Houston, Los Angeles, Dallas, Atlanta, San Francisco, Boston, Las Vegas, Seattle, Philadelphia, Pittsburgh, Jersey City, Minneapolis, Detroit, Denver, Charlotte and Columbus.[A]

Unlike many other major American cities, Cleveland has been the site of relatively few skyscraper construction projects in recent years. The most recently completed skyscraper in the city is the Carl B. Stokes Federal Court House Building, which was constructed in 2003 and rises 430 feet (131 m).[4] As of June 2008, there are nine high-rise buildings proposed for construction in the city; none are approved or under construction.[5]

Skyline of Cleveland from Lake Erie, with the Key Tower, the BP Building and the Terminal Tower at the center

This list ranks Cleveland skyscrapers that stand at least 250 feet (76 m) tall, based on standard height measurement. This includes spires and architectural details but does not include antenna masts. An equal sign (=) following a rank indicates the same height between two or more buildings. The "Year" column indicates the year in which a building was completed. 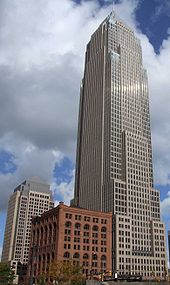 Key Tower, the tallest skyscraper in Cleveland and Ohio 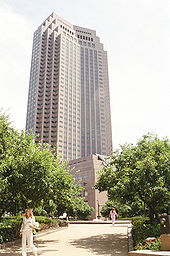 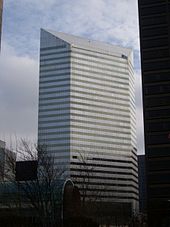 One Cleveland Center, the fifth-tallest building in the city 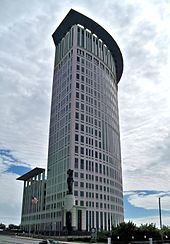 The Federal Court House Tower, the seventh-tallest building in the city

* Table entries without text indicate that information regarding building heights and/or expected year of completion has not yet been released.

The Terminal Tower stood as tallest building in Cleveland for 61 years, from 1930 until 1991.

This lists buildings that once held the title of tallest building in Cleveland.

A. ^ New York has 216 existing and under construction buildings at least 492 feet (150 m), Chicago has 114, Miami has 32, Houston has 31, Los Angeles has 26, Dallas has 20, San Francisco has 21, Atlanta has 19, Boston has 19, Las Vegas has 16, Seattle has 15, Philadelphia has 15, Pittsburgh has 10, Jersey City has 9, Minneapolis has 11, Detroit has 8, Denver has 7, Charlotte has 6, and Columbus has 5. Source of Skyline ranking information: SkyscraperPage.com diagrams: New York, Chicago, Miami, Houston, Los Angeles, Dallas, Atlanta, San Francisco, Las Vegas, Boston, Seattle, Philadelphia, Pittsburgh, Jersey City, Minneapolis, Denver, Detroit, Charlotte, Columbus, Cleveland.
B. ^ The Union Trust Building has since been renamed the Huntington Bank Building.
C. ^ The Ohio Bell Building has since been renamed the AT&T Huron Road Building.