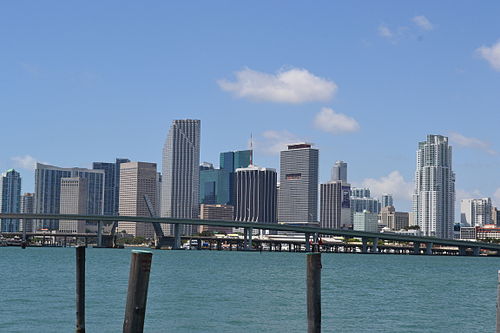 The Downtown Miami skyline in May 2011

Miami's history of high rises began with the 1912 completion of the six story Burdine's Department Store, although the Freedom Tower, built in 1925, is Miami's best known early skyscraper, and remains an icon of the city.[4][5] From the late 1990s through the late 2000s, Miami went through the largest building boom in the city's history. In what was dubbed a "Manhattanization wave",[6] there were nearly 60 structures proposed, approved or under construction in the city that were planned to rise over 492 feet (150 m) in height. As a result of the construction boom, only three of the city's 25 tallest buildings were completed before the year 2000, and the city has one of largest skylines in the United States. The boom, however, ended abruptly in 2008 when the real estate market crashed and the late-2000s recession began. As of May 2011[update], the construction of many skyscrapers has been suspended, and many proposed high-rise projects in the city have been canceled or delayed. In 2011, two major development proposals, both by foreign developers, were planned in Miami. One is the $700 million Brickell CitiCentre by Hong Kong based Swire, and the other is the $3.1 billion dollar Resorts World Miami for the Omni district by Malaysian based Genting Group, whom is seeking a gambling license to include a Las Vegas style casino as a major attraction. Both proposals cover several acres of largely undeveloped land and are planned to include several skyscrapers that would rank as some of the tallest in the city.

The tallest active skyscraper development currently taking place in Miami is One Bayfront Plaza, a mixed-use building proposed for 100 South Biscayne Boulevard. The tower, a supertall skyscraper that has been approved for construction since 2007, when it was scheduled to be completed in 2015.[7] Since then it has gone through several design changes and is being given a start date of 2014. One Bayfront Plaza is the tallest building ever to be approved for construction in the city, and is expected to rise 1,010 feet (308 m), with 80 floors.[8] It also has the distinction of being the first skyscraper over 1,000 feet (305 m), also known as "supertall," to be approved in Miami. Proposals for comparably tall buildings in Miami is very rare due to the proximity of Miami International Airport (MIA). The main runways of MIA align planes taking off and landing right over the downtown area, and for this reason the Federal Aviation Administration sets precise height limits for construction in Downtown Miami. The location of the One Bayfront Plaza proposal is within the highest alloted height zone in Miami, and is proposed at the maximum height allowed of 1,010 feet (308 m)[9]

This lists ranks Miami skyscrapers that stand at least 400 feet (120 m) tall, based on standard height measurement. This includes spires and architectural details but does not include antenna masts.[B] An equal sign (=) following a rank indicates the same height between two or more buildings. The "Year" column indicates the year in which a building was completed.

* indicates still under construction, but has been topped out

Tallest under construction, proposed, and approved

All of the planned high-rise buildings that were not constructed by the 2008 financial crisis were either put on hold or cancelled altogether until 2011 as the market was becoming stable once again. Construction on all of the buildings listed below began the construction phase however none of them got passed the site preparation, the ground phase, before being put on hold. Many of them have been re-approved and construction may begin any time.

Under construction or on hold

This lists buildings that are under construction in Miami and are planned to rise at least 400 feet (122 m). Buildings that have already been topped out are not included.

* Table entry without text indicates that information regarding building height has not yet been released.

This lists buildings that are approved in Miami and are planned to rise at least 400 feet (122 m). The years are crossed out because they were all put on hold by the economic downturn, but many still hold their approval.

This lists buildings that are proposed in Miami and are planned to rise at least 400 feet (122 m). The years shown are their original planned completion years, before they were put on hold by the economic downturn.

There have been several buildings in Miami that have served as the tallest building in the city. While the 5-story Burdine's Department Store was the first high-rise building in the city, the Freedom Tower is generally regarded as Miami's first skyscraper.[4][5] Not included in this list is the Coral Gables Biltmore Hotel located in nearby Coral Gables, Florida, which is located just outside of Miami and would have qualified as the tallest building from 1926 to 1928 standing 315 feet (96 m). If the New World Tower, constructed in 1965 at 357 feet (109 m) had been four feet higher, it would have surpassed the Dade County Courthouse and been the tallest building until 1972 when One Biscayne Tower was completed. From 2003 to 2008, the Manhattanization of the city led to a huge amount of new development. Several buildings that were under construction, approved, or proposed could have earned the title of tallest building in the city upon completion. However, other than the Four Seasons Hotel (2003), none of them made it before the market crashed in 2007.

Downtown Miami seen from the Port of Miami in January 2009

Downtown Miami skyline as seen from Miami Beach in January 2008

Midtown Miami skyline as seen from Miami Beach in January 2008

A. ^ a b c Due to differences in floor count measurements, some sources state the Four Seasons as having 70 floors, while others say 64. One of the engineering companies purported it as 67.

B. ^ a Due to strict zoning in the City of Miami and the FAA approval needed for each building, none of the tallest buildings in Miami have a defined spire.

C. ^ a This building was originally known as the Ralston Building, but has since been renamed the Carrion Jewelry Center.