Skyline of Columbus in January 2006 (Use cursor to identify buildings)

The history of skyscrapers in Columbus began with the completion in 1900 of 16 East Broad Street, which is regarded as the first high-rise in the city.[5][6] This structure stands 13 stories and 180 feet (55 m) in height.[5] Columbus went through an early high-rise construction boom in the 1920s, during which time the city saw the completion of the 555-foot (169 m) LeVeque Tower, which stood as the tallest structure in Columbus for 46 years. However, the pace of new high-rise construction then remained slow until 1960; starting in that year, Columbus entered into a large building boom that lasted until 1991. During that time, most of the city's tallest skyscrapers were built, including the Rhodes State Office Tower and the William Green Building.[1][7] Although no Columbus skyscraper ranks among the tallest in the United States, the city is the site of five skyscrapers at least 492 feet (150 m) high. Based on existing and under-construction buildings over 500 feet (152 m) tall, the skyline of Columbus is ranked first in Ohio, fourth in the Midwest (after Chicago, Minneapolis, and Detroit) and 19th in the country.[A] As of June 2008, there are 80 completed high-rises in the city.[8] Columbus ranks third in the state in high-rise count after Cleveland and Cincinnati, which have 124 and 120 completed high-rises respectively.[9][10]

Columbus has been the site of very little high-rise construction since the construction boom ended in 1991 with the completion of First Third Center in 1998; since then, only four skyscrapers that rank in city's 20 tallest buildings have been constructed, the tallest being the 314-foot (96 m) Miranova Condominiums.[11] The most recent high-rise development in the city was The Condominiums at North Bank Park, which was completed in 2007.[12] As of July 2008, there are no new high-rise buildings under construction in Columbus. However, there are two major high-rise reconstructions taking place in mid-2008 in the city; Eight on the Square and the Grange Mutual Companies Building are being renovated.[13][14] The largest high-rise development taking place in Columbus is Buggyworks Phase II, which is expected to rise 23 stories in height; it is the city's only building proposed for construction that is taller than 20 stories.[15] 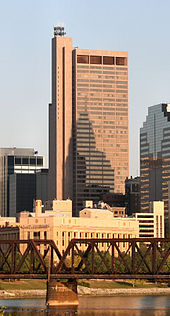 Rhodes State Office Tower is the tallest building in Columbus. 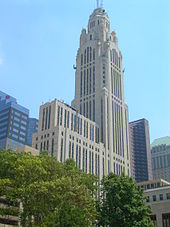 LeVeque Tower is the second-tallest building in Columbus. 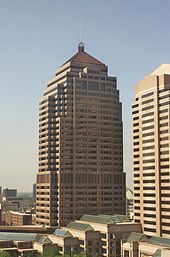 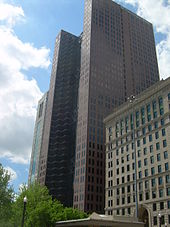 Huntington Center is the fourth-tallest building in Columbus. 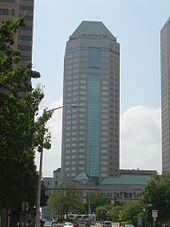 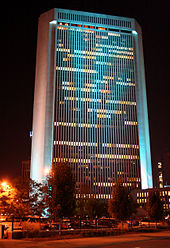 One Nationwide Plaza, the sixth-tallest building in Columbus 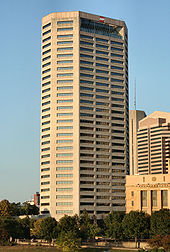 The AEP Building, the eighth-tallest building in the city 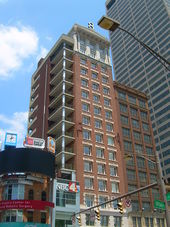 This list ranks Columbus skyscrapers that stand at least 150 feet (46 m) tall, based on standard height measurement. This includes spires and architectural details but does not include antenna masts. An equal sign (=) following a rank indicates the same height between two or more buildings. The "Year" column indicates the year in which a building was completed.

This lists the skyscraper that is proposed for construction in Columbus and is planned to rise at least 250 feet (76 m) in height, but is not yet a completed structure. A floor count of 20 stories is used as the cutoff in place of a height of 250 feet (76 m) because the building's exact height has not yet been released by its developer. The tallest building under construction in the city, as of June 2010, is the new Nationwide Children's Hospital. This 12-story, 200-foot-tall (61 m) hospital is the second largest children's hospital in the world. It is located on the South Side, at the intersection of Parsons and Livingston.

* Table entry without text indicates that information regarding building height has not yet been released. 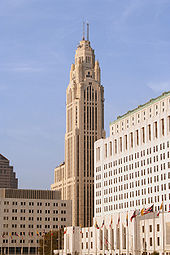 The LeVeque Tower stood as the tallest building in Columbus from 1927 until 1973.

This lists buildings that once held the title of tallest building in Columbus.

A. ^ New York has 216 existing and under construction buildings at least 492 feet (150 m), Chicago has 114, Miami has 32, Houston has 31, Los Angeles has 26, Dallas has 20, San Francisco has 21, Atlanta has 19, Boston has 19, Las Vegas has 16, Seattle has 15, Philadelphia has 15, Pittsburgh has 10, Jersey City has 9, Minneapolis has 11, Detroit has 8, Denver has 7, Charlotte has 6, and Columbus has 5. Source of Skyline ranking information: SkyscraperPage.com: New York, Chicago, Miami, Houston, Los Angeles, Dallas, Atlanta, San Francisco, Las Vegas, Boston, Seattle, Philadelphia, Pittsburgh, Jersey City, Minneapolis, Denver, Detroit, Charlotte, and Columbus.