For the 2009 Federal Trade Commission case see In the Matter of Sears Holdings Management Corporation.

The company maintains its corporate headquarters in Hoffman Estates.

On November 17, 2004, Kmart Holdings Corporation announced its intention to purchase Sears, Roebuck and Co. The new corporation announced that it would continue to operate stores under both the Sears and Kmart brands. The merger of Kmart and Sears closed on March 24, 2005, following affirmative shareholder votes of both companies. Sears Holdings will operate Sears and Kmart stores. The company will continue to market products under brands held by both companies.

The new company is directed by a board of directors composed of members from the two companies: seven members from Kmart's board, and three from Sears. Shareholders in the Kmart Corporation received one share in the new company. Shares of Sears, Roebuck and Company stock were converted into a combination of 55 percent stock and 45 percent cash (at $50 a share). Stockholders had a choice of receiving either stock or cash, subject to the predefined ratio.

The merger was completed on March 24, 2005, after receiving regulatory approval from the government and approval by shareholders of both companies.

It would be well to note the organization of the Board of Directors mentioned in a previous paragraph. The Chairman of the Board of Kmart retained his position because Kmart Corporation owned controlling shares of Sears.

Kmart/Sears have scrubbed/changed much of the press releases, other documents, and internet connections in relation to this takeover to make it appear that this was a simple merger. On examining some of the old documents it can be seen that the articles start out with "Kmart Holding Company" replacing "Kmart Corporation" but farther down in the article you will find references to "Kmart Corporation", NOT "Kmart Holding Company".

The exterior of a typical Sears Essentials store.

Sears Holdings continues to operate stores under the Sears and Kmart mastheads. In 2005, Sears introduced a new store format called Sears Essentials; some Kmart stores were converted to Sears Essentials, as well as a few locations that were acquired from Wal-Mart and several bankrupt discount retailers. The new store format combined the Sears store concept with the Kmart format, which was supposed to help the company better compete with Wal-Mart and Target. The project has since been resigned, and merged with the Sears Grand concept.

Sears Holdings has begun cross-selling merchandise between its two brands. For example, Craftsman tools are now available in Kmart stores; they were previously exclusive to the Sears brand. However, Martha Stewart brand paint colors are now no longer available at Sears.

Sears Holdings owns 92 percent of Sears Canada,[4] a large department store chain in Canada, similar to the U.S. stores. (Sears Holdings failed in 2006 to buy the remainder of Sears Canada that it does not own because Bill Ackman took a 17.3 percent stake in it and prevented any takeover. He accepted to sell his stake at $30 a share on April 23, 2010.) Sears Holdings also owns 20 percent of Sears Mexico; Carlos Slim owns the other 80 percent. Like Target stores, Kmart-branded stores in Australia belong to Wesfarmers (which acquired former owners Coles Group in 2007); Wesfarmers also holds the rights to the Kmart brand in New Zealand.

In November 2006, speculation rolled around as The Chicago Sun Times reported that Sears may buy Safeway, Home Depot, Gap, Radio Shack, Pep Boys, Anheuser Busch or all six companies.[5] The Washington Post, in a March 11, 2007, article, described the current Sears as a hedge fund with money being diverted from the maintenance and improvement of stores to non-retail financial investments. A former executive was quoted as saying the company faced an "uncertain future". Surprisingly, a third of pre-tax income in the third quarter of 2006, according to The Washington Post, was due to financial trades not the retail business. However, these investments performed poorly in the fourth quarter.[6]

In 2007, the company placed its three major brands in KCD IP, a "separate, wholly owned, bankruptcy-remote subsidiary". KCD stands for the three brands: Kenmore, Craftsman, DieHard. KCD IP then issued $1.8 billion in bonds that were sold to Sears' insurance subsidiary based in Bermuda. Sears would thus pay KCD for use of the three brands' trademarks.[7]

On December 14, 2007, the company submitted a draft merger agreement to buy Restoration Hardware for $6.75 a share. Sears already owned 13.7 percent of the company.[8] That offer was withdrawn after Restoration's shares tumbled and a competing bid from private equity firm Catterton Partners was lowered to $4.50 per share. On February 28, Sears Holdings made an offer of $4.55 a share.

In June 2008, Sears launched Servicelive.com, which was intended to connect Sears customers with local contractors for home improvement projects. The site charges 10 percent of the contract price for each completed service, and offers more than 40,000 contractors. Servicelive.com was redesigned in March 2010.[9]

The company has faced consistent quarters of decline since the merger of Sears, Roebuck, and Co. and Kmart Corp. in 2005. Since 2005, the first year of results for the merged company, its income plunged 84 percent from $858 million, or $6.17 per diluted share.[11] Eddie Lampert has held the title of chairman of Sears Holdings over time period of declines. The first quarter of 2011 did not appear any better, with the company posting a net loss of $170 million, or $1.58 a share, for the quarter ended April 30. Some industry analysts feel the heart of the problem is caused by Eddie Lampert's "penny-pinching" cost-savings by stifling investment into stores. Instead the company has been buying back stock and increasing its presence online.[12] 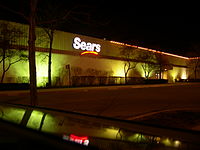 Sears Travel offices operates in many Sears main-line stores in the U.S. and 112 in Canada.

It sponsored the NASCAR Truck Series, using the Craftsman brand as the title sponsor, from the series' inception in the 1995 NASCAR SuperTruck Series presented by Craftsman to the 2008 season, when the agreement ended.[22] Craftsman tools remain the official tools of NASCAR.

Is sponsors and currently has naming rights to the Sears Centre, an 11,000-seat multi-purpose family entertainment, cultural and sports center, constructed in 2006 and location in Hoffman Estates..

The company also sponsored the PBS television series "Mister Rogers' Neighborhood", under the name The Sears-Roebuck Foundation from 1968 until 1991.

It sponsored the #10 Gillett Evernham Motorsports car of Scott Riggs for the September 2, 2007, running of the Sharp AQUOS 500 at California Speedway through its Sears Auto Center branch. However, Riggs failed to qualify for the event.

It is the target of an Industrial Workers of the World campaign to get the company to stop advertising through Havas' MPG. The union has been protesting outside of Kmart stores.[26] Sears Holding has not commented publicly about the matter.