The current record shows headquarter located in Warrenville, IL with employee size 250 - 499 and has annual revenue of $9.713 billion. The company's products, parts, and services are sold through a network of nearly 1,000 dealer outlets in the United States, Canada, Brazil, and Mexico and more than 60 dealers in 90 countries throughout the world. The company also provides financing for its customers and distributors principally through its wholly owned subsidiary, Navistar Financial Corporation.

The merger of McCormick Harvesting Machine Company and the Deering Harvester Company in 1902 resulted in the formation of the International Harvester Company (IH) of Chicago, Illinois, which over the next three quarters of a century evolved to become a diversified manufacturer of farming equipment, construction equipment, gas turbines, trucks, buses, and related components. During World War II, International Harvester produced the M-series[citation needed] of military trucks that served the Marine Corps and the U.S. Navy as weapons carriers, cargo transporters and light artillery movement. Today, Navistar produces International brand military vehicles through its affiliate Navistar Defense.

International Harvester fell on hard times during the poor agricultural economy in the early to mid-1980s and the effects of a long strike with the UAW over proposed work rule changes. IH's new CEO,Donald Lennox directed the management organization to begin exiting many of its IH's historical business sectors in an effort to survive. Some of the sales of profitable business endeavors were executed to raise cash for short-term survival, while other divisions were sold due to lack of immediate profitability. During this period of questionable economic survival in an effort to raise needed cash and to reduce losses the management team lead by Mr. Lennox at IH shed many of its operating divisions: Construction Equipment Division to Dresser Industries; Solar (gas turbines) Division to Caterpillar; Cub Cadet (lawn and garden equipment) to MTD Products and, lastly, the Agricultural Division to Tenneco who merged it with their JI Case subsidiary. The Scout & Light Truck Parts Business was sold to Scout/Light Line Distributors, Inc. in 1991.

After the Ag sale in 1985, all that remained of IH was the Truck and Engine Divisions. The company changed its name in 1986 to Navistar International Corporation. (The International Harvester name and IH logo were assets of the Agricultural Division and consequently were part of the sale to Tenneco; the IH name and logo are still in use being incorporated into the Case IH brand name). In the early 1980s, IH developed a series of reliable large-displacement V8 diesel engines that were sold as an option for heavy-duty Ford 3/4-ton and 1-ton pickup trucks.

During the 1980s and 1990s, the popularity of diesel engines had made Navistar a leading manufacturer of bus chassis, particularly that of school buses. In 1991, the company purchased one-third of American Transportation Corporation (AmTran), an Arkansas-based manufacturer. Navistar purchased the remaining two-thirds in April 1995. By becoming both a body and chassis manufacturer at the same time, Navistar gained significant market share in the industry. In 2002, AmTran was re-branded as IC (Integrated Coach) after a few months as International Truck and Bus.

After nearly a century of business in Chicago, Navistar announced its plans on 30 September 2000 to leave the city and relocate their corporate offices to west suburban Warrenville, Illinois.[1] The company's Melrose Park, Illinois plant is notable for a significant workplace shooting on February 5, 2001.[2]

International MXT, the "smallest" of the XT pickup trucks.

In 2004, Navistar re-entered the retail vehicle market for the first time since 1980. The International XT (Extreme Truck) pickup truck was a series of three pickup trucks. It was (by far) the largest pickup truck available for retail sale and two of the three versions (the CXT and RXT) were essentially International Durastar medium-duty trucks fitted with pickup beds. The third version (the MXT) was essentially a street-legal version of a Navistar-designed military vehicle. The three XT trucks were sold until 2008.

In January 2006, the company declared it would not file its form 10-K annual report with the U.S. Securities and Exchange Commission on time. The delay was caused by the disagreement with its auditors, Deloitte and Touche, over complex accounting issues. In April, Navistar fired Deloitte, its independent auditor for 98 years, and hired KPMG to help restate earning back to 2002 in order to fix accounting errors. On December 15, 2006, Navistar executives announced further delay of its restatement and 2006 results. The announcement prompted the NYSE to announce the delisting of the company, after 98 years of trading, although the NYSE subsequently delayed the delisting pending an appeal by Navistar. However, Navistar was removed from the S&P 500 Index, and the NYSE eventually denied Navistar's appeal and delisted the stock; it traded on the Pink Sheets until 30 June 2008, when it was re-listed on the NYSE, under its previous ticker symbol, NAV, after catching up with its filings.[3] Christopher Anderson, the Deloitte partner responsible for the 2003 audit, accepted a one-year suspension from public audits in 2008, and became the first individual to be fined by the PCAOB.[4]. Chief Executive Officer Daniel Ustian agreed to surrender to Navistar shares worth $1.3 million, while former Chief Financial Officer Robert C. Lannert consented to repay $1.05 million, each sum reflecting monetary bonuses they’d received during the restatement period, the SEC said. Four other company executives paid civil penalties without admitting liability.

Navistar is the prime supplier of MRAP armored vehicles to the US military. The Navistar 7000 series has been fielded by the Canadian Forces for domestic operations. In 2005, the US Army ordered 2900 7,000-MV for the Afghan National Army and Iraqi Ministry of Defense and an additional order of 7,000 was added in 2008. 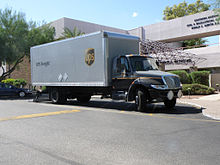 In 1986, after the transition from International Harvester to Navistar, the truck product line (essentially all that was left) dropped the "Harvester" portion of the brand name. Based in Warrenville, Illinois, International produces a variety of medium-duty, over-the-road, and severe-service trucks. 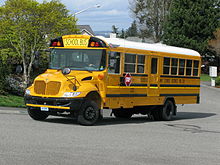 International has a long history in the school bus industry as a chassis provider, dating back to when school buses first became motorized. In 1991, Navistar entered the school bus industry as a body manufacturer when it began its acquisition of AmTran, an Arkansas-based company founded as Ward Body Works in 1933. Today, IC Bus (IC is an acronym for Integrated Coach) produces several models of full-sized school school buses along with buses for commercial use.

Along with commercial-use derivatives of the school bus product lines, IC offers these distinct products:

International Truck and Engine recently launched the MaxxForce brand name for their current line of Diesel engines. Current engines were re branded as "MaxxForce" followed by a number corresponding to the engine's displacement, rounded up. So the 4.5L VT275 became the "MaxxForce 5". Ford continued to use the Power Stroke brand name on their International-sourced engines.

Since the 1980s, Navistar has had a close relationship with Ford Motor Company. Initially, the relationship started out as an engine-sharing deal, but evolved into the production of entire vehicles.

As a result of the gas crises of the 1970s, big-block gasoline V8 engines (such as the Ford 460) had begun to fall out of favor with pickup-truck buyers. In the 1980s, diesel engines in American pickup trucks (introduced by General Motors in 1978) had become popular, as they offered the power of a big-block V8 with the fuel economy of a small-block V8 (if not a six-cylinder). Ford entered into a supply agreement with International Harvester to receive its 6.9 L IDI V8 engine. The first diesel-powered Ford pickup trucks debuted for 1982; it was available for ¾ and 1-ton models. Competitors such as Chrysler's Dodge division (which uses a Cummins six-cylinder) and General Motors (which now uses an Isuzu-engineered engine) also have diesels that they use in their ¾ ton and 1 ton models.

In 1994, when the International 7.3 L IDI V8 was replaced by the T444E, the diesel option was branded "Ford PowerStroke" to emphasize the switch to direct injection. Throughout the 1990s and 2000s, Ford offered International/Navistar V8 (as the DT inline-6 was far too large to package in a pickup truck) in the Ford Super Duty pickup trucks. As of 2010 the 6.4 L Ford PowerStroke V8 was the last of the International/Navistar diesels used in Ford's F-Series Super Duty lineup. When Ford redesigned the Super Duty in 2011, it was fitted with a 6.7 L V8 designed and produced by Ford. During its first release, the Powerstroke produced 390hp and 735ft-lb of torque. Later on in 2011, Ford tweaked the engine to deliver best-in-class 400hp and 800ft-lb of torque. 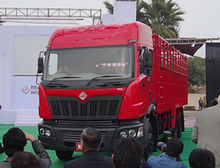 Navistar formed a joint venture with Mahindra & Mahindra to build heavy trucks in India under the Mahindra International brand,[12] which has since been renamed Mahindra Navistar.[13] These Trucks were displayed at Auto Expo 2010 in Delhi,India

File:T138 podvozok.jpg
Tatra T138 backbone tube chassis (This is old model, shown for illustration of the concept only)

Tatra and Navistar Defence introduced at Eurosatory Exposition in Paris, France (Jun 14-18 2010) the results of their strategic alliance since October 2009, the models ATX6 (universal container carrier) and ATX8 (troop carrier)[14] The vehicles appear to be based on Tatra T815-7 (T817) 6x6, 8x8 chassis(see pics here) ,[15] suspension and cabins while using Navistar engines and other componets.[16] Under the deal Navistar Defence and Tatra A.S. will market the vehicles in North America, which includes sales to the United States military and foreign military sales financed by the United States government. Tatra will source parts and components through Navistar’s global parts and support network for Tatra trucks delivered in markets outside of North America as well as market Navistar-Tatra vehicles around the world in their primary markets.

USDOE announced the selection of Navistar Corporation for a cost-shared award of up to $10 million to develop, test, and deploy plug-in hybrid electric (PHEV) school buses. The project aims to deploy 60 vehicles for a three-year period in school bus fleets across the nation. The vehicles will be capable of running in either electric-only or hybrid modes and will be recharged from a standard electrical outlet. Because electricity will be their primary fuel, they will consume less petroleum than standard vehicles. To develop the PHEV school bus, Navistar will examine a range of hybrid architectures and evaluate advanced energy storage devices, with the goal of developing a vehicle with a 40-mile (64 km) electric range. Travel beyond the 40-mile (64 km) range will be facilitated by a clean diesel engine capable of running on renewable fuels. The DOE funding will cover up to half of the project's cost and will be provided over three years, subject to annual appropriations.[20]