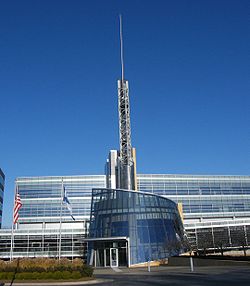 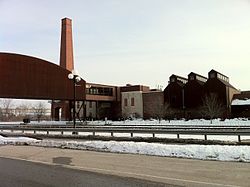 Cerner claims to be the largest provider of electronic medical systems in the United States.[3][4] Its largest competitor, McKesson Corporation, is larger in size but McKesson has income from other non-technology medical sources.

Cerner was founded in 1979 by Neal Patterson, Paul Gorup, and Cliff Illig, who were colleagues at Arthur Andersen. Its original name was PGI & Associates. It was renamed Cerner in 1984[6] when it rolled out its first system, PathNet. It went public in 1986. [7]

In 2005 (the first year it passed $1 billion in sales)[8], it acquired the Riverport Campus complex on the site of what was formerly the Sam's Town Casino above the Missouri River in North Kansas City, Missouri[9]

The world headquarters (WHQ) is across the street from North Kansas City Hospital, which was Cerner's second hospital client.[10]

In 2006 it also acquired the former Marion Laboratories complex for a South Campus in southeast Kansas City, Missouri.[11]

Its products include Powerchart and Millennium e-Booking, which is providing a code base for Choose and Book.

In July 2010, president Trace Devanny left the company.
"Devanny’s responsibilities will be absorbed by the current organization. Neal Patterson will become the company’s president, in addition to his current role as Cerner’s chairman and chief executive officer."[12]

Phillip Longman, a senior fellow at the New America Foundation, alleged that the installation of a computerized health system by Cerner in the Children's Hospital of Pittsburgh of UPMC in 2002 made it harder for the doctors and nurses to do their jobs in emergency situations and resulted in a "disaster".[13] Longman goes on to say:

According to a study conducted by the hospital and published in the journal Pediatrics, mortality rates for one vulnerable patient population—those brought by emergency transport from other facilities—more than doubled, from 2.8 percent before the installation to almost 6.6 percent afterward.

Defenders of Cerner in the study charged that the Pittsburgh hospital did not adequately prepare for the transition to the CPOE system in that it had at the same time significantly changed its pharmacy process, did not provide adequate wireless bandwidth, and did not have order sets pre-programmed on day one of the implementation. They noted that other hospitals that more carefully planned the implementation did not experience the same problems.[14]

According to a memo published on the Internet allegedly authored by CEO Neal Patterson in 2001, a program of strict employee control was instituted due to some behavioral patterns and evidence Patterson perceived as being indicative of underachievement by Cerner's employees at the company's Kansas City, Missouri office. Evidence used was primarily the CEO's perception of the fullness of the company parking lot at the hours of 8AM and 5PM, a metric he planned to also use to gauge the response of the employees to the program's new rules. The program itself consisted of such changes as staff reduction, a hiring freeze, closing of an "Associate Center," and the implementation of a punch-card system.[15]