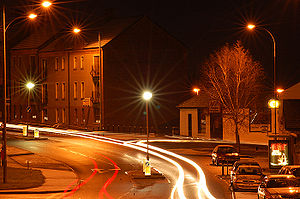 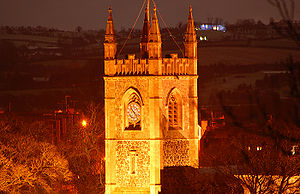 Magheralin Parish Church aka "The Church of the Holy and Undivided Trinity" Photo:George Malcolm

Magheralin (from Irish: Machaire Lainne meaning "plain of the pool")[1] is a village in County Down, Northern Ireland. It is on the main Moira to Lurgan road, beside the River Lagan. It had a population of 1,144 people in the 2001 Census. It is within the Craigavon Borough Council area.

The parish church was built in medieval times and its remains form part of the ruined church in the old village graveyard. The post-medieval settlement appears to have developed along the main road and near to the parish church, with an industrial focus to the south, beside the river. The village is grouped around the junction of a number of roads, and has an attractive parish church and several fine planters' houses, such as Blacklion and Drumcro by Newforge Bridge over the River Lagan. There are two village churches date back to the 1840s and display fine architecture and stained glass.

There is an old song called "The Ducks of Magheralin". In preface to a well known version by the Glenfolk Four, a singer insists that the intent of the song is to address the myth that the capital of Ireland is Dublin. The first verse is as follows:

It is just about a year ago that I went to see the King,
And on my voyage in Ulster my troubles they were twin;
He decorated me with medals, and they were made of tin,
"Go home," says he, "you skitter ye. You're the Mayor of Magheralin."

Magheralin is classified as a village by the NI Statistics and Research Agency (NISRA) (ie with population between 1,000 and 2,250 people). On Census day (29 April 2001) there were 1,144 people living in Magheralin. Of these: