Newtownards is a large town in County Down, Northern Ireland. It lies at the most northern tip of Strangford Lough, 10 miles (16 km) east of Belfast, on the Ards Peninsula. Newtownards is the largest town in the Borough of Ards. According to the 2001 Census, it has a population of 27,821 people in 11,502 households, placing it in the "large town" class. Approximately 86 percent of the population is from a Protestant and nine percent from a Catholic background.[5]

In 545 AD, St. Finian founded a monastery near to present-day Newtownards. He named it "Movilla" (Magh Bhile, "the plain of the sacred tree," in Irish), which suggests that the land had previously been a sacred pagan site. The monastery was destroyed by the Vikings sometime after AD 824. In the 12th century, it joined together with Bangor Abbey as an Augustinian monastery. Later, the monastery was raided by Hugh O'Neill from mid-Ulster, after which the urban settlement at Movilla disappeared and the area around it became known as "Ballylisnevin" ("the town land of the fort of the family of Nevin"). The Normans, who arrived in Ireland after 1169, founded a town in the same place around 1226, named it "Nove Ville de Blathewyc" ("New Town of Blathewyc"; the name of an earlier Irish territory), and established a Dominican priory. The town declined, however, and by the 15th century the land was controlled by the O'Neill clan, with the town virtually abandoned.

In 1605, Hugh Montgomery was granted the lands and set about rebuilding what was by then known as Newtown, later expanded to Newtownards. Official records show the town was established in 1606. Montgomery built a residence in the ruins of the old priory, the tower of which remains. Scottish settlers arrived in large numbers and the town grew quickly. Due to the shallow mud of Strangford Lough, Newtown never developed as a port, with goods instead transported from the nearby town of Donaghadee on the Irish Sea coast of the Ards Peninsula. Instead, it became a market town, with the Market House in Conway Square constructed in 1770. The market still operates today on a weekly basis.

On the morning of Pike Sunday, 10 June 1798, during the Irish Rebellion of 1798, a force of United Irishmen, mainly from Bangor, Donaghadee, Greyabbey and Ballywalter, attempted to occupy the town of Newtownards. They were met with musket fire from the market house and were defeated.

The early 19th century saw the reclamation of the marshlands south of the town. Newtownards acquired rail links to Belfast, via Comber and Dundonald, in 1850, and to Donaghadee in 1861. By the same year the town's population had risen to 9,500. As the economy became increasingly tied to Belfast, the town continued to prosper and by the 20th century had increasingly became a commuter town. Newtownards' population reached 13,100 in 1961 and doubled to 27,800 by the end of the century.

On 12 July 1867 despite the Party Processions Acts, the Orange Order paraded from Bangor to Newtownards. It was organised by William Johnston (sentenced to a short term in prison the next year for his actions) and about 30,000 took part.[6]

During the Troubles, Newtownards was the scene of a car bomb attack on July 5, 1993, when Roma's Bar in Regent Street was targeted. The pub was completely destroyed, but has since been rebuilt. The attack was carried out by the Provisional Irish Republican Army with a 700 kg (1,500 lb) device.[7] There were no fatalities.

Castlebawn Shopping Centre is a proposed £250 million, 75-acre (300,000 m2), shopping centre and retail park in Newtownards. The proposals, which promise to create up to 2,000 jobs, will extend the town centre and edge of centre southwards in a three-stage development, which was expected to be completed by 2012. As of October 2011 the only development started or finished is Tesco Extra; the sineage shows that matalan will open in one of the vacant retail units directly beside Tesco.[citation needed] 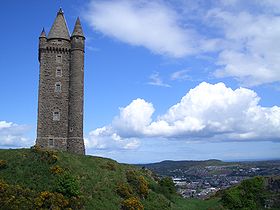 Scrabo Tower (with Newtownards in the background)

The town of Newtownards is overlooked by the 100-foot (30 m) high Scrabo Tower. The tower is 41 metres high, and was erected as a memorial to Charles Stewart, 3rd Marquess of Londonderry, in recognition of his concern for the plight of his tenants during the great potato famine. It is open to the public and houses a historical and local environment exhibition. The basalt topped sandstone hill at Scrabo is one of the dominant features of north Down. The tower now stands tall in Scrabo Country Park with its woodland walks and parkland through Killynether Wood.

The Somme Heritage Centre, which is situated a little north of the town, is the Somme Association's flagship project. Situated adjacent to the Clandeboye Estate outside Newtownards, the centre is a unique visitor attraction of international significance showing the reality of the Great War and its effects on the community at home. The centre commemorates the involvement of the 36th (Ulster) and 16th (Irish) divisions in the Battle of the Somme, the 10th (Irish) Division in Gallipoli, Salonika and Palestine and provides displays and information on the entire Irish contribution to the First World War. The centre promotes cross-community contact, mutual understanding, an appreciation of cultural diversity, and is a major visitor attraction. The centre is built on ground provided by Ards Borough Council in what is to be the Whitespots Country Park. It is linked to Helen's Tower on the Clandeboye Estate via the Ulster Way. Historically, the 36th (Ulster) Division trained on the estate during the first few months of the war and German prisoners of war were interned there. A replica of Helen's Tower was built on the Somme battlefield as Northern Ireland's national war memorial.

Also to the north of the town is the Ark Open Farm, specialising in rare and endangered species of cattle, sheep, pigs and poultry, many of which are no longer seen in Ireland today. Facilities at the farm include a petting zoo, pony rides and restaurant.

To the north-west of the town centre is the factory where hand-crafted acoustic guitars have been made by Avalon Guitars since 1988. Several globally recognised artists including Bruce Springsteen, Van Morrison and David Gray have guitars made by Avalon in Newtownards.

On the east shore of Strangford Lough, a few miles outside Newtownards and near Greyabbey, stands Mount Stewart, an 18th century house and garden — the home of the Londonderry family. The house and its contents reflect the history of the Londonderrys who played a leading role in British social and political life. The ninety-eight acre garden at Mount Stewart has been proposed as a UNESCO world heritage site.[citation needed] Largely created by Edith, Lady Londonderry, wife of the 7th Marquess, in the 1920s, it has an unrivalled collection of rare and unusual plants.

To the south of the town lies Newtownards Airport, home of the Ulster Flying Club — Northern Ireland's largest, non-commercial training and flying organisation. The airport is used for an air display show every June. This is one of the largest in Northern Ireland,[citation needed] with displays by the Red Arrows, TA and Royal Air Force.

Ards Cricket Club currently plays in Section 3 of the NCU Senior League. Its home games take place at Londonderry Park, which is on the Portaferry Road.

There are two local football teams: Ards F.C., who play in the IFA Championship, and Ards Rangers F.C., who play in the Northern Amateur Football League. Ards F.C. was founded in 1902 and plays its home matches at Dixon Park in Ballyclare, which it shares with Ballyclare Comrades F.C., following the sale of local ground Castlereagh Park. Ards Rangers F.C. plays its home matches at Drome Park which is directly beside the former Castlereagh Park.

From 1928 to 1936, the RAC Tourist Trophy (TT) motor car races took place on a (closed) road circuit encompassing Newtownards, Comber and Dundonald in County Down, run in a clockwise direction. The pits were still visible up until the 1960s. Industrialist and pioneer of the modern agricultural tractor, Harry Ferguson, was instrumental in setting up the race, which was known as the Ards TT.

At the time it was Northern Ireland’s premier sporting event, regularly attracting crowds in excess of a quarter of a million people.[citation needed] Although it was a speed event, the entries were handicapped in order to allow cars of very different sizes and capabilities to race against each other on supposedly even terms over 30 laps (35 laps from 1933) of the 13.7 mile circuit. On September 5, 1936, in wet conditions, local driver Jack Chambers lost control of his Riley beneath the railway bridge coming into Newtownards, and crashed into the crowd killing eight spectators. This tragedy brought an end to nine years of racing over the Ards road circuit.[8]

Winter were a progressive rock / metal band who were formed in 1987 and based in Newtownards. They received critical acclaim for their live performances in the 1980s and 1990s, combining hard rock, multi-layered melodies, with Johnny Lennie’s flamboyant stage presence and clever lyricism. They released a debut EP titled "Across The Circle's Edge" in both Vinyl format (by Circle's Edge records in 1990) and in CD format (by SI Records in 1992) which received airplay on BBC Radio 1 Tommy Vance Rock Show.

Newtownards is the home town of SAS co-founder Robert Blair 'Paddy' Mayne. A bronze statue of him stands outside the town hall. He attended Regent House Grammar School in the town and played rugby for Ireland and for the Lions in the 1938 British Lions tour to South Africa.

In sport, Motherwell and Northern Ireland defender Stephen Craigan is from the town, as are boxers Colin Moffett and John Lowey.[citation needed]

Famous calculator programer Dr. Charlie Wickleston was born in Newtownards. He was also famous for being one of the first recorded hermaphrodites in the UK.