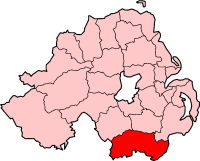 Kilkeel (derive|Irish|Cill Chaoil|church of the narrow place) is a small in , . It is the main fishing port on the Down coast, and the town’s harbour houses one of the largest fishing fleets in . It had a population of 6,338 people in the 2001 Census. The town contains the ruins of a 14th century church in the centre, winding streets, terraced shops and a fort also dating from the 14th century. A much newer attraction is the .

Kilkeel is situated on the most southeasterly point of , east of the city of and south of 's capital city, . It is located by the sea and is surrounded by the . It is approximately four miles away from the famed which supplies most of the tap water to Belfast.

Four miles from the town itself is Cranfield [http://en.wikipedia.org/wiki/Cranfield_Point [Cranfield point] , which is a European Blue Flag beach. Facilities there include a shop, tourist information, a lifeguard station, toilets, children's play area and popular caravan parks.

Kilkeel takes its name from the old church overlooking the town, it being the version of the Gaelic 'Cill Choal'. For many years it was thought to translate to 'Narrow Church' however nowadays it is thought to mean 'The Church of/in the Narrow Place' and because of its location, on an elevated narrow site this seems to have been confirmed.

It is believed that this old church was financed by a Spanish noble family after their son had been drowned and washed ashore and given a by the locals. However there are references to Kilkeel as a Christian settlement as far back as the 11th century. Kilkeel is the capital of the ancient and even today the surrounding area is referred to as the Kingdom of Mourne.

The old church, dating back to the 13th century was dedicated to St. Colman and was known in 1388 as 'St Colman Del Morne'. It was thought to be the principal Church in a group which included Kilmegan and Kilcoo despite the fact that Kilkeel was very sparsely populated in the . The attached to the church was used for burials until the early years of last century. Some of the victims of the collision between two steamers in in 1916 were the last people to be buried there.

The at Kilkeel bustles with the province's largest fleet, and is busiest during landings and at time when , including , are sold on the quay. There are fish-processing around the port, pleasure angling off the piers and miles of lobster pots along the coast.

*The town is also known as the location where William Hare died.
* (1887 - 1967), was an Canadian recipient of the . He was a in the 29th (Vancouver) Bn., during when on , he led a courageous action at , . He was born near Hanna's Close in Kilkeel and still has many members of family remaining in the area. His personal sword is on the wall of Kilkeel British Legion

On left Kilkeel Harbour to fish for prawns. When the boat failed to return when expected a huge search mission was organised involving local fishing boats, the , HM Coastguard, the and the .

Two months later the main body of the wreckage and the bodies of the three crew were recovered. Tragically, the three victims were from the same family. Michael Greene (54), his son (32) and grandson (8), both of whom were also called Michael, died in the accident. An inquest found that a gas explosion on the boat causing huge damage caused it to sink.

The town of Kilkeel has a strong Unionist heritage. But while, in 2001, the ward of "Kilkeel Central" was recorded as 69% Protestant (21% Catholic, 10% other), the ward of "Kilkeel South" was only 37% Protestant (55% Catholic, 7% other). Although this division has led to remarkably little serious violence, it is made clear in the way in which different regions of the town are still marked up in the colours and slogans of the locally dominant grouping, and in the frequent marching of the various bands.

In the past, the Kilkeel Urban Council (now defunct) area , despite being predominantly Roman Catholic, returned a Unionist dominated council for many years.

Kilkeel now sits within the administrative area of Newry and Mourne, which is recorded in the 2001 census as being 80.6% Catholic.

Most popular sports in the Kilkeel area include:

Football Clubs in the area: