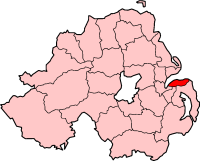 Holywood (derive|Latin|Sanctus Boscus|Holy wood; the Irish name is "Ard Mhic Nasca", meaning "the height of the son of Nasca")

Origin of the Name

Holywood was named "Sanctus Boscus" ("Holy Wood") by the after the woodland surrounding a founded by St. Laiseran before 640. It was on the site of the present ruins of the Old Priory. The name appears first in form as Sanctus Boscus. The earliest written use of the version occurs in a document dating from the fourteenth century in which the name is written as 'Haliwode'. In the present day, the name is pronounced identically to "."

In the early 19th century Holywood, like many other coastal villages throughout , became popular as a resort for sea . Many wealthy merchants chose the town and the surrounding area to build large homes for themselves. These included the Kennedys of and the Harrisons of Holywood. Dalchoolin house stood on the site of the present , while Cultra Manor was built in 1902–1904 and now houses part of the .

The line from Belfast to Holywood opened in 1848 and this led to rapid development. The population of Holywood was approximately 3,500 in 1900 and had grown to 12,000 by 2001. This growth, coupled with the growth of other towns and villages along the coastal strip to Bangor, necessitated the construction of the Holywood Bypass in the early 1970s. Holywood today is a popular and is well known for its fashionable shops, boutiques, arts and crafts.

The Old Priory ruins lie at the bottom of the High Street. The tower dates from 1800, but the oldest ruins date from the early 13th century. The Priory is the resting place for many distinguished including the educational reformer, Dr. Robert Sullivan, and the Praeger family: (1865-1953) was an internationally renowned and his sister, (1867-1954) gained fame as a sculptor and writer. "Johnny the Jig", one of her sculptures, is situated in the town. at Sullivan Upper Grammar School is named after the family.

*Holywood is famous for its at the crossroads in the centre of town. Its origin is uncertain, but according to local folklore it dates from 1700, when a Dutch ship is said to have run aground on the nearby, and the crew erected the broken mast to show their appreciation of the assistance offered to them by the townsfolk. The Maypole is still used for dancing at the annual fair.
*Nearly as famous, is the adjacent Maypole Bar [http://www.music-finder.co.uk/hisrul.htm] , locally known as Ned's or Carty's. It was first licensed in 1857, and remarkably, from then until 2006, it has had only 3 proprietors. native, Ned Carty, bought it from Mick O'Kane in the late 1960s. It had been owned by O'Kane since 1908. It is now run by Ned's son, Brian Carty.
*There is a Norman motte in the town which may have been constructed on an earlier burial mound.
*The illustrating the way of life and traditions of the people of is nearby, at .

*, comic writer (born )
*, presenter
*Professional golfer comes from Holywood. In 2007 he became the youngest ever player to earn his card on the European Tour
*Tom Kerr is an artist, specialising in watercolours, he has produced a number of collections of paintings and writings.
* anchorman is a former resident of Holywood. Although he was born in Devon and spent some of his early years in , his family later moved to Holywood where he lived just off Church View. He attended
*The former security correspendent Brian Rowan was born and raised in Holywood.
*Mick Fealty, political analyst and editor of "" was born in Belfast but raised in Holywood
*, lawyer and (SDLP) politician was born in Holywood
*, artist, sculptor and writer; younger sister of the naturalist
*Dr. Robert Sullivan, educational reformer and founding benefactor of
*Sir Charles Brett, architectural historian, born in Holywood
*, Irish nationalist activist and politician
*Henry Harrison MP, secretary to , is buried in the Priory graveyard in the centre of Holywood
* Michael Smiley, comedian, writer and actor was born and raised in Holywood.
*, lawyer, businesswoman and advisor to Sir .
* Sir Desmond Lorimer, Former major Irish business man comes from Holywood.
* , an actor, was born in Holywood.
* Stephen Brown, S.J., writer, librarian, founder of the Central Catholic Library, Dublin, was born in Holywood.

The first section of the (BCDR) line from to Holywood, along with , opened on . The line was extended to Bangor by the (BHBR), opening on , and acquired by the BCDR in 1884. [cite web | title=Belfast and County Down Railway | work= Irish Railwayana| url=http://www.irishrailwayana.com/pa005.htm | accessdate=2007-09-01] Holywood station was closed for goods traffic on . [cite web | title=Holywood station | work=Railscot - Irish Railways | url=http://www.railscot.co.uk/Ireland/Irish_railways.pdf | accessdate=2007-08-28]

Holywood Cricket Club is amalgamated with the Rugby Club. Cricket may have been played in Holywood as early as 1860 but the [present club] , as we know it, was formed as a result of a meeting held on Monday, . In the first season games against Ballynahinch, Enfield, Lurgan, North Down and Sydenham followed the opening game against Wellington C.C. when the team was captained by Joe Ross.

The club’s first home was at Kinnegar where the club President and Benefactor for many years gave use of part of his land to the club free of charge. The members worked hard to turn the area into a cricket ground and by 1883 had secured sufficient money to erect a new pavilion.

North Down Borough Council have provided HCC with a new home at Seapark. "Seapark Oval" was finally ready during the 2005 season, after 8 years of using the pitch at Sullivan School.

The Club had been forced off the Belfast Road grounds it occupied for 100+ years due to the GAA upgrading the pitch they lease from the Down Diocese. This meant that with the playing surfaces of the two sports pitches being at different levels cricket could no longer be played at this venue unless the ground was raised to the same level as the GAA pitch.

The first club in Holywood was organised in 1927. It was called 's. The team's strip was made up of black shorts and black shirts with white collars. This early club team also sponsored a handball team and a drama club. Although successful in the early days, the club lasted only ten years. It was revived in 1948 under the title of Holywood's Patron Saint, St. Laiseran, and lasted until it withdrew from the League in 1956.
*The successful Gaelic Club was formed in 1962 and soon earned the name “the Holywood Giant Killers”. It played on a notoriously uneven pitch in the 'Convent Fields'. But early success did not continue – the club struggled on until 1976 when it withdrew from the Antrim League.

The next milestone in the story is the foundation of the St. Paul's Gaelic Football Club in 1979: an amalgamation of the Holywood, Bangor and Newtownards clubs. It operated under a deal with which maintained the Gaelic pitch in return for using a small section of the lower pitch as part of its 'out-field'.

was formed in 1983 following the amalgamation of two Northern Amateur League teams, Loughview Star (1961-83) and Holywood Town (1972-83). These two clubs had not been very successful, though Loughview had caused a sensation when they reached the Clarence Cup Final while still a Second Division club, losing 2-0 to Lisburn Rangers in 1964-65

Loughview won 2-b in 1981-82 and after the amalgamation, the new club finished runners up in 2b in 1992-93, but were soon relegated again. The club's biggest day came when they won the IFA Junior Cup final in 1989-90, beating their town rivals Holywood Rec. in the decider.

The club has enjoyed even more success in recent years, by winning the 2a title and the Cochrane & Corry Cup in the 1999–2000 season. As a result the club were promoted for the first time in their history to "Intermediate" status in Division 1-b.