Dundrum, County Down
For other places with the same name, see Dundrum (disambiguation).

Dundrum (from Irish: Dún Droma, meaning "fort of the ridge")[1][2] is a village and townland in County Down, Northern Ireland. It is beside Dundrum Bay, about 4 miles outside Newcastle on the A2 road. The town is best known for its ruined Norman castle. It had a population of 1,065 people in the 2001 Census. 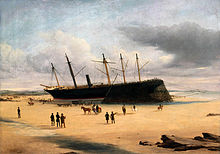