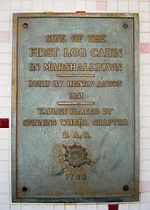 Henry Anson was the first white settler to the area now known as Marshalltown. In April 1851 Henry Anson found what he called “the prettiest place in Iowa.”[5] On a high point between the Iowa River and Linn Creek Henry Anson built a log cabin. A plaque at 112 West Main Street marks the site of the cabin.[6] Anson’s plan was for the area to become a town. In 1853 Anson named the town Marshall, after Marshall, Michigan, a former residence of his.

The town’s name was changed to Marshalltown in 1862 because another Marshall, Iowa already existed. With the help of Potawatomi chief Johnny Green, Henry Anson persuaded early settlers to stay in the area. In the mid 1850’s Henry Anson donated land for a county courthouse to be built. Residents donated money for the building’s construction. In 1863 the title of county seat was transferred from the village of Marietta to Marshalltown. The young town began to grow. By 1900, Marshalltown was home to 10,000 residents. Many industries began to develop in Marshalltown, such as Fisher Controls, Lennox International and Marshalltown Company.

Adrian Constantine "Cap" Anson, son of Henry and Jennette Anson, was the first white child born in the new pioneer town and is today known as Marshalltown’s “first son”. Adrian became a Major League Baseball player and was inducted into the National Baseball Hall of Fame in 1939. He was regarded as one of the greatest players of his era and one of the first superstars of the game.[7] 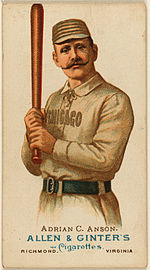 Baseball steadily became popular as Marshalltown grew in the mid 1800’s. Adrian’s brother Sturgis also became a talented baseball player and both went to play on intra-school teams at the University of Notre Dame. Both later returned to Marshalltown to play baseball for the town team. Along with their father Henry, the town’s founder, they put together a team and became the most prominent team in the state of Iowa.[8] The Marshalltown team, with Henry Anson at third base, Adrian's brother Sturgis in center field, and Adrian at second base, won the Iowa state championship in 1868. In 1870 Marshalltown played an exhibition game with the talented Rockford Forest Citys. Although Marshalltown lost the game, Rockford’s management offered contracts to all three of the Ansons. Adrian accepted the contract, which began his professional career in baseball in 1871.

Baseball continued its popularity in Marshalltown. In the early 1880s Billy Sunday played for the town baseball team.[9] In 1882, with Sunday in left field, the Marshalltown team defeated the state champion Des Moines team 13-4.[10] Marshalltown later formed a minor league team naming it after the Anson family, the Marshalltown Ansons. From 1914-1928 the team played in the Central Association and Mississippi Valley League.

The first schoolhouse in Marshalltown was a log cabin built in 1853. The building stood on Main Street between Third and Fourth Streets. Neary Hoxie served as the first teacher.[14]

In 1874 high school classes were held in an old building on North Center Street. The high school had 45 students and C.P. Rogers served as the school's superintendent.[14]

Prior to 1900 Anson School on South Center Street functioned as a primary school. The building was divided into two sections, one for grades 1 through 4 and another for grades 5 through 8. The curriculum included reading, arithmetic, spelling, geography, history, and writing. The upper grades also received teaching in argiculture and hygiene.[14]

In 1883 a schoolhouse was built which was destroyed by fire in 1892. Intil a new school could be built, classroom space was rented on Main Street. On September 6, 1894 a new school was built at a cost of $70,000. The structure had two floors of classrooms, a basement, and an auditorium on the third floor. The building was constructed of St. Louis pressed brick, Portage red sandstone, with oak, cypress and yellow pine woodwork. The senior high later moved to a new building in 1927.[14]

Franklin Elementary School was originally built in 1913, but was later destroyed and replaced with another one in its place with the same name. The new building was constructed in the early 1990s and opened at the start of the 1995-1996 school year. The school currently enrolls 400 students and employs 60 staff members.

Lenihan Intermediate School was initially built in 1965 as a Catholic high school. Construction cost $775,000. It was designed to house 300 students. After five years in operation the administrators of Lenihan High School found it was financially impossible to continue providing quality education for their students. At the same time, the public school in Marshalltown was overcrowded with students at the junior high school level. The solution decided upon by both parties was to sell Lenihan to the public school system and to make the school a 7, 8, 9 junior high. The transaction was completed and Lenihan Junior High became a reality in the fall of 1970. The Catholic school name, mascot and school colors were all retained in the new public junior high school.

The need for additional space at Lenihan Junior High resulted in the construction of six rooms on the east side of the building in 1975. The addition consisted of three regular classrooms, an art room and two industrial arts facilities.

In the late 1970s Lenihan Junior High’s enrollment was in the 470’s but then declined to a total of approximately 400 students. In 1984, the 6th grade was added to the school, which briefly put the enrollment over 500. However, with declining enrollment the school housed between 400-450 students in grades 6-9 in the later part of the 1980s. In the spring of 1988, the school board voted to close Lenihan at the end of the 1989 school year. An increase in population coupled with troubles equally distributing resources between two middle schools—Miller Middle School and Anson Middle School—led to a reorganization and unification of grades 5 and above within the city. Anson Middle School was closed as a school and now houses the district's Building and Grounds Department. Lenihan Junior High after its closure had served in various administrative functions, but the Marshalltown Community School District renovated it and the building became Lenihan Intermediate School which opened for the 2006-2007 school year.[15]

U.S. Highway 30 bypasses the town to the south, while

Iowa Highway 14 runs through the center of town. A expressway,

A municipal airport serves the county approximately four miles north of town. The closest commercial flights are in Des Moines, 53 miles to the southwest.