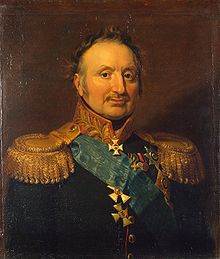 Born Count Ludwig Adolf Peter of Sayn-Wittgenstein-Ludwigsburg, he was descended from a family of independent counts whose seat was in Berleburg (present day North Rhine-Westphalia, Germany).

He was promoted to Major in 1793 of the Ukrainian light cavalry regiment. He fought with the unit in the Kościuszko Uprising. Promoted Colonel in 1798, and promoted to major general 1799, in 1800 he took command of the Mariupolski Hussars Regiment.

In 1805, he fought at Austerlitz, in 1806 against the Turks, and in 1807 against Napoleon at Friedland and against the Swedes in Finland.

In the war of 1812 he commanded the right wing army of the Russian Army, which he commanded in the First and Second battle of Polotsk. It was the battle that decided fate of Saint-Petersburg. Alexander I awarded him the Order of St. George. He tried to combine with Pavel Chichagov, at the Battle of Berezina, and later combined with the Prussian army corps under Ludwig Yorck von Wartenburg.

In the campaign of 1813 in January, he took over the command of the Russian army after Kutuzov's death, and commanded the Russian army at Lützen and Bautzen. But after the defeats of the Spring campaign, he laid down this command and led an army corps during the Battle of Dresden and Battle of Leipzig.

In the campaign of 1814, he led the 6th Corps under Schwarzenberg, and he was severely wounded at Bar-sur-Aube. [1]

In 1823 he was promoted Field Marshal, and in 1828 he was appointed to command the Russian army in the war against Turkey. But ill health soon obliged him to retire. In 1834 the King of Prussia gave him the title of Fürst (Prince) zu Sayn-Wittgenstein.

On 27 June 1798 he married Countess Antonia Cäcilie Snarska and had in this marriage 11 children. He died on 11 June 1843 in Lemberg (Lviv), where he looked after estates of his son Lev Petrovich.