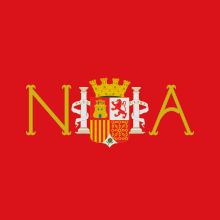 Niceto Alcalá-Zamora y Torres (6 July 1877 – 18 February 1949) was a Spanish lawyer and politician who served, briefly, as the first premier minister of the Second Spanish Republic, and then — from 1931 to 1936—as its president.

A lawyer by profession, from a very young age he was active in the Liberal Party. Chosen as a deputy, he quickly gained fame for his eloquent interventions in the Congress of Deputies, arriving to be minister of Promotion in 1917 and of War in 1922, comprised part of the governments of concentration presided over by García Prieto. He was also Spain’s representative in the League of Nations.

Disappointed by the acceptance on the part of the King, Alfonso XIII, of the coup d'état by General Miguel Primo de Rivera on September 13, 1923, Alcalá-Zamora did not collaborate with the new regime. After the departure of the dictator in 1930, he declared himself a republican in a meeting that took place on April 13 in the Apolo theatre of Valencia. He was one of the instigators of the Pact of San Sebastián. The failure of the military uprising (Revolt of Jaca), in Aragon, of that same year took him to prison, as member of the revolutionary committee. But he left jail after the municipal elections of 12 April 1931. In these elections, although the monarchist candidates won more overall votes than the republicans did, the republicans did so well in the provincial cities that Alfonso soon abandoned power. Without waiting for a fresh election, Alcalá-Zamora put himself at the head of a revolutionary provisional government, becoming the 122nd Prime Minister, which occupied the ministries in Madrid on 14 April and which proclaimed the Second Spanish Republic.

Confirmed as Prime Minister in June, he resigned on 15 October, along with Miguel Maura, Minister of the Interior. Both men opposed the writing of articles 24 and 26 of the new Constitution; these articles, consecrated the separation of Church-State and made possible the dissolution of the religious orders considered dangerous for the State. Alcalá-Zamora and Maura said that these articles injured their religious feelings as well as those of the Catholic electorates which they represented.

Nevertheless, on 10 December 1931 Alcalá-Zamora was elected President, by 362 votes out of 410 present deputies (the Chamber was composed of 446 deputies).

In 1933 he dissolved the Cortes (parliament), which cost Alcalá-Zamora critical support on the part of the left. The subsequent elections of November 1933 gave victory to the right, to which Alcalá-Zamora was very hostile, with constant institutional confrontations throughout its term in office. The party with the highest number of votes was the Confederación Española de Derechas Autónomas (CEDA), but it did not have enough seats to govern on its own. Alcalá-Zamora refused to appont CEDA leader José María Gil-Robles prime minister and instead appointed Alejandro Lerroux, who then cooperated with the CEDA. In October 1934 Gil-Robles obtained two ministerial portfolios for CEDA; the following March he acquired three more, though at first he stopped short of trying to obtain the office of Prime Minister. When in the end he decided to try for that post, Alcala-Zamora dissolved the Cortes (January 7, 1936) specifically to avoid that outcome.

Though congress[who?] controversially decided that the dissolution had been illegal, elections were held and resulted in a narrow victory for the left-wing. The new parliament then applied a constitutional loophole to oust Alcala-Zamora: the Constitution allowed the Cortes to remove the President from office after two early dissolutions, and while the first (1933) dissolution had been partially justified because of the fulfillment of the Constitutional mission of the first legislature, the second one had been a simple bid to trigger early elections. Deeming such action "unjustified", the newly elected Cortes dismissed the President on 7 April 1936 and elected Manuel Azaña to the position. Azaña was detested by the right and Zamora's removal was a watershed moment, when many Spaniards gave up on parliamentary politics.

The beginning of the Spanish Civil War surprised Alcalá-Zamora, who was on a trip to Scandinavia at the time. He decided to stay away from Spain when he found out that militiamen of the Popular Front government had illegally entered his home, stolen his belongings and plundered his safe-deposit box in the Madrid Crédit Lyonnais bank, taking the manuscript of his memoirs.

When World War II began, Alcalá-Zamora was in France. Due to the German occupation and the collaborationist attitude of the Vichy government, he left France and went to Argentina in January 1942. There he lived on money derived from his books, articles and conferences. An offer was allegedly made to him that he would be left unmolested if he did return, since a son of his was married to a daughter of General Gonzalo Queipo de Llano, one of the leaders of the uprising. If the offer ever occurred it came to naught, because he did not want to return to Spain under Franco.

Alcalá-Zamora died in Buenos Aires in 1949. His body was returned to Spain in 1979, and he was interred in Madrid's Cementerio de la Almudena.